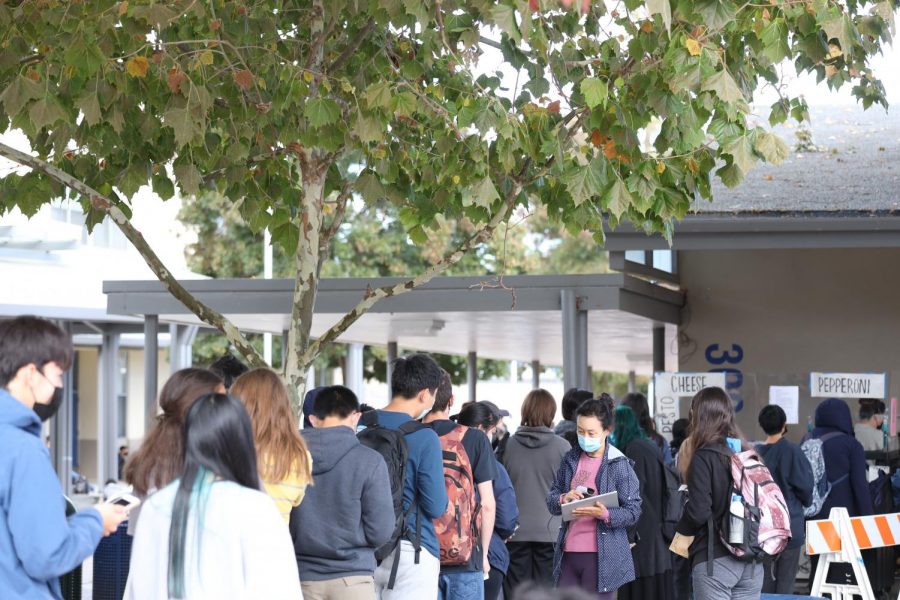 Students at Los Altos High School have been facing long lunch lines because of the influx of students receiving lunch from school.

By Rebekah Park and Nayeon Kim

The state’s free lunch program has also led more students to get lunch at LAHS, a leading cause of the longer lines. However, LAHS cannot open up additional pizza carts to combat this problem due to Mountain View Los Altos School District cafeteria service funding issues. More pizza carts require more cafeteria staff, which is in the District’s control. There are also less Parent Teacher Student Association volunteers to staff the carts, according to Assistant Principal Galen Rosenberg.

Due to the lengthy lines — spanning the length of the quad or longer — some students prefer to simply wait out the crowd of people for about 15–20 minutes before entering the lines. But sometimes there isn’t enough food remaining for students who arrive late at the pizza carts, due to the District’s waste management efforts and funding limitations imposed on the District through California’s free-lunch program funding allocations.

Exacerbating the long wait times, students often cut in front of one another, in hopes that their wait time will be shortened. Cutting is the most prominent student-induced issue that has risen from the long lines. Students, frustrated with the extensive line, approach their friends to reduce even a minute’s worth of wait.

Sophomore Dylan Gibson recorded the time from when he first stood in line to when he received the pizza, which took approximately 13 minutes. During these 13 minutes, about 13 people cut in front of him in line.

“People either cut you or you cut them,” sophomore Georgia Bradley said. “You have to cut into the front if you want to eat, otherwise they’re like, ‘Oops, we’re out of food.’”

Many students admitted to cutting when asked, most just seeing friends in the line and grouping together to talk.

Rosenberg said there are measures being taken to this issue through parent volunteers and teachers. However, there has been no administrative action as this issue isn’t pressing enough to warrant immediate attention.

“There are problems that are a concern, but there isn’t really a clear or cost-benefit-wise reason to address them as a priority,” Rosenberg said. “I would not put it up in the list of critical issues that need to be addressed immediately.”