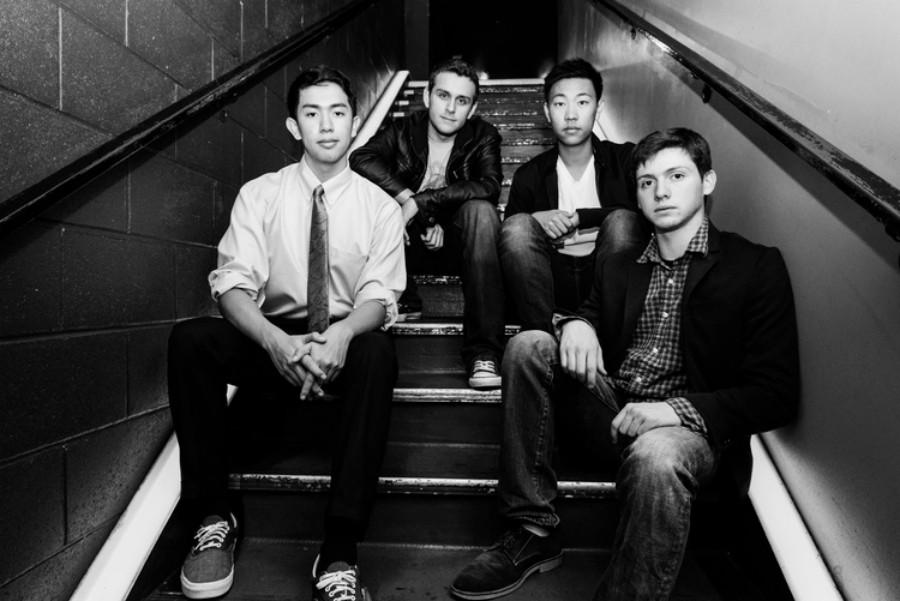 By Jessica King and Cole Hanson

Peaceful music plays in the background of the promotion video as senior Brad Guesman sits on a bench in a park, holding a glass.

However, an alarmed look begins to settle over his face as a humming noise rises in volume before exploding into a guitar riff. Block letters flash across the screen, announcing  the release of 37th Parallel’s first album, “Escape,” on Sunday, August 23. The letters advertise that the band’s debut album will be available on iTunes and Spotify.

This video is part of an online campaign the local band has conducted since raising over $10,000 through Kickstarter last winter to record their album. 37th Parallel first began to gain attention after winning second place in the 2013 Battle of the Bands. From there, it expanded to opening for the local band stage at the music festival BFD in 2014. Now, the band — consisting of guitarist and lead vocalist Brad along with Mountain View High School  seniors drummer A.J. Pelayo, bassist Eric Dyer and pianist Philip Chang — is fulfilling another milestone with its upcoming release of its debut album, “Escape.”

The band’s release of their single “She’ll Be Mine” on Sunday, August 9, served as a teaser for the full album, which was recorded over the 2014-15 winter break in Oakland.

For seven days, the four boys holed up in the recording studio, doing little but sleeping, eating and making music.

“[Recording the album] was a mix of surreal performance capability I’d never seen in myself before and that kid-in-a-candy-store vibe,” Brad said. “I’ve never before set aside the time to work so intensely on something like that. When I relinquished all responsibilities but the music, I quickly reached optimum performance mode. It was a remarkable experience — I think back to it and wish I could feel that ‘flow’ in my everyday life.”

While waiting for separate parts of the songs to be recorded, the band had access to a variety of amenities that included a stocked kitchen, multiple couches, a flat-screen TV, an Xbox 360 — but most excitingly, dozens of amps, instruments and vintage effects machines to experiment with and explore.

“We pulled out an old 1970s Mutron Phasor II [guitar effects pedal] to use on a certain guitar part, and the second I plugged it in, it started sparking and smoking,” Brad said. “While I panicked, John, [the producer and sound engineer], deftly pulled the cord from the wall socket and kicked the box under the nearest control unit. It’s the little stuff like that — that’s what you remember.”

After completing the recording, the band spent the rest of the time mixing the music. The entire process of merging hundreds of separate instruments and tracks into each individual song took about twice as long as the recording itself.

Brad acts as the main songwriter for the band, and for him, the songwriting process follows several steps.

“My songs start out with a small idea — maybe it’s a riff I discover on the guitar, maybe it’s a synthesizer sound I program on Logic, or maybe it’s just a sound in my head,” Brad said. “Regardless, every song starts with a sort of seed of inspiration. I don’t really know where it comes from, but all I can say is that I’m glad it hasn’t stopped coming.”

From the initial idea, Brad fleshes out a song with words and structure that illustrates the source of inspiration. After the lyrics are written, Brad fills in the rest of the song with the addition of musical instruments.

Finally, after recording the piece, Brad works with a producer to sand down and smooth out the rough edges.

“The final touches are added with the help of a producer, who will help you pare down your songs to be more concise, as well as help add color and interest to your instrumentation,” Brad said. “In tandem with the songwriter, of course.”

Brad’s favorite song on “Escape” is one of the slower ballads, titled “My Name,” which he calls the one true ballad of the record that fully encompasses the meaning of the album and the message the band is trying to portray.

“I’m hoping that in the exposure of some of my own feelings, somebody will listen to one of our songs when they feel a certain way and learn that they’re not the only one who’s felt that way,” Brad said. “That they aren’t alone in the universe.”

37th Parallel anticipates that having an album out will help them land larger gigs and reach wider audiences.

“On a professional level, an album is essentially a business card that helps you land gigs and attract attention,” Philip said. “The first thing an event organizer will ask us if we want to land a big gig is: send me your album.”

For the immediate future, the band will continue to work on improving, innovating and exploring their music.

“After promoting the album, we are looking to further develop our sound with some new refined originals, exploring different sounds and directions the band can take, and maturing individually as artists,” Philip said.

With 37th Parallel’s rising success, fans will surely continue to rock out to their music, new and old, with a glass of chocolate milk in hand.