Living by the Numbers: Mathletes on Campus 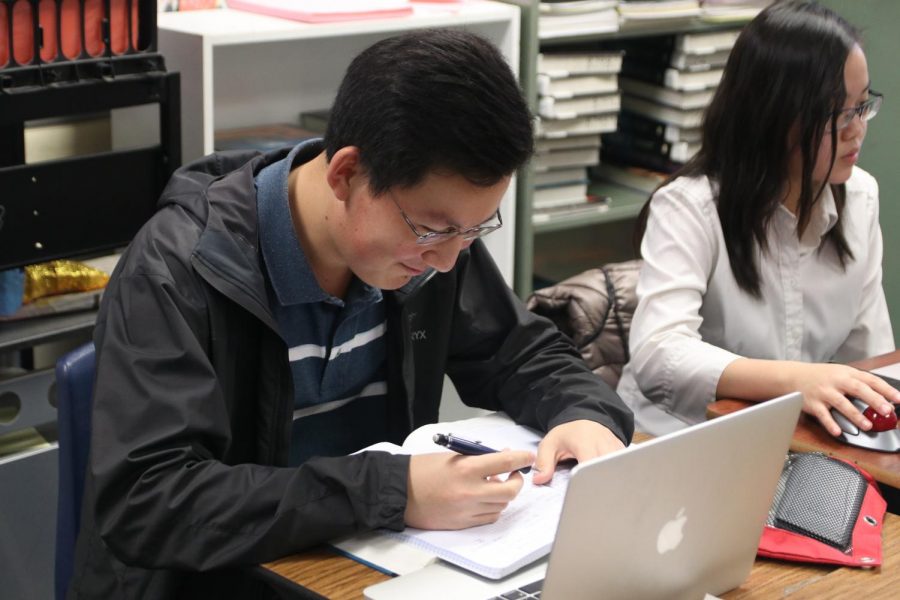 By Danny Vesurai and Justin Yu

Los Altos mathletes live and breathe in numbers. For these students, math extends beyond just the skills learned in class: they challenge themselves to apply their problem solving skills in math competitions.

Student compete in two primary types of competitions — ones that are purely mathematical and focus on subjects like algebra, geometry and probability, and statistics-based ones that deal more with tangible, real-world problems. Students on Math Team compete in the first type, and students in Math Modeling Club in the latter.

Nationwide, thousands of students, like sophomore Daniel Hu, annually take the rigorous 25-question, 75-minute American Math Competition (AMC). If they do well enough — generally the top 2.5 or 5 percent of scorers — they qualify for the 15-question, three-hour American Invitational Mathematics Examination (AIME). And if they do well enough on that, they qualify for the six-question, nine-hour United States of America Mathematical Olympiad (USAMO) — 301 students qualified this year.

For students like Daniel, the reward of competition math is that it prioritizes problem solving skills over plugging inputs into formulas. Rather than drilling the same concepts over and over in math class, competition math forces students to critically think on their feet.

“School math is you learn a formula and you apply it, but Olympiad math is you’re given a problem that you have no background in and you have no clues on how to solve it,” Daniel said. “You have to use what you know to solve it and come up with a solution on your own.”

Beyond the traditional AMC circuit, which only offers individual competitions and focuses on proof-based problems, math modeling challenges offer opportunities for groups to tackle broader, more real-world problems in longer stretches of time. For example, the Math Modeling Club participated in last year’s 14-hour Moody’s Mega Math Modeling Challenge to determine safety levels for the National Park system in relation to sea tides and wildfires, and how to best allocate resources among the parks overall.

Out of 1,121 teams, Los Altos’ Team #9789 was one of 78 to gain an honorable mention and win $1,000 last year. After analyzing datasets, making assumptions and conducting statistical tests, the team compiled a 19-page paper to answer the three-part problem.

For Ryan, math modeling contests are more appealing than AMC contests because concepts from math classes are still applicable and practical. Because being proficient at Olympiad math depends on knowing higher-level concepts not taught in math classes, there’s a higher threshold to clear.

“The math that you actually do in class, you can actually apply that to math modeling,” Ryan said. “In math modeling, as long as you know the basic concepts, you can get by. Even if you don’t know advanced statistics, you can make simpler assumptions.

“[In competitions like the AMC, ] if you don’t study the hell out of the [Art of Problem Solving] Wiki and read everything and you try to use linear equations, you’re never gonna solve [a problem]. It’s gonna take you like 10 years. So if you don’t study techniques on the advanced contests, you’re just gonna sit there for 30 minutes and feel really dumb. I never did all the extra work to stay competitive so I just stopped.”

Junior Karina Halevy, who is Math Team’s Co-president but also participates in math modeling competitions, said she enjoyed competing in both types equally, since they reflect two sides of the same topic. She describes math modeling as a synthesis of math, writing and research and traditional math competitions as “pure math.”

But although Los Altos does have a fair number of students involved in these activities, math competitions are still associated with a stigma of “nerdiness” that can deter students from pursuing them in the first place. With more emphasis on teaching creativity in problem solving, Karina said, more students at Los Altos would be able to explore the beauty and artistry of the field that is mathematics.

“I think at the curricular level we can integrate more in-depth problem solving and that would help encourage people to venture out and try challenging math instead of us being weirdos and nerds and geeks,” Karina said. “Math is elegant and artful but at the same time it’s methodical and unambiguous. It’s euphoric when I discover a solution to a hard problem.”