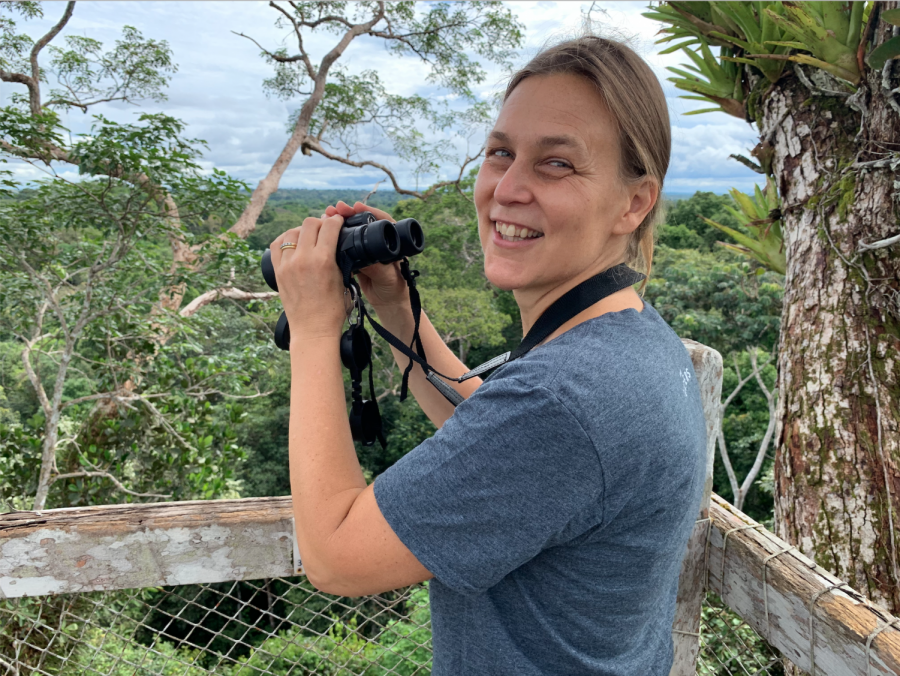 Having studied giant sea snails off the Bahamas and taught in the Netherlands, science teacher Linda Hambrick is not your average science teacher. She's delighted to return to the Los Altos community, what she considers home.

From researching giant snails in the Bahamas to observing shark species in Baja California to teaching in the Netherlands, Linda Hambrick is almost as cool as Bill Nye.

Hambrick was raised in every nature-loving kid’s paradise. She was born in Texas and moved to Oklahoma when she was five, growing up in a house located right across from a forest full of life and creeks. Those first curiosity-filled explorations were the start of her path to pursuing a career in biology.

“We would build forts and swim in ponds in the summertime, catch toads and crawdads and all kinds of stuff,” Hambrick said. “That’s definitely where I started spending a lot of time outside looking in, observing and discovering the natural world.”

As a teenager, Hambrick continued to spend her time outdoors, starting to scuba dive regularly when she was just 13.

She went on to study biology at the University of North Texas, but transferred to Principia College in Illinois in her sophomore year to complete her undergraduate degree.

After graduating in 1993, Hambrick decided to pursue her initial love of marine life by immersing herself in her work as a marine biologist. Hambrick studied a species of giant sea snails called the Queen Conch on a tiny remote island in the Bahamas, where there was only one phone for the entire island.

Besides years of studying snails, Hambrick has several other impressive research experiences under her belt: She has marked the nests of sea turtles in the Cayman Islands, measured the length of different shark species in Baja California and participated in three different labs at Stanford.

After years in the field, Hambrick’s transition into teaching was nearly accidental. In a free period between studies, she took up a middle school substitute teaching position in California near Los Altos, which she said turned out to be one of the most challenging yet rewarding experiences she ever had.

“I don’t know if I’ve ever worked so hard in my life,” Hambrick said. “Every morning I was up at six trying to figure things out and wouldn’t go to bed until 10. That was my schedule for almost all year. It was insane, but I fell in love with the process. I really loved biology and the content, but I’m also fascinated by how people learn differently.”

Hambrick then enrolled to get her teaching credential and Master of Biology at San Jose State University in 2000, and has been teaching ever since.

In 2003, Hambrick and her husband moved to the Netherlands, where they lived for 12 years. Hambrick taught middle school science at an international school, where she became a student herself as she adapted to an entirely new culture.

“Moving taught me to be more open minded,” Hambrick said. “Living in the Netherlands, there were different cultural rules. I really felt like I was a baby again and had to learn how to be, how to interact socially, what was acceptable or not.”

After moving back to the United States, Hambrick taught high schoolers for the first time at South San Francisco High School, where she found her true calling.

“I was just like, ‘Oh, where have you been all my life?’” Hambrick said. “I love people of all ages, but high school is just super enjoyable. I like the students. I like the topic. I liked the in-depth discussion. This is my group.”

While she loved teaching in San Francisco, Hambrick was finally drawn back to Los Altos, where she had lived before moving to the Netherlands, to work at LAHS.

This upcoming school year, Hambrick will be teaching environmental studies and biology, where she hopes to bring the joy of studying life to her students, overcoming the distance learning barriers.

“We’re going to see how we can get students outside, which I think is really important,” Hambrick said. “It’s distance learning, not online learning, and there’s a difference. I want to make sure that my students are out mapping green spaces, being aware of what’s around them, applying what they’re learning to the local ecosystems.”