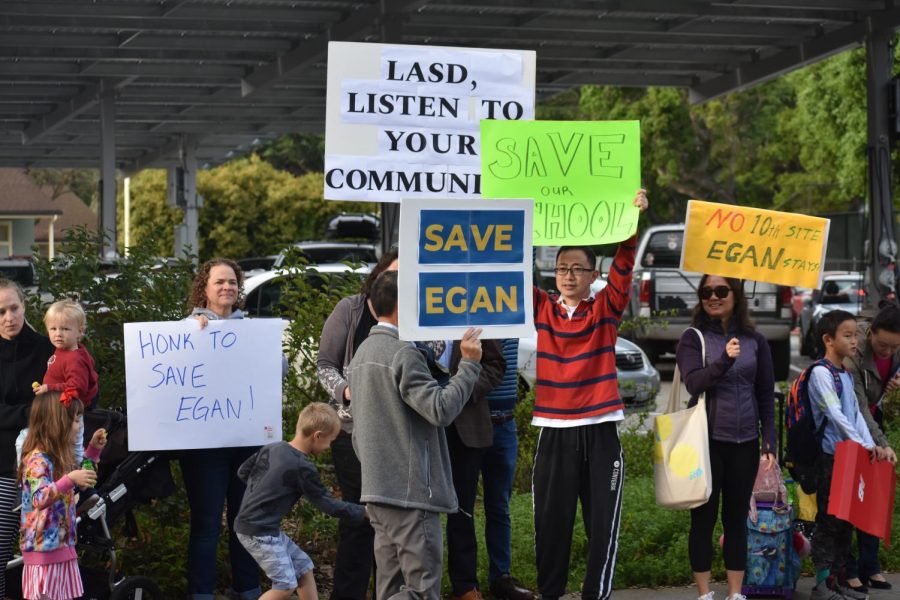 On Wednesday, April 3, the Los Altos School District (LASD) School Board released a proposal that would grant Bullis Charter School (BCS) full use of 16 acres of the 18.83 acre site of the current Egan Junior High School campus. The proposal, which would take effect as early as the 2023-2024 school year, could resolve years of conflicts between BCS and LASD, but has resulted in backlash from the Egan community.

Under the terms of the proposal, Egan would move to a not-yet-purchased 9.5 acre site north of El Camino at California Avenue and Showers Drive, where the Kohl’s department store currently sits. If the proposal is approved, BCS would remain spread across the Egan and Blach Intermediate School campuses until Egan relocates to this tenth site in 2023.

BCS and LASD have disagreed over facilities allocations since BCS was founded in 2003. Local parents founded BCS in reaction to LASD’s closure of Bullis Elementary School in Los Altos Hills, which later reopened as Gardner Bullis Elementary School in 2008. Since LASD rejected their charter in 2003, the BCS founders chartered the school through the Santa Clara County Office of Education.

Once BCS was chartered, California state Proposition 39 required LASD to provide “reasonably equivalent” space to the charter school. The year after the charter was approved, LASD offered facilities to BCS at the Egan campus in portables along San Antonio Road. In 2013, increased enrollment prompted BCS to request exclusive use of the Covington Elementary School site from LASD under Proposition 39. Instead, LASD offered BCS land on Blach’s campus, dividing BCS across two sites, as part of a five-year Facilities Use agreement.

Starting in October 2017, BCS and LASD met to discuss a long term solution to follow that agreement which expires this school year.

In the summer of 2018, however, BCS announced that its in-district enrollment would increase to 1,058 students for the 2019-2020 school year. In November 2018, BCS submitted another Proposition 39 Facilities Request to LASD, asking for exclusive use of the Egan site.

In February of 2019, LASD made a preliminary facilities offer to BCS that included more space at Egan and Blach, as well as extra space at Loyola Elementary School. However, LASD and BCS resumed negotiations instead of acting on the initial offer, arriving at the April 3 proposal that will consolidate BCS’s campus on the Egan site.

LASD Board of Trustees president Jessica Speiser called the proposed agreement “our best opportunity to ensure all students continue to thrive” in an April 3 email to the Egan community. One of the goals of the LASD School Board during these negotiations was to avoid litigation. Furthermore, each of the nine LASD schools and BCS would have its own site. LASD would retain 2.83 acres of the current Egan campus for affordable teacher housing. This ten-year agreement would also place a cap on BCS enrollment at 1,111 students, which is an increase from the current 945-student cap put in place as a part of the five-year Facilities Use agreement.

Several BCS parents spoke in favor of the proposal at a BCS meeting. They argued that this proposal is a compromise and Egan still benefits by getting a new facility. Furthermore, they stated that BCS requests have not been accepted by LASD in the past, such as their facilities request for the Covington Elementary School campus in 2013.

Junior Elena Atluri, who attended BCS, agreed. “I understand the story with Bullis taking over the Egan campus in the first place,” she said. “But Bullis is their own school and they need the space that the school district has to give them.”

Nevertheless, a change.org petition entitled “Save Egan and Our Los Altos Community” has garnered over 6,000 signatures as of publication. On Monday, April 8, some LASD parents and students staged a protest at Egan, and later that night, the community went to voice their opinions at the LASD and BCS school board meetings.

“Hearing that Egan is moving to a Kohl’s, that’s just ridiculous—that’s not a place for a school,” Egan alum junior Elena Mujica said.

The laws that govern the relationship between public school districts and charter schools may be changing soon in California. Assembly Bill 1505 would not allow the authorization of charter school petitions to be submitted directly to the State Board of Education. Local school districts would be able to approve or deny a charter for a new school, and any grievances on the part of the petitioner could be appealed to the county Office of Education. Assembly Bill 1506 also places a statewide cap on how many charter schools can operate. Both bills are currently in committee.

The BCS and LASD school boards will have a final vote on the proposal on April 29. Both boards are taking community input before making a decision. If completed, this ten-year agreement would put an end to a years-long costly, public debate over how LASD should accommodate an expanding BCS.