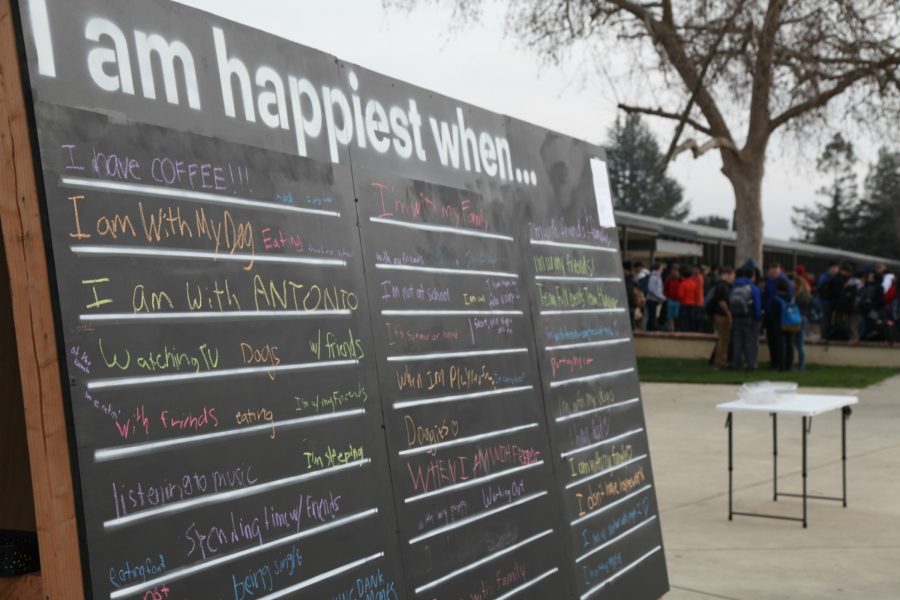 Students from Albert Lagazo’s Geometry class and Bobby Soto’s Life Skills class at Los Altos have come together to create a public art project called the “Unity Wall”, a movement that was started by Candy Chang, a Taiwanese-American artist, in her New Orleans neighborhood. The project was first displayed on January 17 during brunch in order to foster positivity and unity on the school campus.

The wall, a wooden frame covered in chalkboard paint, displays Los Altos community responses to the prompt of the month with January’s prompt being “I am happiest when…”. Soto’s students constructed the wall while Lagazo’s class designed the structure.

“Soto looked into plans for it and we met with administration twice to get approval,” Life Skills Instructional Assistant Rudy Alacasa said. “We started putting plans together in early October and actually finished on January 16.”

Lagazo and Soto formed an interdisciplinary collaboration together at the start of last year. This is both teachers’ second year at Los Altos and since the start of last year, they have worked together to brainstorm various projects for their classes. For this year’s project, Soto first pitched the idea to Lagazo after being inspired by “Before I Die,” a Ted Talk by Candy Chang. Today, there are over 2,000 walls in 70 different countries.

“Soto brainstormed the idea and showed it to me before everything started,” Lagazo said. “He told me there was a need to build the wall so we created different models. We thought of [the wall] a month after the school year started and then we started showing and brainstorming it to the classes. They saw the importance and need for the wall at the school.”

While the wall was inspired by the negative emotions surrounding the process of the presidential election, it is not intended to make a political statement. The wall is used for students to express their feelings in a free environment without judgement.

“Leading up to elections we saw the meanness and hate coming out and how people were stressing about the elections,” Alacasa said. “Soto and I thought that everybody can complain but if you’re going to do something, do something so we can all feel better. You should get involved… Do something about it.”

While the students were guided by the teachers throughout the process, the project was almost entirely student-run. Keeping in mind the Life Skills curriculum, the students learned how to properly use a saw and drill from Construction teacher Tomas Ibarra, as well as learning how to professionally present their ideas.

“The whole process was very interesting but also difficult because not many girls knew about basic construction,” Senior Yesenia Martinez-Galvan said. “It took a lot of time and effort but now I feel more comfortable [using construction materials].”

The wall will be exhibited in the quad for now but will move to different locations throughout the school year due to weather changes and for greater accessibility.

“One of the ideas that was proposed by Alvarado’s leadership class was to have it located in different parts of the campus on different days to allow different [areas] for students to interact,” Soto said. “One of the nice parts about  the wall is that you can comment publicly. Something special about commenting [anonymously] is that it allows people to be themselves and write what they want.”

A blog will be regularly updated with photos of the filled out wall by junior Zachary Thomas, a student from the Life Skills class.

“We want to take pictures of the wall and we were advised by Leadership to create a blog and keep updating it,” Alacasa said.

As the project of building the wall was a time-consuming endeavor,  the Life Skills students worked on the wall during block periods and also sacrificed their vacation time in order to complete it. The Life Skills class divided up different positions for individual students to help run the operation more smoothly.

“The teachers chose me as the project manager and throughout the project, we were able to see what job fit each person,” junior Maria Santos-Valdez said. “For budget and building, the kids already knew what to do so they wanted to stick with those jobs. People had positions because they were skilled in that area.”

The wall will display a new prompt each month, drawn from a list that was created by Legazo and Alacasa. The prompts will be relevant to what is happening during the month with students in the Life Skills class voting on them. Some of the prompts include: “Before I graduate…”, “What I love is…”, and “My truth is…”

“Life Skills will maintain the wall monthly by adding new stencils and providing students with brand new prompts to keep everybody on their toes,” Soto said. “They will continue to record the responses and analyze them.”

Students from the Life Skills class credited this project as a positive learning experience and will continue to maintain and run the wall through the remainder of the school year.

“I hope [this wall] inspires a lot more schools in the district because it’s a nice thing to do,” Maria said. “For me, when I saw that the backside of the wall was full already, it made me emotional and it was amazing to see how excited people were for it.”