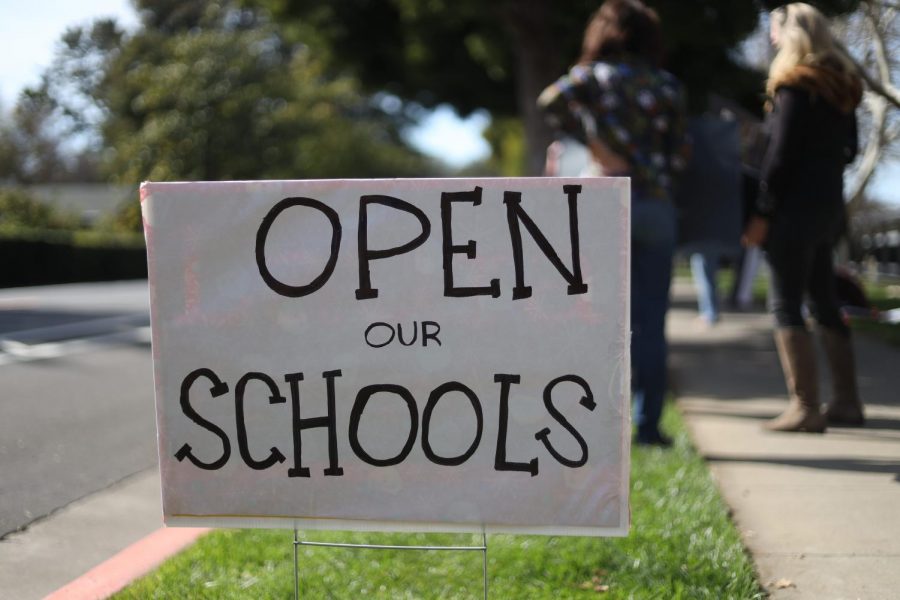 A protest usually consists of angered loud chants and bright, vibrant signs, but yesterday’s gathering regarding school reopening looked quite the opposite. After the Mountain View–Los Altos School (MVLA) District released an updated rotating hybrid model, the gathering became a celebration of "cautious optimism."

A protest usually consists of angered loud chants and bright, vibrant signs, but yesterday’s gathering regarding school reopening looked quite the opposite.

A group of parents and students were originally set to meet yesterday at Los Altos High School to advocate for a faster transition into in-person learning in response to the newly implemented stable cohort model. However, the planned protest became a celebration when the Mountain View–Los Altos School (MVLA) District released an updated rotating hybrid model that allows for more in-person student-teacher interaction that the District will implement starting Monday, April 19.

While this was a gathering of “cautious optimism,” according to organizer Laura Teksler, the goal was still to hold the District accountable for its decisions and advocate for better communication between the District, students and parents.

Many parents echoed these claims, saying that the lack of communication was “disempowering” because they had little say in a decision that would make a large impact on their lives.

“We have no visibility into it, and that’s frustrating,” Teksler said.

Along with complaints against the Board, many parents cited mental health concerns as reasons for an expedited school reopening. They openly called out school administrations for not providing adequate mental health support resources for students.

“Sitting on Zoom for such a large part of the day and then having to look at the screen even more [for homework] can be unmotivating,” senior Toby Teksler said. “I’ve built myself a routine of getting consistent exercise so I’ve been able to cope, but many of my friends are struggling.”

Parents at the celebration also advocated for a hybrid model with teachers providing instruction in the classroom rather than on Zoom, arguing that having teachers on campus is the whole premise of in-person learning. However, some parents acknowledged the concerns that teachers may have moving forward with a hybrid model.

“I make a big distinction between individual teachers and what the teachers’ union represents,” Teksler said. “I don’t think it’s right for me to imply any kind of pressure on an individual teacher. I know it’s been a very difficult year for them as well, and I understand their concerns and their hesitation.”

However, not every parent shared that same perspective.

“It makes me mad,” parent Carrol Titus said. “Look in the parking lot, there’s a lot of nice Teslas, new cars and there are no teachers. What the heck! I don’t know of any other industry where you’re allowed to not work and still get paid. It’s high time that they’re back in, or get some new teachers.”

While the message of the gathering was to bring students back to campus with an emphasis on safe COVID-19 protocols, a small group of parents believe that students shouldn’t be required to follow the mask and social distancing guidelines implemented by the California Department of Public Health (CDPH).

“I would not be in favor of students returning to campus with masks,” Titus said. “I think it’s completely ridiculous. It’s just not supported by science.”

The Board will be meeting on Monday, March 8, to further discuss the new rotating hybrid model.