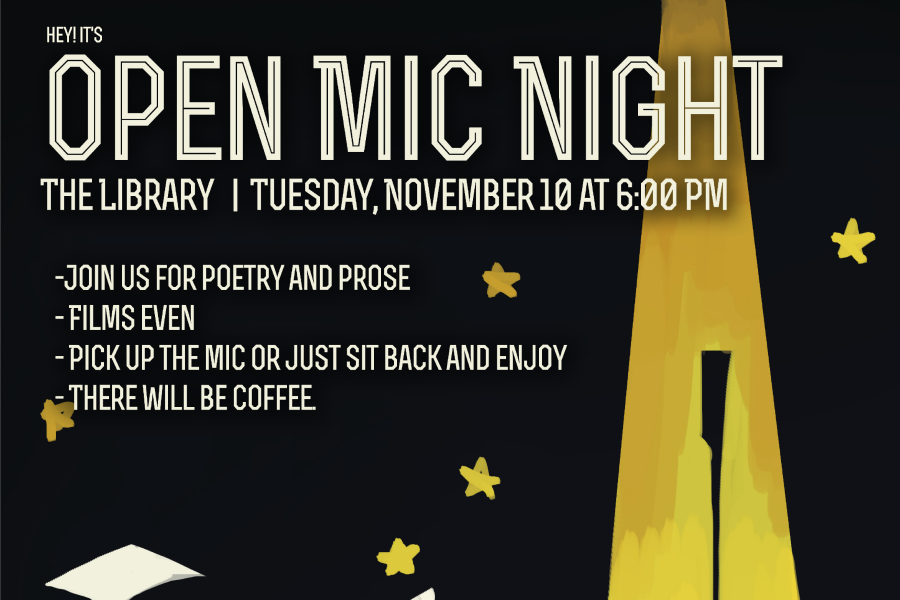 LAHS Librarian Gordon Jack will host the Open Mic Night at 6 p.m. on Tuesday, November 10. Students are invited to perform or display their art or watch the presentations at the Library that evening. Organized in a collaboration between librarian Gordon Jack and a group of art-minded LAHS students, the event is open to anyone who wants to perform; no sign-ups are required.

“Our objective is just to create an open environment in which students can share their interests and sort of just collaborate with others,” Jack said. “Originally we were talking about [how] there used to be a Lit Mag here on campus and we were talking about… ‘what happened to the Lit Mag? No one’s keeping that going,’ and then we kind of thought that maybe the Lit Mag has run its course and that the way for people to share their work is more in a live, kind of interactive way.”

One of the event’s organizers, senior Patrick Fong, stresses the idea that the Mic Night is a venue for all types of art, not just written work.

“Our hope is for a diverse range of people to be there,” Patrick said. “Anything’s cool, [including] music, even monologues if you’re in Broken Box. We just want to make it an open environment where you could even just come and listen.”

Jack hopes to create a relaxed atmosphere and a comfortable space for students to share their art. He plans on setting up a performance area next to the computer bank with a spotlight, mic and speakers for students to speak to the crowd, along with a refreshments table furnished with coffee and snacks.

“[We want to] just try to create an atmosphere that you would see in a cafe and have people go up one at a time,” Jack said. “We were thinking about setting a limit of four minutes on the mic so that no one gets up there and reads their epic poem for two hours.”

Jack and Patrick do not view the Open Mic Night merely as an extra benefit that should be extended to students; they view it as a space for creative output that could become a necessary part of the school’s culture.

“Outside of the Art Show, [at LAHS] there’s not a lot of venues for students to share their creative work with a larger audience and get feedback on it,” Jack said. “Usually that happens in a classroom, [and] maybe not even that.

Patrick noted that as a writer, the desire to write creatively and share one’s work cannot be satisfied only by regular English classes. While he conceded that the AP classes need to occupy nearly all of their time preparing students for the AP tests, he speculated that a class dedicated to creative writing may be the best way to satisfy that need.

“We don’t do a lot of creative writing in English, it’s one unit a year,” Patrick said. “And even when we do creative writing it’s a very structured environment in which you’re supposed to express yourself, but also you’re thinking about your grade and everything and it’s not a very good way to write… [the Open Mic Night] kind of gives an opportunity [to express yourself as a student.] I just think that’s kind of missing for a lot of people, me included.”