LAHS holds Seniors Under the Stars in place of traditional prom 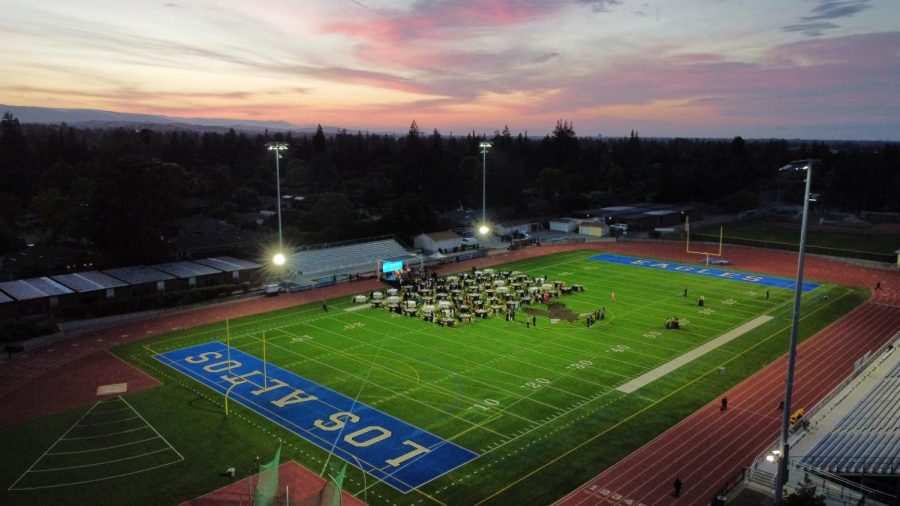 Students attend Seniors Under the Stars, held on the football field.

Seniors gathered on the Los Altos High School football field tonight for their pandemic-era prom, Seniors Under the Stars, complete with masks, social distancing and — contrary to generations of prom tradition — no dancing allowed. The event, held from 6 to 9 p.m., came after last year’s prom was canceled due to COVID-19 restrictions and consisted of dinner, live music and social activities for the seniors.

Tables at Seniors Under the Stars were spaced out to allow for physical distancing. There was also a stage set up on the track for student performances and the “Toasts & Roasts” portion of the evening, where students spoke about their peers by complimenting and roasting them. Students entered through the gate close to the student parking lot near the portables, which was decorated with an arch consisting of blue, white, yellow and gold balloons. As the sun set, the new stadium lights were used to illuminate the venue

During the event, students were provided with a backdrop to take selfies, and two more backdrops staffed by a professional photographer. Students had a catered dinner, which was prepared and served from a staging area by the track and field sand pits.

The night also consisted of several musical performances from LAHS seniors. Toward the end of the event, seniors Amanda Le and Audrey Chang were announced as the Prom Top 2, receiving the most votes out of the Prom Top 20 candidates.