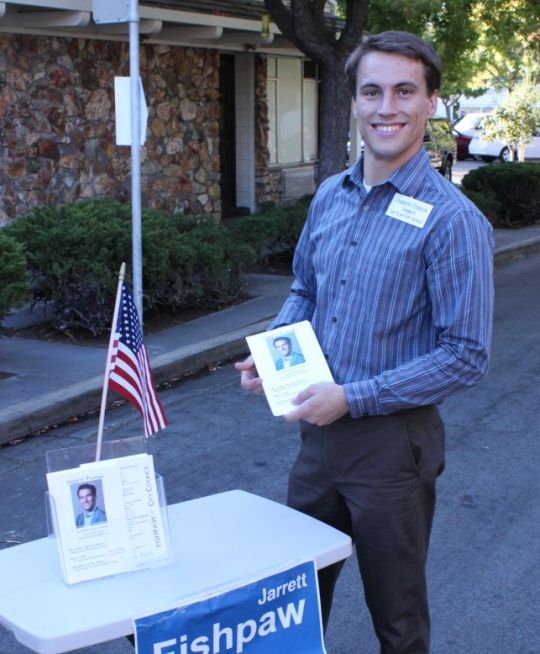 From the back of a bustling cafe, a young man clad in a blue shirt and a nametag approaches me. As he nears, an enthusiastic smile lights up his face. His nametag identifies him as Jarrett Fishpaw, a candidate in the 2011 Los Altos City Council election.

An ‘05 alumnus of LAHS and ‘09 graduate of UC Santa Cruz, Fishpaw has returned to Los Altos in hopes of bridging the gap between the elderly community of Los Altos and that of the spirited young teens also residing in his hometown.

At LAHS, Fishpaw was a member of Mainstreet Singers, marched bass drum, played water polo and served as captain of the diving and wrestling teams.

“I think I learned as much from sports in high school as I did from academics,” Fishpaw said. “I needed a lot of determination to maintain schoolwork and sports.”

Fishpaw looks back most fondly on his economics class with Robert Freeman, which shaped his career choices.

“He was a very good teacher in my mind, very motivational,” Fishpaw said. “I chose to pursue economics because of my high school economics course.”

The art of diligence and dedication has carried over to his political aspirations, as Fishpaw campaigns door-to-door. Because he is young, he feels it is important to validate his candidacy by making himself known around town.

“I knock on about 200 doors a day, and at times, I just want to go home and get a cup of coffee, but I know I just have to keep going,” Fishpaw said. “A little bit every day is such a powerful thing—you can move mountains by moving pebbles.”

Fishpaw has embraced this mindset and applied it to all aspects of his campaign. To run an efficient, low-cost campaign, he has printed his own brochures, hired a few of his friends to design and maintain his web page, and asked for volunteers as a part of his campaign staff. This helps him “compete on a professional campaign level.”

While Fishpaw could not save money on professional-grade lawn signs, they are well worth the cost to him.

“I had to get my lawn signs printed,” Fishpaw said. “That was kind of exciting. My lawn signs will be on the same lawns as some of Meg Whitman’s and Jerry Brown’s signs.”
Prior to running for office, Fishpaw had been involved with the city for several years. He worked for the Village Association, organized events and participated in City Council meetings.

“One thing that I really respect is [City Council’s] ability to address the particular issue at hand and separate the broad emotions … from what’s actually happening,” Fishpaw said.

Although people may underestimate him because of his age, Fishpaw believes his youth enables him to represent the younger generations of Los Altos.

“Age discrimination happens a lot,” Fishpaw said. “Many people think 20 is too young and 80 is too old, but there is no sweet spot in the middle. The only way to get experience is to get involved.”

Fishpaw is not one to mask his youth by professing omniscience. Although he has a comprehensive understanding of the city and its workings, he admits when he doesn’t have an immediate answer to tougher questions.

“I don’t want to overstate myself,” Fishpaw said. “Sometimes my answer is ‘I don’t know, I’ll have to look into it.’”

Fishpaw said it’s never too early for high school students to get involved. Even if they are underage and therefore unable to vote, he encourages them to become active in their communities, as a “wicked intelligence and a lot of energy” makes for a powerful student body.