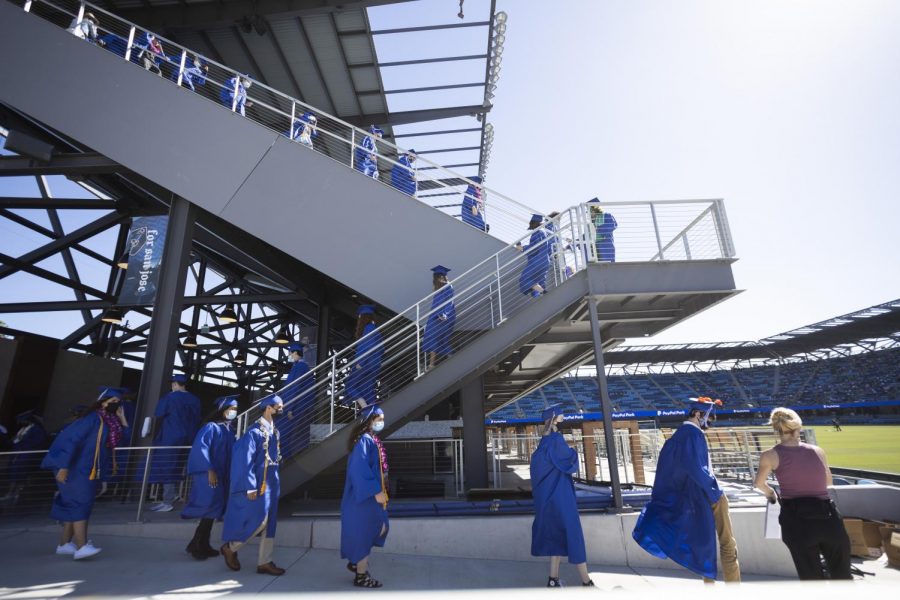 Graduating seniors preparing to walk across the podium.

Los Altos High School graduates celebrated the end of their high school years at a commencement ceremony organized by the Mountain View–Los Altos District in PayPal Park in San Jose today. The venue allowed participants and guests to social distance per district guidelines.

The event kicked off with a joint performance by the LAHS orchestra and band, directed by music teacher Ted Ferrucci. It was recorded virtually and played on the stadium loudspeakers. Graduates Jessica Dooley and Evan Fine welcomed the crowd as the masters of ceremony, followed by the Pledge of Allegiance recited by graduate Arsh Merchant.

“Although we are not all at 201 Almond Avenue on Tom Bert Field, we are here together and that is something to truly celebrate,” Principal Wynne Satterwhite said.

“When I think of our class, I think of a class that defies expectations,” Amanda said. “We’ve experienced high school in an unconventional way, and tackled our challenges head on. We’ve battled wildfires, unjust immagration policies, gun violence, climate change and systemic racism. And through it all, we showed the world that the class of 2021 does not sit on the sidelines.

Graduates from the LAHS choir also performed two songs along with a virtual recording with other choir members.

The event then transitioned into the awards portion where selected students were named to receive two different awards. The New ERA award was awarded to 18 students who were deemed people who, “empower, respect and achieve,” hence the acronym. The Eagle Awards were given to Jessica Dooley, Audrey Chang, Ben Falkenburg and Margaret Capetz for “outstanding leadership, scholarship and citizenship throughout the community of Los Altos High School.”