Lady Eagles Come Back to Beat Mountain View in Overtime 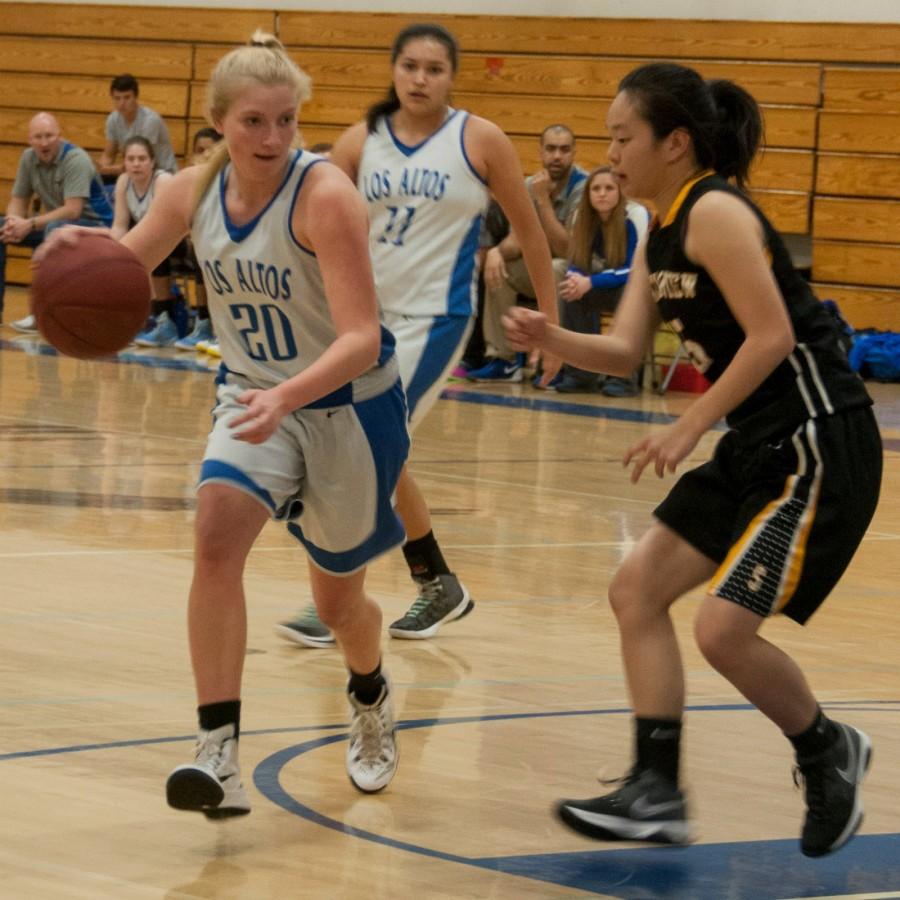 Senior Rachel Glein makes a drive toward the basket. Photo by Meilin Tsao.

In their first home league game of the season, the varsity girls basketball team beat cross-town rivals Mountain View High School in an overtime thriller with a final score of 50-47. Now, the Lady Eagles have an overall record of 10-4.

Coming from a disappointing loss in their first league game against Saratoga, Los Altos entered the game full of fire and intensity. The first quarter was a back-and-forth fight, with the teams exchanging fouls and offensive attempts from both sides of the court. Junior Alyssa Cortinas hit an early three-pointer to give Los Altos their first lead, but the Spartans remained on top at the end of the quarter, leading 10-9.

The Spartans scored early in the second quarter, but Los Altos came right back with a quick bucket from freshman Mahika Gupta. With five minutes left in the quarter, Alyssa scored her third three-pointer tying the game for the first time at 14-14, and soon after, junior Audrey Jones gave Los Altos a 16-14 lead with a layup. However, Mountain View came back to retake the lead in the final few minutes, and despite multiple blocks by senior Meg Enthoven, the Eagles went into halftime down 20-18.

Mountain View stretched its lead in the early stages of the third quarter as multiple Los Altos turnovers gave the Spartans easy layups. Despite a 6-2 Spartan run to open the quarter, the Eagles’ defense, led by Meg, held on, and by the end of the period, Los Altos had begun to claw its way back, narrowing the deficit to four at 31-27 at the end of the third quarter.

The two teams went back and forth in the fourth quarter, bringing the game to its exciting climax.  Down by 39-34 with under 25 seconds remaining, Alyssa drove to the basket for a layup to cut the Mountain View lead to just three. On the following possession, Mountain View missed two free throws that would have sealed the game, and Los Altos called a time-out with 11.6 seconds remaining in the quarter to draw up one final play.

Everyone in the gym — player, coach or fan — expected the ball to go to Alyssa, who had already hit four three-pointers and was leading the team with 21 points. However, when she caught the ball she found herself double-teamed, so she passed up the shot threw it to senior Allegra Maeso, who converted the game-tying basket as time expired.

“[Coach Jaclyn Brode] told us to run a play for Alyssa… but she wasn’t open,” Allegra said. “I could not see the time, but I knew that we needed a three so I silenced everything [out] and focused on my mechanics to shoot, and it went in so we are pretty lucky, but it was definitely a group effort. It was awesome.”

In overtime, Los Altos made 6 consecutive free throws between Meg and Alyssa to take the lead at 46-39. Mountain View attempted to fight back, but more free throws from Allegra and Audrey sealed the Eagles’ 50-47 victory.

“Allegra hitting that three pumped us up more than I’ve ever seen us get pumped up before,” Meg said. ”It fueled the entire team and brought us up into a whole new level of intensity. Everyone did an amazing job the entire team, the bench, the people on the court, the fans, everyone contributed to this win and I am so thankful that it happened.”