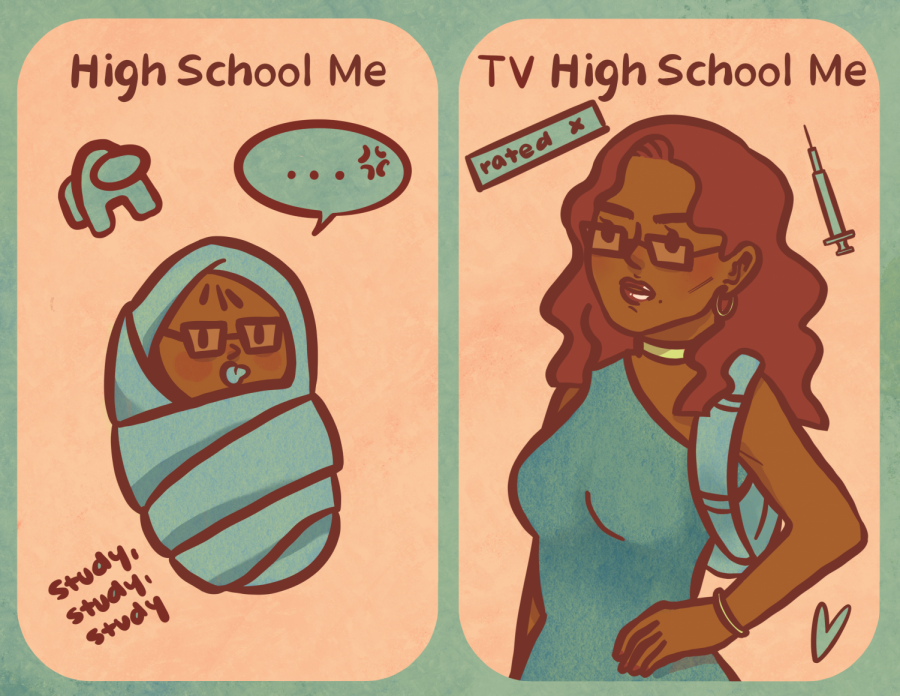 Copy Editor Kaavya Butaney writes about how the media portrays teens as mature adults — far from the reality of what high school looks like.

I want to believe that I’m mature and rational, but I’m only 16 years old. I’m scared of trigonometric identities, I play “Among Us” a little too much and I get angry when my teachers use ellipses in their emails. Most 16-year-olds I know are like that. We’re all pretty confused, a little lackadaisical and extremely immature.

But people my age are portrayed on TV as adults involved in drug scandals and murders. Baby-faced, 16-year-old me would be turned into some gorgeous 22-year-old who never does homework and somehow runs a speakeasy. It’s easy to put a 16-year-old in those weird or sexual situations when they look like they belong in college, but if it were an actual 16-year-old, it would make many uncomfortable.

Let’s take “Riverdale,” for example: The only reminder that the characters are teenagers is when they’re shoved into the lockers of their high school. Outside of this rare scenario, the vast majority of their lives seem to involve an aggressive amount of partying, shady business deals and mystery solving. Most people I know spend their time hanging out with friends, doing homework or watching TikTok, not pretending to be buried for the sake of avoiding death.

Let’s be real, no high school is full of gorgeous, 25-year-old-looking people. So why? Illegal activities: It’s literally illegal for underage actors to be in sex scenes and because of that, they hire older actors. Something about that is incredibly wrong.

So yeah, I’m talking about sexualization. I don’t care what the teenagers are doing — 30-and 40-year-old TV producers should not be portraying teenagers the way they do. An adult is thinking about two “teenagers” having sex. That’s straight up creepy, not to mention slightly pedophilic.

Among those who are high school age, only 40 percent have had sex, but according to these shows, at least 90 percent of students are somehow having sex all the time. Like, literally, all the time.

Legally speaking, these shows can’t show two 15-years-olds having sex but when those actors are 26, it’s suddenly okay. That is simply wrong. Laws exist for a reason and by using adult actors, these producers just gently skirt child pornography laws and maintain unnecessarily intimate scenes.

I just can’t come up with a reason why shows have to characterize high schoolers as so inherently sexual. That’s just not what I know. My high school experience is studying, studying and studying, but it’s also having great friends, drinking too much coffee and watching “Star Wars” with my brother at 1 a.m.

Why isn’t that side of high school shown? Sure, it’s not as dramatic, but personally, I’d prefer a funny and more realistic depiction of high school rather than another soap opera characterization that I simply cannot relate to. I’m not advocating for the end of dramatic teen shows because I know people love those too but maybe just a couple less of those and a couple more realistic ones.

Movies like “Edge of Seventeen,” which while isn’t super true-to-life, isn’t overly dramatic either. It’s funny and dark and a little over-the-top but at least the main character feels like a high schooler.

Accuracy and boredom don’t go hand-in-hand. Fiction is just fiction but at the very least, they should have homework and look at oldest, 19. And less sex scenes, please. I’m not saying taking out every slightly moment of melodrama or sex joke, but I think that high school can be shown in a more realistic, entertaining way if there is an actual effort made. So on the off chance that some TV studio is reading this, hit me up. I have some ideas.