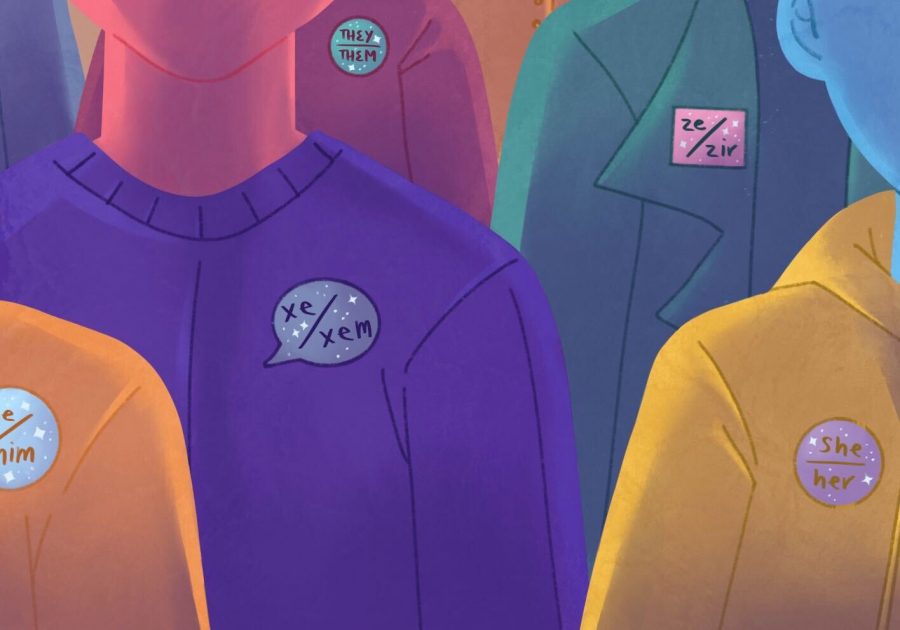 People use a variety of pronouns that all deserve to be respected.

To be perfectly honest, I thought pronouns were the simplest part of learning English grammar. Why focus on when to use she or he when I can be worried by my semicolon usage? But, of course, I was wrong. Somehow, through a combination of misinformation and bigotry, pronouns have become the most controversial part of grammar.

Pronouns are pretty simple and easy to follow. They fall into two important categories: traditional pronouns (he, she and they) and neopronouns (xe, ze, ne and many more). Neopronouns are singular, gender-neutral, third-person pronouns not officially recognized by the English language. They work the exact same way as traditional pronouns. If I used xe/xir, you would say “Xe is the columnist for The Talon and xir columns are the best thing I’ve ever read.”

Gender-neutral pronouns have faced a variety of controversy. They/them has been called grammatically incorrect (false), neopronouns have been said to be “detracting from the trans movement” (also false). People think that neopronouns are confusing and use them as an excuse to dismiss the movement for trans rights, allowing them to dismiss trans people’s pronouns in general.

It’s really not complicated. C’mon. There’s no reason to disrespect pronouns, regardless of if it is they or xe or she.

But transphobia always finds a way. Transphobia, which is dislike or prejudice against trans people, often leads people to purposefully use the wrong pronouns. Yes, people sometimes accidentally use the wrong pronoun, but that’s fixed as easily as saying “sorry, I meant she.” That’s not always true, though. Some people will aggressively use “he” to refer to a trans woman, trying to say that they’re not a “real” woman. They try to argue that being transgender isn’t real and that people choose to be trans.

To clarify, being trans is not a choice. Gender is the way people perceive themselves. People don’t choose to be trans just so they can get some of that spicy discrimination and a far more difficult life; their gender legitimately does not match what was assigned at birth. Simple as that. Science backs it up, showing that there is a legitimate disconnect in the brain.

Transphobes really hate using pronouns properly. When singer Sam Smith came out as nonbinary and said they preferred they/them pronouns, headlines referred to Smith as “he,” even in articles explicitly about their coming out. That was in 2019, two years ago, from reputable publications like BBC and Associated Press. It worries me that well-informed journalists can’t get their act together for someone as public as Sam Smith. What about normal people, the trans people on the street who face these things daily?

I’m coming to the conclusion you expected: It’s a societal issue. People can make all the excuses they want about grammar but the truth is that it is about respect. If you respect someone, you can respect their pronouns, regardless of grammar. And honestly? I don’t really care if it’s grammatically correct or not so long as it helps someone out.

The English language is versatile and capable of expanding and changing, so what does it matter if it’s not in Merriam-Webster yet? More importantly, if grammar is the thing stopping you from respecting pronouns, I’m sorry to tell you that momentum is not on your side. Anyone who knows anything about English will tell you they/them is correct and academics have already started analyzing neopronouns and validating them.

Look, I don’t care whether you want to whine about gender or sex. I care that people know they are valid. So forget your complaining. Respect people’s pronouns.