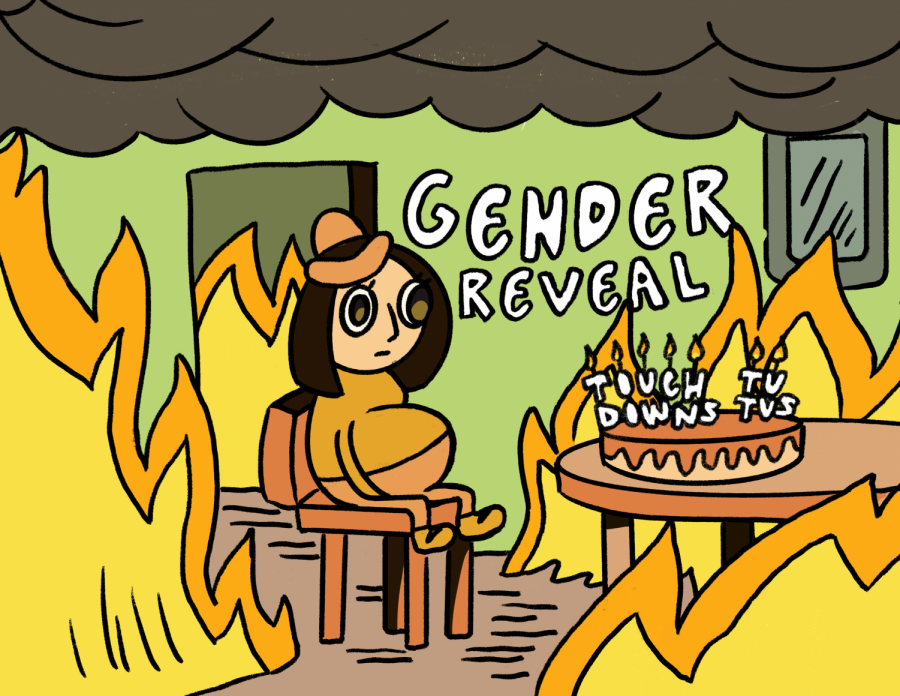 A colorful firework burns bright blue at a gender reveal and everything goes wrong from there. One silly mistake leads to a massive, massive fire. The first time I heard about the El Dorado catastrophe, I didn’t really understand why it was such a big deal. But the absurdity slowly began to occur to me: A paltry party started a fire that literally killed someone and burned down thousands of acres all because “it’s a boy!”

Gender reveal forest fires are the exact type of confusing issue I’d expect from September 2020. They’re a little weird and have a lot of problems, not to mention how they’re based on an insane amount of privilege.

First off, they shouldn’t even be called “gender” reveal parties because gender can’t be known at birth. Gender is realized by the person, not dictated by their body or their appearance. When we are referring to the physical characteristics of a person, or what is known during pregnancy, we are referring to sex, essentially the categories that living things are divided into on basis of their organs. And honestly, it’s stupid to decide gender at birth. No matter the organs of the unborn child or the name you give them, they have the right to decide that for themselves.

Then there’s the issue of sex reveal cakes — a common way to reveal sex, these often cut through to reveal either blue or pink. Overall, I don’t have much of an issue with these, but the sayings written on the cakes are sometimes offensive, with gems like “touchdowns or tutus?” and “cupcake or stud muffin?” They just reinforce these gross stereotypes of what little boys and girls should be, as if I’m a cupcake just because I’m a girl and my younger brother is a stud muffin (trust me, he’s not).

Beyond that, though, these parties are just weird. To me, there’s no real purpose in such grandiose gestures. I’m not saying that you shouldn’t have a celebration, but do they have to be so large? Why does the woman walking her dog four miles away need to know that it’s a girl?

Okay, I get that your child is exciting. This might be the only indication you get of what the kid might look like when they are born, which is pretty amazing; nine months of waiting has to be exciting. But in my opinion, it still doesn’t warrant the extravagant fireworks of late.

If we forget the fireworks, even the cake is such a luxury, though. An interesting dichotomy was recently presented to me: Gender reveal parties are something so important for Americans but to many others, it’s incredibly trivial. It’s just an indicator of what the child may be like when they are born. But in countries like India, families are prohibited from knowing the sex of their child because in many cases, female babies are aborted or murdered, or the pregnant woman is abused. Women aren’t seen as valuable or worthy, just financial drags on their families.

In countries where femicide is a massive issue, if the baby is a girl, that baby could die. It is a matter of life and death. I’ve heard horror stories of what happens to baby girls and what happens to teenage girls and what happens to women. I never expected sex reveal to be a matter of life and death here in California, a place I considered safe from those pressures. Ironically, it wasn’t about the sex of the baby at all but the egotistical belief that you can endanger the people around you to declare that a baby is a boy.

Incredible job, you burned down thousands of acres and killed a blameless firefighter!

Maybe I’m being a bit harsh. After all, knowing the sex of a baby is a luxury. It’s a good thing that the baby’s sex won’t mean a lifetime of abuse. Maybe, in my mind, I should see it as a way to celebrate that.

Doesn’t mean you get fireworks. A cake, at best, and that cake better be plain. Pink or blue is the most I’ll accept. If I see a cake with something as stupid as “touchdowns or tutus” I may punt it into the Los Altos football field.