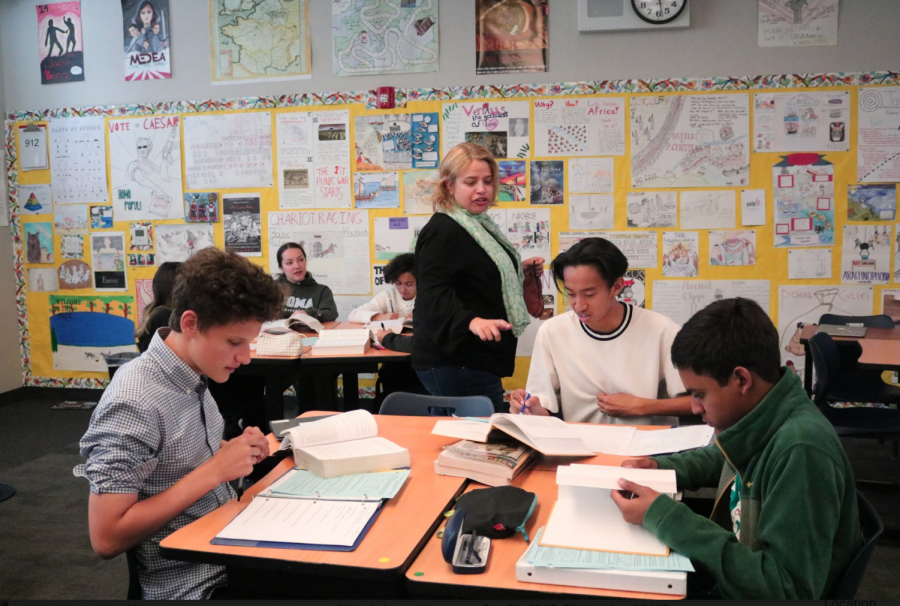 Latin is a dead language, some might say. They’re not technically wrong—it’s conversationally dead. You’d be hard pressed to find a place where you could order a pizza or hail a cab in Latin. So fine, maybe they’re right. If the essence of a language is solely dependent on its conversational speak, Latin has long been dead as a doorknob.

Krista Greksouk’s Latin class, however, is very much alive. Decorated with student artwork and filled with the productive chatter of students even during lunch, room 912 stands a space for collaboration and positive engagement. By placing an emphasis on community, Greksouk hopes to engage her students with the difficult task of learning a foreign language, spoken or not.

“When learning a foreign language, you have to take risks and be wrong a lot,” she said. “It’s important for people to feel safe with their classmates to make those mistakes because if you’re not willing to make mistakes, you’re never actually going to learn anything.”

The emphasis on community isn’t just a vehicle to teach content; Greksouk cares about her students.

“Ms. Greksouk is more friend-like than other teachers if that makes sense,” sophomore Brian Derryberry said. “She gives off a very positive attitude.”

“It’s really important to me that my students have a place on campus where they feel like they belong,” Greksouk said.

As a cheerleader in high school, Greksouk found just that: a sense of belonging. Now, as a teacher herself, she hopes to replicate that experience for her own students.

“My cheer advisor really built a strong community for us,” she said. “We would hang out, eat lunch and keep our books in her classroom all the time. I really remember what it was like to be in high school. I want to do my best to make [school] better for my students.”

Greksouk cites a number of things that help build community in her Latin classes, one of which is the small size. Unlike Los Altos’s larger language programs, the Latin program has only one teacher: Greksouk. With only four course levels spread over five periods, many Latin students will be in class together for all four years.

“It’s nice to be able to come back and not worry about getting to know a new teacher,” senior Aris Merchant said. “It’s also nice to be with the same classmates all four years.”

Additionally, because she’s a one person department, Greksouk can implement new ideas into her lessons with ease. Sometimes, these ideas come from students.

During the phalanx versus maniple project, for example, students create cardboard weapons and stage a mock battle on the back field, imitating ancient Roman battlefield tactics taught in the course’s history section.

“I had a kid tell me he joined Latin because he saw us out on the back field during the phalanx versus maniple project,” she said. “The projects are definitely a big part of building community. They give students a chance to be creative and have fun.”

But Latin class certainly isn’t all fun and games. Many real-world skills are taught that aren’t necessarily specific to Latin. According to Greksouk, one of the biggest takeaways when studying Latin is being able to problem solve. When translating sentences with complex grammatical syntax, logical thinking is a valued skill.

“Latin as a subject helps teach problem solving,” former student of Greksouk Kylie Huch said. “It’s not enough to simply memorize the rules of the syntax, you need to understand how and when to apply them.”

According to Huch—now a junior at the University of Santa Barbara, California—those same problem solving skills taught in Latin apply to her post-high school studies of computer science and biochemistry.

“Understanding how to approach problems is a universal skill,” she said. “[The skills] I acquired in Latin definitely translated over.”

Through all of her community-building efforts, Greksouk teaches with a self-aware understanding.

“I know that not all my students are going to be Latin scholars,” she said. “I know that they may remember as much Latin as I do Spanish from high school. But I hope that they feel like belong somewhere.”

“[Latin class] has been almost like a home at school for me,” said Aris. “It’s nice to come back and know that I’m working with the same team.”

As for Greksouk herself, students can expect to see her in the classroom far into the foreseeable future.

“[When I was young], I was worried that I wouldn’t be able to find a stable career or that I’d be unhappy with my job,” she said. “When I got tenure I was so stoked. It feels really good knowing that I have this job, and I still love it.”

So next time you’re out on the back field, stop and take a look—you may just see a raging cardboard battle.