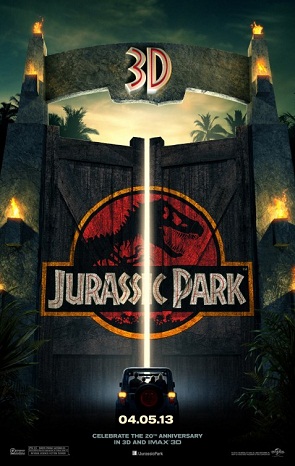 If when you think of “Jurassic Park 3D,” you see horrifying 3D velociraptor attacks, you might be disappointed by the re-release of Steven Spielberg’s dinosaur blockbuster. “Jurassic Park” originally came out in 1993, winning three technical Academy Awards and becoming a pop culture phenomenon. The original movie mixed comedy, adventure, visual effects and science fiction, but the 20th anniversary re-release literally adds another dimension. Spielberg’s classic will be released on April 5, 2013 in 3D in an attempt to recreate his groundbreaking film for the next generation of viewers. While the film is still a captivating blockbuster two decades later, the addition of 3D falls unexpectedly flat.

The movie follows the story of eccentric and wealthy John Hammond, who has created a nature preserve on a tropical island with the hopes of starting a theme park. The main attraction? Dinosaurs – back from extinction. Hammond invites two scientists, a mathematician and his grandchildren to see his work, but when a rogue employee tries to steal dinosaur embryos and shuts off the electricity in the process, it all goes wrong. The power is out, the phones aren’t working, the dinosaurs are out of their enclosures and it’s every man, woman and kid for themselves.

Twenty years later, it’s still clear why “Jurassic Park” was a hit. A loveable paleontologist couple, an uptight lawyer, a rotund and bumbling computer-network engineer Dennis Nedry and a “rock-star chaotician” make up a fun cast of characters. When the dinosaurs escape, the various ways in which characters react add to the interesting story. The lawyer hides in a toilet upon the arrival of the thundering T-rex, the grandchildren scream, Dr. Grant (the male paleontologist) is a hero and the “rock-star” finds himself incapacitated by a dinosaur bite for most of the film.

The plot is strong, with side stories making the movie less chase-heavy: Will Dr. Grant be won over by the children? Will Nedry make it to the boat? The movie begins by introducing you to the characters and dinosaurs, and as the group tours the park and the staff ticks off dozens of glitches in the automation, the suspense begins to build. It seems inevitable that something will go wrong: dinosaurs don’t make an appearance, the power turns off and the whole park is more than a bit suspicious. Adding to the drama, the most terrifying and impressive creatures don’t make an appearance until the most suspenseful moments.

For being two decades old, the special effects don’t show their age; it’s clear why the film won an Oscar for Best Visual Effects. The dinosaurs move naturally (as far as we know…) and while you wouldn’t mistake the movie for last summer’s blockbuster, the special effects hold their own. The T-rex and velociraptors are convincingly terrifying and the brachiosauruses are charming, though they look slightly clunky in slower scenes.The kids’ amazement at touchscreens and self-driving cars dates the movie much more than the animation.

Still, for its age, “Jurassic Park” delivers a fantastic visual transport back to the age of dinosaurs. Even without the 3D, the movie is a clear hit. But like the park’s scientists, the re-release embraces new technology. And like the park, this inclusion does not turn out as expected. The movie is convincing enough in two dimensions, and while the addition of a third doesn’t hurt the movie, it doesn’t do it many favors.

Because “Jurassic Park” was originally filmed in 2D, it doesn’t employ the standard tactic of objects coming out of the screen at every possible opportunity. In a way, this means that in 3D the movie seems more natural than others, but it also doesn’t seem to make the most of the extra dimension. There are only one or two times when a dinosaur lunges at you through the screen, which was something I was expecting more of. Action scenes take place largely in a way that doesn’t cater to the 3D effect, so while they are suspenseful and terrifying, they are no more intense than with one less dimension. Throughout the movie, the third dimension mainly shows off the studio’s ability to separate the foreground from the background and make the viewer slightly dizzy. Though the 3D is done well throughout the movie, it isn’t enough to help an already fantastic movie.

“Jurassic Park” is a classic. Exhilarating and often terrifying, it grabs you in its jaws until the closing credits. But it doesn’t improve much with the addition of 3D, so see it for the nostalgia, not to satisfy your craving for three-dimensional dinosaur attacks.