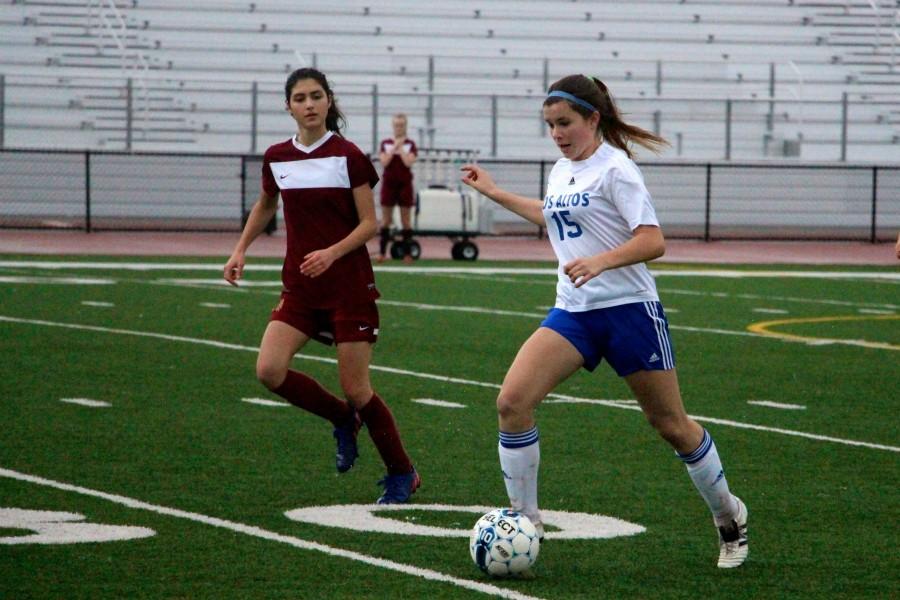 The Eagles spent the first twenty-five minutes fighting for the ball in the midfield and taking it into Cupertino’s half. They quickly found out that, thanks to rain, controlling the ball in the air and at high speeds would be difficult — especially on turf.

“We have practiced in wet conditions,” JV coach Abby Bachanas said. “Sometimes we will get the balls wet so we know how they bounce. Playing on turf, however, is something that we’re not used to… so that was definitely a challenge.”

Once both teams adjusted, the match slowed down and shifted towards a steady passing game through the midfield. In the 17th minute, Nika Darvish hit off the cross and got the top corner of the crossbar, setting off a string of near attempts by Los Altos that saw them picking apart Cupertino’s defense to get shots inside the 18-yard line. The 21st and 24th minutes again saw near misses, but Cupertino began to take the ball more securely into the midfield and deep into the Los Altos half. Perhaps due to fear of losing the ball under wet conditions and without support, the Cupertino side generally refused to pass around their back line, cramping their passing game and making quick conversions more difficult. They managed to work their way up the middlefield with formidable footwork, but they consistently lost the ball both thanks to through balls that skipped too quickly for their mark and to solid work from Los Altos’s center-backs. Neither side made much more progress into the other team’s half before the first half concluded.

Both the Eagles and the Pioneers returned to the second half with determination to slow down the game and create a steady passing game. Los Altos saw the most success with drives down the flank by Thea Mollerstedt as well as cooperation on both sides between the fullbacks and wingers to take the ball to the corner for a cross. The Eagles repeatedly faked out Cupertino’s midfielders to take the ball up, but they got few shots or extended passing games in. It was only in the 65th minute when Los Altos’s side began to take the ball to the corners for a series of crosses. Careful maneuvering in the back in the 75th minute bought precious space for the Eagles to pass across the midfield and send a cross for a narrowly missed three-on-two. Saratoga managed to return with shots in the 77th and 82nd minutes, but neither side was able to muster a goal before the final whistle blew.

“I thought we played pretty well,” Bachanas said. “More our style with pass-and-move and finding feet and playing the way you face… I would say we dominated most of the play even though the score was tied.”