John Steinbeck: On the Verge of Extinction 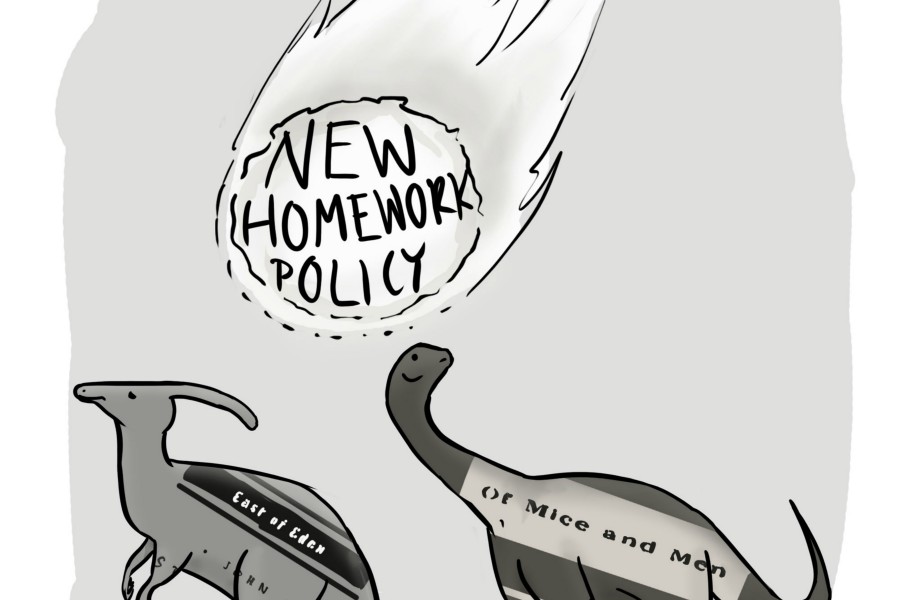 By Claire Bai and Rachel Lu

George and Lennie. Crooks, Curly and Candy. These are all characters with whom we have traveled in the adventure “Of Mice and Men” our freshman year, but who won’t be passed on to the next generation. This year, the English department has pulled the text from the ninth grade Survey of Composition and Literature English curriculum to slow down the pace of the class. Instead, students spent the unit exploring the narrative format by itself, as a trial. With the department’s simultaneous removal of “East of Eden” from American Literature and possibly from the AP English Language and Composition class, students may never be exposed to Steinbeck’s works throughout their high school career.
But for the department to do so would be a huge mistake; “East of Eden” provides the basis for the beginning of the AP English Language curriculum, and its many nuanced complexities make it an ideal initial introduction to the AP-esque discussions students in the class partake in throughout the year.

The department’s elimination of Steinbeck from the English curricula was not a conspiracy. For the past three years, the Survey team had been discussing the potential removal of a major text to create more time for other units. This past summer, the teachers finally decided to initiate the change, but unfortunately, Steinbeck’s work was the chosen candidate.
On the other hand, the biblical epic “East of Eden” left American Literature students in the dust trying to catch up with the copious 600 pages over a span of eight weeks. However, teachers and students alike were reluctant to let it go, and everyone should share the same sentiment. Both works have been the first books that students read in their respective English classes, and therefore prepare students in mindset for the tone and pace of the forthcoming course.

“With ‘East of Eden,’ it’s so long and some kids just look at the sheer volume, and they’re like ‘No way,’ and they’re just scared and they don’t even want to try, or they fall behind… so some kids just felt like they couldn’t dig themselves out of that hole,” American Literature teacher Arantxa Arriada said. “So we agreed this year to take it out of the curriculum, but I’m really scared that once you take something out it’s gone. I didn’t want to take it out, but when you’re part of a team and you’re aligned, sometimes you have to compromise. You don’t get everything you want.”

When the newly proposed homework policy is implemented, summer homework would be eliminated from all honors and AP classes, which could mean the removal of “East of Eden” in the AP English Language and Composition course as it was assigned for summer reading in past years.

“Discussing [‘East of Eden’] as a class when we came back from break was one of the most memorable times in English class, and that’s what really got me started [in] liking [the class] and the people and in general, learning from people’s ideas,” AP English Language student junior Margo Lusinchi said. “I think taking out that component [means] being thrown into the class without any prior idea of what was going on, and I think that was very helpful.”

In addition, students who partake in AP classes should realize that they are committing to a college-level and styled course, which automatically means acceleration and a heavier workload. Therefore, there should not be dissent toward the concept of summer homework.

“I feel a little bit like a hypocrite because in general, I agree with the idea that kids should have summers and that we shouldn’t be giving summer work, and that it’s in kids’ best interest to not have a bunch of stuff to do over the summer,” AP English Language teacher Keren Dawson-Bowman said. “But I also feel like reading a book is a really good thing for kids to do over the summer. I think it should be fun ― you can take ‘East of Eden’ to the beach, you know?”

It is inevitable that not everyone agrees Steinbeck is a must-read. There are other great writers of the English language who make similar points about themes such as race relations in shorter, more straightforward texts, and thereby fulfill students’ and teachers’ needs. In addition, students should be exposed to a greater variety of authors because diversity within education is necessary for diverse perspectives.

“If we were going to have a conversation of race or even the migrant workers’ experience, there are modern texts that do that also, and so while I see Steinbeck as valuable, I don’t think that he is the only person we can reference in terms of those reasons,” Abel said. “I think it’s a conversation of how much do we want to keep to the canon, and how much are we okay with getting rid of our white male authors that we have always read because they were the only ones we could read, and finding new texts.”

There will not be a complete loss though, as the freshman Survey teacher team plans to put “Of Mice and Men” back on the table as a possibility for next year’s reading, and “East of Eden” is currently a listed choice in American Literature’s Lit Circles unit. But with the rise of social media and decreasing interest in classical literature, high school students do not have much exposure to the writings of authors like Steinbeck outside of the classroom. The complete removal of “East of Eden” and Steinbeck is essentially the burning of a bridge that connects students and great literature.

“‘East of Eden’ is an incredible piece of literature that I think all high schoolers should have the chance to read,” AP English Language student junior Derek Mark said. “Steinbeck’s overarching messages in this Cain and Abel based novel gave me new insights on not only literature, but to my own life as well.”

Steinbeck has long served as a pillar for English curricula not only at LAHS, but at schools all across America. Removing his major works from classrooms would prove devastating, as it would represent a loss of exposure to an American icon. Steinbeck is famous for his quote, “With all our horrors and faults, somewhere in us there is a shining.” It would be a true shame for students to lose sight of this complex portrait of hope and humanity that Steinbeck was so famously able to pinpoint.