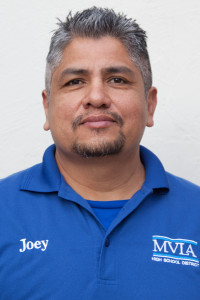 Seven months ago, the custodial staff welcomed its newest member, Joey Fuentes. Although Fuentes had only been at the school for a short time, he was immediately impressed with the students’ eagerness to care for their school, and he attributes the school’s success with its competent and equally enthusiastic teachers.

“It was wonderful working with them, they all have positive attitudes,” Fuentes said. “And that’s what’s very impressive because they’re eager to learn, eager to help.”

Prior to coming to the school, Fuentes worked as a maintenance technician in a private elementary school for a year. While he expected the school’s standards to be lower than that of the private school, Fuentes was surprised to find that the school values high custodial quality as well.

“What’s impressive about this, being a public school, is they’re doing it on their own,” Fuentes said. “Everybody’s helping each other [while] in a private school, they’re paying.”

Fuentes, born in Fresno, is the oldest of four sisters and one brother. To help his parents, Fuentes began working in the fields when he was around 13 years old. When his family moved to San Jose, Fuentes’ father started in the construction business, and Fuentes followed suit, working in construction for 23 years, first in a construction company for 20 years and then as a contractor for three years.

After the economy dropped, Fuentes worked in maintenance for six years and is now starting his job at the school, where after he plans to retire. While Fuentes works in the school during the evenings, he dedicates most of his free time to being a minister for a new church, the Living in the Rock Christian Fellowship in San Jose. Fuentes’ got exposed to being a minister for the church from a pastor he met while employed at a previous job.

“I wanted to progress more and there was no way to progress because the church [I first attended] was so big,” Fuentes said. “[The pastor from my previous job] was ordained as a minister and he was about to open his own church.”

Fuentes soon moved with his pastor to the new church, which is now three years old. Fuentes, who was ordained as a minister four months ago, attributes religion to being a big factor in helping him through tough situations.

“I’ve been through a lot in my life and spiritually, [religion] took me out of a lot of violence,”