Jiayan Luo lifts himself to nationals 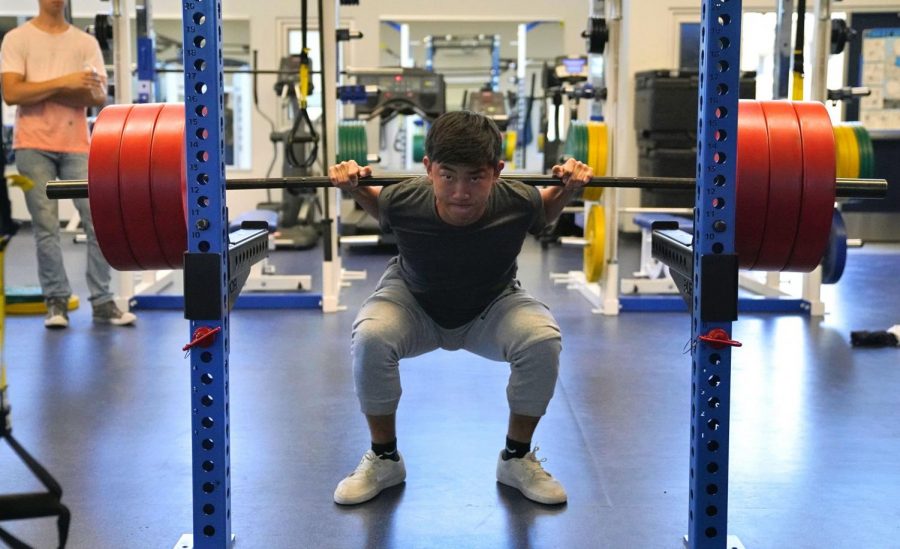 Junior Jiayan Luo does a squat, lifting a 142-kilogram (315 pound) barbell in the Fitness Center. Jiayan set his personal record of 155 kilograms (355 pounds) for the squat at nationals after qualifying for the tournament this past February.

Armed with a Reddit workout schedule and a planning spreadsheet, junior Jiayan Luo trained his way to the 2018 USA Raw Powerlifting Nationals in Spokane, Washington. The event took place from October 10 to 14 and hosted 1200 competitors. Jiayan finished in seventh place in the Male Teen II (16-17) category with a total score of 407.5 kilograms (898 pounds).

At the event, he performed three types of lifts three times: the squat, bench press and deadlift, with his total score comprising of the amount of weight he successfully lifted across the nine lifts. For each lift, he set the weight that he wanted to lift at the tabulation area. After completing the lift, he decided how much he wanted to increase the weight for each consecutive round.

“I started regulating myself,” Jiayan said. “I had to be strategic about [setting the weight], because once you lift the weight you can’t decrease it. Some people might increase the weight to beat the world record, but for me, it was more about trying to hit my goal weights.”

For each lift, Jiayan had three judges evaluating him. After taking the barbell off the rack and stabilizing himself, he needed to follow each command the judges gave him, such as “squat” or “rack” in order to get credit for the lift.

Despite feeling like a “baby bird being thrown out of the nest,” Jiayan’s third squat of 155 kilograms (341 pounds) beat his previous personal record by 10 pounds.

“That felt really good,” Jiayan said. “It hurt a little bit because I don’t lift with weight [that heavy] that often. [But the event] was really intense, because I didn’t know what to expect. There’s no one telling you what to do, so you figure it out yourself and I just followed the crowd. [The competition] was so big and no one cares about you. You’re just there for yourself.”

Attending nationals provided the necessary motivation for Jiayan’s next challenge: his qualifying meet in February.

“[Nationals gave me] newfound motivation to lift,” Jiayan said. “[When you see] some people your age that are so much better than you, they are showing you that this is possible. I’ve been pushing new weights I’ve never hit before because [of the] cool community. Everyone’s super strong and I just want to be part of it.”

Jiayan qualified for nationals through a meet this past February at Mountain View powerlifting gym Boss Barbell. At the meet, he lifted 370 kilograms (815 pounds), 15 kilograms (33 pounds) over the qualifying total of 355 kilograms (782 pounds).

But before his qualifying tournament, he researched and planned out months of workout routines and diets. He lifted five times a week, basing his workout off a routine he found on Reddit.

For the three weeks leading up to nationals, he used a program he wrote himself, where he lifted three times a week. The program increased the weight of his lifts while decreasing frequency.

Jiayan is currently cutting and bulking in preparation for the Boss of Norcal meet at Boss Barbell in February. “Cutting” refers to losing weight in the form of fat, while “bulking” refers to gaining weight in the form of muscle—two elements crucial to maintaining a lifter’s weight and health for competition. At a lower body fat percentage, Jiayan’s body will have better nutrient partitioning, or the ratio of nutrients that go to the production of protein rather than fat stores.

Ultimately, Jiayan emphasizes consistency in his diet and training leading up to nationals, tools that he believes will help other Los Altos powerlifters that are aiming to qualify.

“Don’t do anything stupid, don’t try to change anything up,” Jiayan said. “Do what you’re used to. A lot of people psych themselves up for nationals, they start doing new things, [but] if you’re not where you want to be, do the best you can at that time and at that moment.”