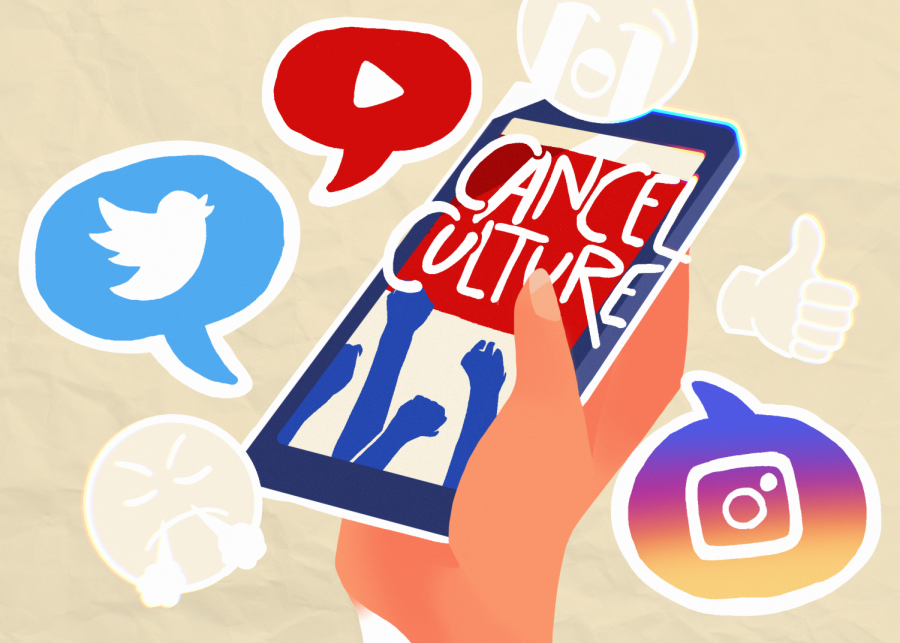 By Allan Feldman and Mira Sundar

The phrase “cancel culture” has boomed all over the world, gaining fame and followers faster than a fly can steal Mike Pence’s spotlight. But the modern cancel culture movement has really become a toxic mess, giving people an excuse for intolerance.

Beginning as an Internet term in 2015 on Twitter, cancel culture first emerged with positive intentions; it channeled empowerment because it was used to call out racist behavior and disapprove of public remarks.

Now, cancel culture has reached mainstream attention. According to Dictionary.com, cancel culture is defined as “the popular practice of withdrawing support for (canceling) public figures and companies after they have done or said something considered objectionable or offensive.”

However, this definition is far from the truth; in today’s age, bullying and mob mentality have become the crux of the movement, and political correctness has taken over. Cancel culture, once a push for accountability, has now normalized a culture of narrow-mindedness.

Freelance commentator Ayishat Akanbi sees cancel culture as the illumination of the human flaw that “it’s easier to condemn people than ideas.” Rather than allowing people to learn from their past mistakes, the public often chooses to attack figures without considering the complexities of the situation and the context behind their ideas.

When people are condemned for voicing their opinions, many argue that this threatens free speech — we won’t be covering that. Instead, we’ll examine how cancel culture has intertwined with present-day media and politics in an effort to reason why cancel culture very much needs to be canceled.

A look into social media

On social media, you will often see #canceled attached to all sorts of posts surrounding mainstream celebrities. But this movement has lately sent mixed messages and false accusations to its audience.

If someone reposts a thread about how the Confederate flag needs to be banned in the United States, and seconds later they repost something canceling an influencer for opposing this belief, ask yourself: Are they sending a message of accountability or intolerance?

In May 2019, James Charles was called out by fellow YouTube stars Jeffree Star and Tati Westbrook — a frequent collaborator and mother figure to Charles — for allegedly coercing straight men into sexual acts. He lost 2.6 million subscribers and was #canceled before he could even begin to defend himself.

We are so anxious and eager to type #canceled into our devices that we don’t consider why we’re so willing to believe baseless accusations. Charles had shown no past indications of harassment, and yet everyone was so quick to jump onto the bandwagon. There are always two sides to the story, but we seem to forget this when we are canceling someone.

One year after Westbrook had dragged Charles’s name through the mud, she posted a 40-minute long apology video recanting all allegations she previously made, which turned out to be false. She blamed her original reaction on “poisonous lies” that were fed to her by fellow YouTubers Star and Shane Dawson. The video only sparked another #canceled spree, this time directed toward Star and Dawson.

We have to wonder why society is so inclined to believe these “poisonous lies.” Why do we wholeheartedly, blindly accept that those like Charles are capable of such things without any evidence for a concrete argument? Maybe it’s just human nature. We want to be a part of the norm, and sometimes we simply fear losing friends who think differently than us.

Other celebrities like Gabbie Hanna and Taylor Swift have faced the same hostility for the wrong reasons. Cancel culture has really just become a way for others to pick out the needles from the haystack, to call out anyone who doesn’t agree with what society has believed to be “correct.”

Through this phenomenon we have manufactured a culture of sameness. People are so afraid of being different that when it comes down to making themselves heard, they shy away from the spotlight all because they’re afraid of being canceled.

A look into politics

It would be ignorant to claim that cancel culture only applies to mainstream celebrities over social media. In the past few years, cancel culture has molded itself into politics at the global scale, all the way down to the average person.

The political bubbles we situate ourselves in can dictate if society will deem our opinions “correct” or “canceled.” Living in the Bay Area, an area with a majority progressive and liberal population, those who hold more conservative views are quickly shunned.

Senior Jose Sanchez Ortiz expressed the backlash he received for coming out as a conservative in the Bay Area a few years ago.

“I’ve had a hate mob of people from our area — Mountain View, Los Altos and even beyond — post about me all over their social media for coming out as a conservative,” Jose said. “It’s almost a stigma that we’re horrible people. But in reality that’s anything further from the truth.”

Junior Alvin Xiao experienced the same intolerance for his political beliefs. During a discussion in his AP Language and Composition class, he shared that he doesn’t believe that tearing down public monuments of our Founding Fathers is necessary.

“There was a sudden lack of conversation, and I could feel the tension,” Alvin said. “It almost felt like I was being called ‘racist’ and counterintuitive. I know what I said wasn’t racist — there’s a clear line between stating the evidence and being racist.”

Jose and Alvin’s stories echo why so many people hide their political views: They fear being canceled themselves. Acts of outright racism should always be recognized and accounted for, but we can’t confuse political beliefs with racism.

This one-sided culture stems beyond local politics and into mainstream media, which is widely dominated by the left-wing. If you doubt this, hear the story of Bari Weiss, an op-ed journalist who resigned from The New York Times on Tuesday, July 14.

Commonly referred to as a conservative, Weiss often writes about support of Israel and Zionism in her columns. In an open resignation letter, she accused The Times of “unlawful discrimination, hostile work environment, and constructive discharge.” She went on to explain that “stories are chosen and told in a way to satisfy the narrowest of audiences, rather than to allow a curious public to read about the world and then draw their own conclusions.”

Just as The Times leans heavily left, so does the majority of other large national publications that pervade mainstream media. This puts the right-wing at a disadvantage, and in effect, many people are being forced out of their jobs for simply holding conservative views — just like Weiss.

As our nation’s two main parties are radicalizing, cancel culture poses an even larger threat down the road. Two separate groups are forming, consisting of liberals “versus” conservatives, and people feel they must now choose one side of the political spectrum, in fear of becoming an anomaly.

“We need to all hear one another out and stop shoving people away,” Jose said. “Not all conservatives agree with every single conservative value or what conservative politicians push from their agenda. Not to mention supporting President Donald Trump for his politics and policies doesn’t define who you are as a person.”

To be clear, extreme political beliefs shouldn’t be discouraged, but we should at least try to be more open-minded and respectful of our differences. More importantly, we should feel free to express what we truly believe in — and cancel culture isn’t the solution to this.

How do we solve this?

We, as a society, need to understand that a single action or mistake doesn’t define a person. We need to hold others responsible for their actions, but we also need to be forgiving. Why choose to cancel and publicly shun someone when we can instead have a civil conversation?

Of course, there are a few exceptions to this — people like Adolf Hitler, Joseph Stalin and Osama Bin Laden — where clearly, the evil outweighs any good. But the average person always has inherent good in them, and we can bring it out by allowing each other to grow from our mistakes.

Our end goal isn’t to banish all who are morally wrong, but to create a society where we are able to empathize with others. And we can do this by understanding that, while cancel culture may have turned into a toxic mess, it isn’t just black and white — there’s a gray area that we need to recognize.

We need to be looking at both the good and the bad as a whole. Not everyone is going to be able to agree on the scale of the good and the bad, but there is a beauty to that: If we are able to live in a society of differing opinions, where we can “agree to disagree” with each other, then maybe, just maybe, we’ll reach that gray area.