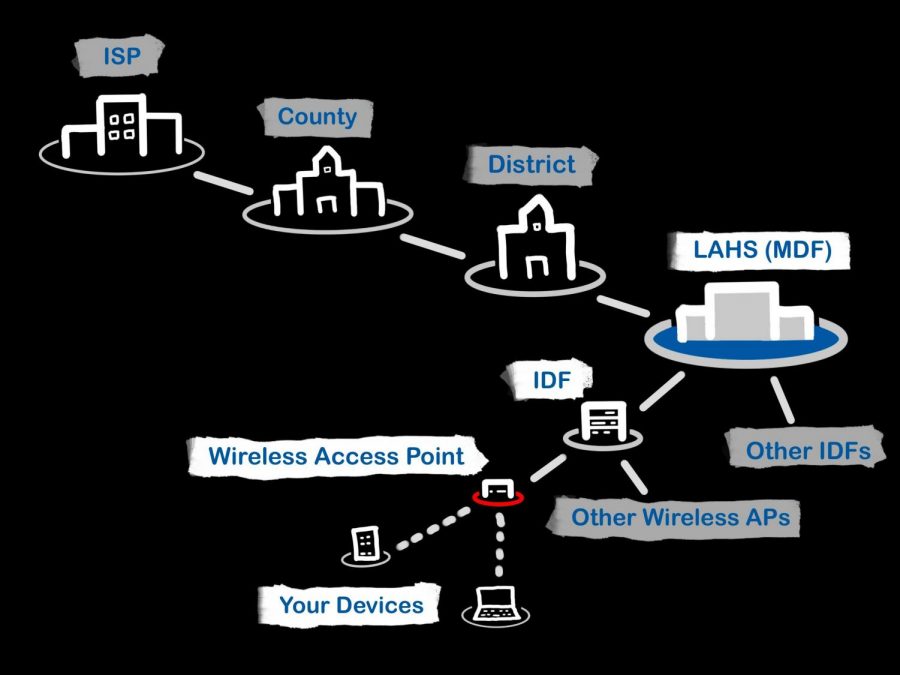 Devices connect to the internet through the pathway shown above. The district's internet issues now stem from aging wireless access points.

Note: The update is unrelated to the recent cyberattack on the MVLA School District’s internet systems.

IT Director Bob Fishtrom is working to remedy the MVLA School District’s internet issues with the installation of new equipment. He hopes to have thoroughly updated the district’s infrastructure by the end of the school year.

Fishtrom, new to the district this school year, inherited the networking issues of his predecessors. The district’s slow and unreliable internet boils down to two categories: bandwidth of the main switches in the district office as well as wireless access points.

Wireless access points are what create the school’s WiFi networks; they convert the wired connection coming from the switches to a WiFi network.

The core switches in the district office—which are themselves fed by a line from the county office—feed out to all of the MVLA sites on fiber cable lines. At any given site, the connection from the district office is then split to many access points by a smaller on-site switch called a main distribution frame (MDF).

The network pathway is like a tree, with the base being at the county office.

Fishtrom already addressed the problem of too little bandwidth in late December by installing two new and faster Cisco switches to replace a single outdated and overworked switch. According to Fishtrom, having two switches means that there’s a backup in the event that one fails. The new switches should bring about faster internet speeds once the bottleneck at the wireless access points is fixed—the other half of the problem.

“We have better throughput now, meaning the network isn’t congested,” Fishtrom said.  “However, the wireless access points have some bad configurations, and that is our next major move. After that, we are expecting reliable, secure connections with better overall speed.”

The problem now is that the wireless access points are aging out because they were configured before the rising number of student devices.

According to an IT systems administrator Keith Keller, WiFi networks are often the bottleneck.

A bottleneck will occur when there’s too much traffic for something along the ‘tree’ to handle. Essentially, if any point up the ‘tree’ is slow or outdated, it’ll hold up anything lower down.

“Often, WiFi is the bottleneck for a few reasons,” Keller said. “Wireless networks are susceptible to radio interference, so they drop data—the information that’s being sent from your device to another computer via the internet—more often than wired connections and force devices to resend some data.”

Radio interference is especially common at large sites like Los Altos, where too many devices try to access routers that are too few and poorly placed. Fishtrom and his team are working on a number of solutions to the district’s WiFi problems.

“We’ve already walked the campuses and seen the challenges,” Fishtrom said. “It’s not just a matter of having enough wireless access points, but also the placement of the points.”

Problems with placement can come with the physical barriers between routers and devices. For example, many access points at Mountain View High School are mounted on walls, which isn’t an optimal placement. Rather, they should be mounted on the ceiling, which limits the bias towards certain devices in the room. Poor placement can also cause overlapping WiFi signals which interfere with each other, like what’s present at Los Altos.

“At Los Altos, you can see the LAHS-Student, MVLA, MVLA-Faculty and MVLA-Guest networks,” said Fishtrom. “It’s best practice to only broadcast two, at most three networks.”

To fix the problem, Fishtrom plans on paring down the number of WiFi networks while also changing the experience from the student and faculty perspective.

“Each student and each faculty member will have his or her own login credentials to the network,” he said. “Student logins will mirror the login you use for your district Gmail account.  It’s important that we keep our network safe and that we know who is using it.”

“For example, if one classroom’s wireless access points go down, the system will give out an email that alerts us of that specific switch going down,” Fishtrom said.

Fishtrom hopes to complete a reconfiguration of the district’s WiFi network during winter break. He remains confident that the district’s networking issues can be resolved.

“The aging structure wasn’t built for the number of devices out there now since it’s a bring-your-own-device district,” Fishtrom said. “The more advanced these devices become, the more we’re going to need to make sure that everyone can connect to our network.”