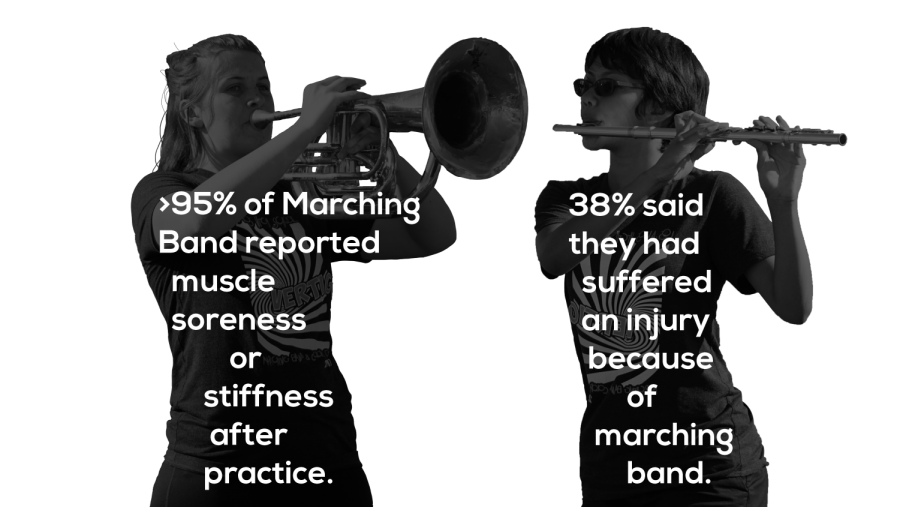 August through November, the most common phrase that comes out of my mouth is, “I can’t [insert fun activity], I have band.” I spend Monday, Tuesday and Friday nights, Wednesday mornings, and all day Saturday at practice. Even when I’m not at practice, the catchy tunes and sounds of drumsticks smacking together still swirl around in my head. I dedicate all my time to an activity that most people don’t even consider a sport.

Marching band is classified as a sport by the school district, and you can use it to get P.E. credits. But if you go up to a stranger in the hallway and ask if marching band is a sport, they’ll laugh. While marching band fits the technical definition of a sport, it doesn’t even cross most people’s minds as one. As a relatively in-shape (okay, debatable) teenage girl, I regularly leave marching band as a sweaty, worn-out mess. Marching band is physically challenging perhaps in a different way than football or cross country, but that in no way disqualifies it from being considered difficult. I can’t even begin to argue that I could run for 10 miles or withstand getting pummeled by a 200-pound man, but the unique challenges marching band presents are just as difficult to master.

More than the physical challenge of near-constant movement for almost 10 minutes, playing music simultaneously is what makes the activity challenging. The act of marching is deceptively difficult. Many people feel that because the activity consists entirely of “walking,” marching band is less of a sport and more of an event for older women who have a passion for power walking. However, walking and marching are two completely different things. Though at its core, it is technically walking, the level of precision required to turn it into marching, and to make it look uniform and clean, is exhausting. Getting anywhere from 50 to 300 high schoolers to move in perfect unison is not an easy feat, considering that most high schoolers have trouble staying single file while waiting in the pizza line. The amount of air you have to use to get a full sound out of the instrument while still marching with proper form is much harder that it looks. You have to engage your core and diaphragm, while still making sure that your arms and legs don’t look like one of those floppy guys they have in front of car dealerships.

Without a doubt, however, the most deceptively tricky aspect is the uniforms. While soccer and baseball players wear uniforms designed to be as fitting for the sport as possible, marching band uniforms are almost exactly the opposite. The stiff, heavy uniforms used by bands when parades were the extent of the marching requirements are still used today, inhibiting movement and providing an added challenge. The mental aspect of memorizing anywhere from 70 to 100 specific locations you must be at at a specific time is extremely mentally taxing, in the same way that chess is considered to be a mental sport by some.

In terms of competition, although bands don’t compete directly against each other like football does, there are very specific rules and rankings that bands are judged by. There are different levels for different band sizes, and different leagues to participate in.

Additionally, marching band exists at a high level outside of high school, through an organization called Drum Corps International, or DCI. DCI is an extremely intense league that 24 bands compete in, not including lower levels, where bands that participate don’t actually compete.

Many people say marching band isn’t a sport simply because of how easy it looks. Watching something and actually doing it are two incredibly different things. I can’t even count how many times I’ve seen someone sprint past me and thought, Oh I could totally do that, and 10 minutes later, I’m wheezing on the ground after “sprinting” for two and a half seconds. It might not look like it, but moving consistently for the better part of 10 minutes while holding a heavy instrument and having perfect posture is very physically taxing.

Marching band is a sport that requires lots of practice, merits you little recognition (albeit a lot of embarrassment when you wear the hat), but most of all, fuses mental, physical and artistic abilities to create something great.