iPhone 12: The trailblazer for a new era of smartphones 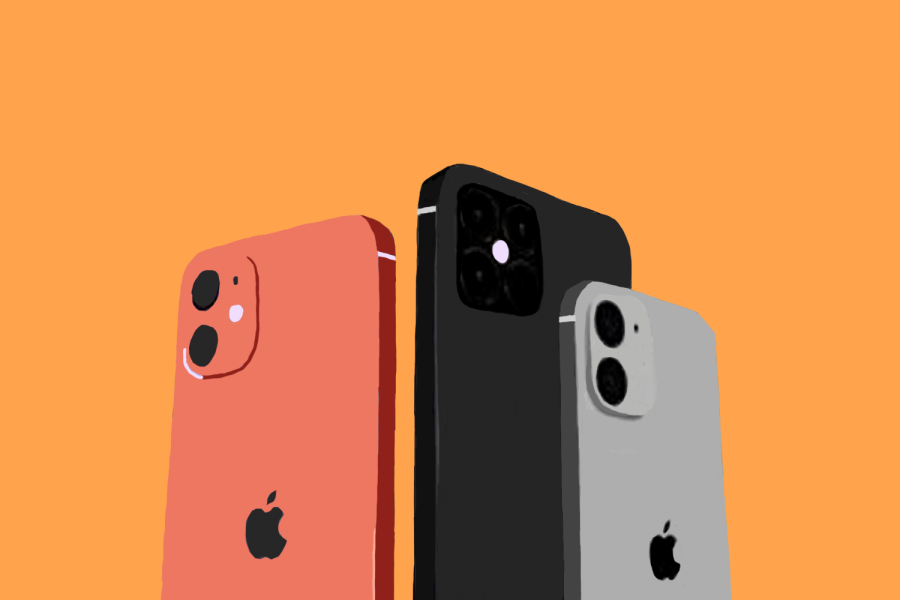 With the recent release of the iPhone 12, Apple brings a variety of new technological innovations, such as impressive 5G technology and a new A14 bionic processor to the table, making it one of the best smartphones currently available on the market.

Every year, millions of people across the world — from the technology connoisseur to the average student — wait for the fascinating new products unveiled during Apple’s annual product release event. Finally, after months of built-up anticipation, on Tuesday, October 13, Apple announced the arrival of their new iPhone 12, a product that would bring upon revolutionary technology which outshines many of its competitors.

During this year’s event, Apple revealed four different models available to the public: the iPhone 12 mini, the iPhone 12, the iPhone 12 Pro and the iPhone 12 Pro Max. The costs range from $699 to $1099, which seem a bit pricey at first. However, considering the improvement in features such as the phones processor, camera, drop resistance and screen size, compared to its predecessors, the iPhone 12 it’s definitely worth purchasing.

As per usual, Apple increased the processing power available in its newest iPhone. But in comparison to many of their previous models, this year’s processor blows the others out of the water. Apple unveiled the introduction of their A14 bionic processor, a chip that acts as the brain of the smartphone and one that is much more powerful — both in terms of speed and efficiency — than the previous iPhone 11’s A13 processor.

Not only is this a huge improvement compared to Apple’s previous processors, but even against competition like Android’s Snapdragon 865 processor used recently in Samsung’s Galaxy Note 20. The A14 has a much better battery life and CPU performance (or how efficiently a processor can complete a task) compared to its Android competitor. Even though these features in previous iPhone models haven’t been the greatest, the iPhone 12 is here to break that trend.

Major upgrades have been made to the cameras on both the iPhone 12 and iPhone 12 Pro. Unlike the iPhone 11, Night Mode is now available on both the back and front facing cameras. Without a doubt, the iPhone 12 has the best low-light portrait shot performance on any iPhone thus far. Even compared to other smartphones with stunning cameras such as Samsung’s Galaxy Note 20 Ultra, the iPhone 12 continues to maintain the upper edge. With a self-adjusting camera aperture of f/1.6 (a measurement of the camera lens speed), the iPhone 12 Pro is able to capture more light than the Note 20’s f/1.8 camera, ultimately capturing an image in night mode that is more visible and filled with detail.

For the first time ever, Apple has also introduced a Light Detection and Ranging (LiDAR) scanner to both the iPhone 12 Pro and Pro Max cameras. Boiled down, it’s a scanner that uses lasers to determine the distance and depth of objects, opening up many new possibilities for using augmented reality in apps. Online shoppers can now see how well clothes fit them and social media apps will bring new features to their platforms.

Even though Apple was the first to introduce LiDAR to a smartphone, a series of Android phones have used time-of-flight sensors which operate in a similar fashion,  giving Android smartphones an advantage over previous models of iPhones. However, LiDAR has proven to not only be more accurate with its ability to scan the surrounding area, but to have a much longer range as well.

When buying a new phone, of course it’s important to factor any new and improved features, but also the longevity of the phone itself. The iPhone 12 provides the best of both conditions. It’s a testament toward Apple’s innovative prowess, along with their constant dedication toward evolving the future for smartphones. Apple has proven that no matter how tough their competition seems to get, they still manage to implement technology that allows their phones to stand above all others.