The confusing intersectionality of the queer Asian identity 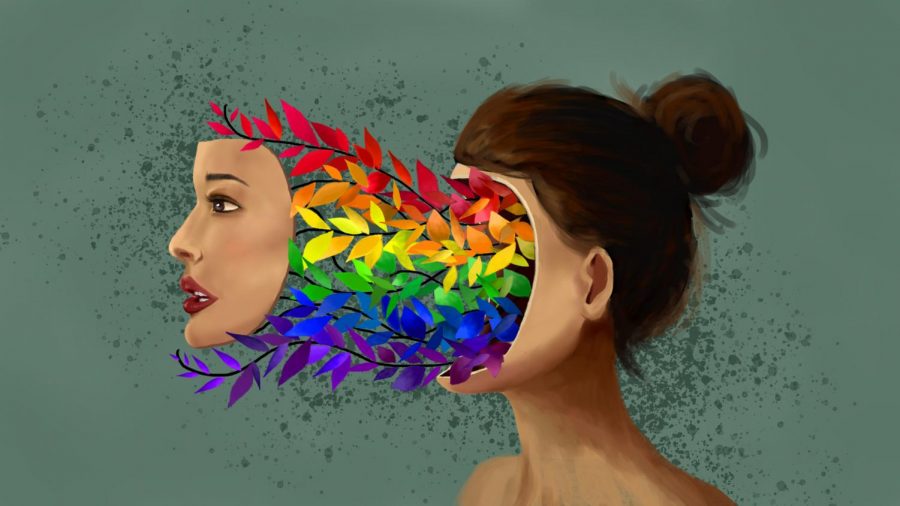 LGBTQ+ folk often have to hide who they are on the inside, and we often see that identity doesn’t match what’s on the outside. As an Asian American, it’s rare that we are seen as LGBTQ+ folk and instead are seen as singular facets, made of race or sexuality but people are more complex than that.

Note: Rose Liu is the graphic artist for this article.

To qualify that, it’s not super uncommon to be Asian and LGBTQ+ among people I know. But when we zoom out of our Bay Area microcosm, we see that most communities in America don’t have as many Asian Americans.

There’s something else we have to consider when we talk about representation: age. I don’t know any Asian LGBTQ+ adults, only teenagers my age, so it’s difficult for me to see a future for myself. I like to think of myself as independent, but the truth is, we all want someone to light the way and prove that it is possible.

Because I’ve rarely seen someone like me, who has shown me that it is possible to be who I am (healthily), I’ve been lost in myself for a while. I’ve never been able to find an agreement between my culture and my sexuality, a time when I can be confident in being both Asian and queer. It’s easy to feel lost about who you are. And it’s so much easier when there’s no one like you anywhere. I’ve barely seen anyone like me.

I’m more scared than ashamed or nervous because maybe, just maybe if I were to actually be my whole self, equally queer and Asian American, there would be no one to relate to. Beyond that, I’m scared that being open about this will come with backlash, that my culture would make me feel ashamed of myself and that my family wouldn’t accept me either.

I know that even if I were white, I would still have these worries, but I do tend to think it might be easier. There are two reasons. First, the rare acknowledgement of intersectionality. Second, cultural pressure from being Asian American.

Intersectionality is the crossroads of a person being multiple types of “minorities” (e.g. LGBTQ+, POC, disabled) is rarely portrayed anywhere, which makes people believe that people fall into one singular category. When a person is an intersection of two minorities, it greatly reduces the chance that they will be seen on the big screen or acknowledged in larger settings.

Take my intersection: Within the LGBTQ+ community itself, there is an inherent focus on white people. They are seen as the default, so queer people of color’s experiences are often shoved under the rug. I don’t hear their stories.

Intersectionality is also about unique struggles. Each intersection has different issues to deal with, which is why talking about them is important, but beyond that, it can make understanding what is ahead fairly difficult. Due to the narrow lens through which people consider the world (and often themselves), struggle is seen as a binary when it is more of a spectrum, like sexuality. For me, struggling as a queer Asian American has been about finding a niche to be myself in between jokes about the right type of mango and internalized heteronormativity.

This is when external cultural pressure comes in. As an Asian American, the stereotype of a model minority has affected the way I see myself. To quote the iconic comedian Hasan Minhaj, on his thoughts about cultural expectations, “Put your head down. Be a doctor, get a house in the ’burbs, let them call them whatever you want.”

The idea of keeping your head down is universal within some Asian American communities. There is this internalized fear of speaking out for fear of losing the cushy place as that model minority, losing the privilege that sometimes comes with being Asian. Keep your head down, don’t think about what they call you, it doesn’t matter what they say if you get past them, if you get the money. That’s why people don’t speak about being themselves or the struggle they go through.

Being queer inherently rocks the boat. Having that classic mom-dad and two point five kids family isn’t always possible if you’re queer. Maybe you settle down in the way my parents envision and maybe you don’t. But that possibility, that possibility that you don’t end up with the white picket fence, it makes it scary. And because I’m a girl, this pressure is even more enhanced because I’ve been conditioned to think about their future in terms of children and marriage, and it genuinely freaks me out.

What if I don’t live up to what my family wants for me? I can see a future where that drives a wedge between my parents and I. This constant pressure to have kids (so my mom can have grandkids) has driven me just a little insane. I don’t want to have to live my life for my mom, I want to live it for me. Maybe that life isn’t with a man. Maybe that life isn’t me having kids. But that’s what’s been expected of me.

In Asian communities, there is this inherent focus on a larger community. Family comes first, my dad tells me. Family will always come first, so can you draw a line between your wants and your family’s? Is it even possible?

Family acceptance is complicated. Regardless of race, almost every LGBTQ+ person I know worries about family acceptance. Whether it is cultural, religious or just general prejudice, it is difficult when your family doesn’t accept you for who you are. But there is another common division to keep in mind for Asian Americans, which is the clash between first and second generation immigrants — between the parents who came here and the kids who were born here.

When a kid is LGBTQ+, a new division arises. I’ve often felt as though being who I am makes it hard for my parents to get me and I’m not alone. Here’s the thing I’ve realized, though. Sometimes we have to hide parts of ourselves to feel understood and maintain a relationship with our parents, which is definitely not ideal, but I guess it’s up to me what to do. I can have it both. It’s a game of give-and-take.

Connection to my heritage doesn’t necessarily mean losing my connection to the LGBTQ+ community, even though it seems like that sometimes. I don’t know how it works, I’m going to be honest. There’s no one to really model, no clear path ahead for me. So yeah, it’ll be weird. It’ll be hard.

But that doesn’t mean I’m going to give up.