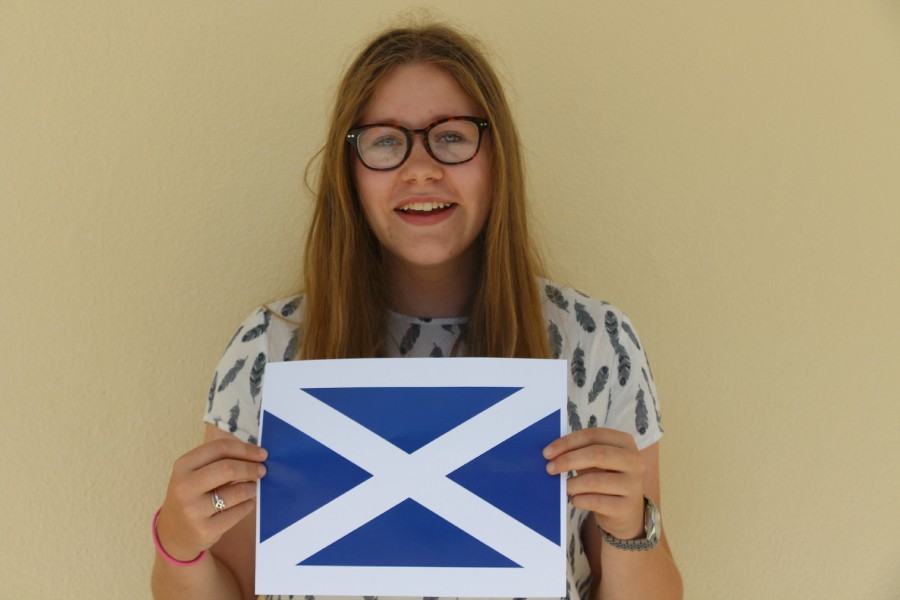 Senior Rebekah Dawson-Bowman was born and raised in the countryside village of Uplawmoor up until this year, when she made the international move to Los Altos, California. Photo by Allegra Maeso.

The surname Dawson-Bowman rings a bell for many students because of the school’s longtime English teacher Keren Dawson-Bowman. However, few students realize it connects her to her stepdaughter, senior Rebekah Dawson-Bowman, who is new to the school from Scotland this year. And, yes, she has an accent.

“Some people have been like, ‘Are you from Ireland?’ And I’m like, ‘Not quite…’” Rebekah said, laughing at the mistakes made in trying to differentiate all the parts of Great Britain. “[And] there is no ‘general British’ accent, [so] this is the thing that I’m going to teach everyone here about.”

Born and raised in the countryside village of Uplawmoor next to Glasgow, Rebekah did not grow up with cows, but she did often go horseback riding in the green fields and rain. While Rebekah finds herself comfortably adjusting to Los Altos and the Bay Area, she notes that there are some small, interesting differences that have made her smile.

“It’s very strange coming in, where we both speak English, but use different terms,” Rebekah said. “They’re definitely very different, and [sometimes] I’m like, ‘What? What’s that?’ [And then] I’ll say something and people will look at me like, ‘What?’”

Common mixed-up British and American English terms include chips, which are fries, and crisps, which are chips. Most of these interchangeable words are only mildly confusing, but sometimes they can cause a bit of embarrassment.

“Oh, pants, that’s a big difference,” Rebekah said. “Pants is something else in Great Britain…  They’re ladies’ underwear! We call [pants] jeans if they’re denim, or [just] trousers. The other bad thing is that we would call a razor, a ‘rubber,’ which here… it’s awkward. That’s one I need to be careful on.”

At school, Rebekah enjoys a variety of subjects that she would not have been able to take back in Scotland. The Scottish educational system requires students to narrow their subject choices with each succeeding school year to be able to specialize in a major by senior year.

“[The process] was difficult because you were expected pretty much from the age of 13 to know what you want to do,” Rebekah said. “Here… you do one subject, and then you can leave it or you take it up to a higher level. Normally in Scotland, you had to take on to the next level.”

Another major difference between home and here is the school size. Rebekah attended Uplawmoor Primary School with five other students in her year, and then Eastwood High School with 100 plus classmates. Because of the small class sizes, the primary school formed composite classes with either the year above or below that of Rebekah. On the other hand, at Los Altos High School, the students alone well exceed Uplawmoor’s entire population of approximately 600. In addition, all British students, whether of public or private schools, are required to wear uniforms.

Uplawmoor’s small setting inevitably led to a tight-knit community between all families. Rebekah recalls the library-hosted cafe every Tuesday and Thursday, and popular Gala days during which people in the community set up stalls for face-painting, body-painting and other kinds of festival fun. More national Scottish traditions that Rebekah enjoys include Burns’ night, dedicated to renowned Scottish poet Robert Burns, and ceilidh dancing, a folk-like dance performed at conventional Scottish weddings.

“We were required to do about four weeks [of ceilidh] every school year as part of Physical Education, so everybody knows it,” Rebekah said. “If you’re with the right group of people, [ceilidh] is very exuberant and somewhat violent in some cases. I’ve ended up getting bruises on the inside of my arm… and I’ve literally got spun round off my feet. But, it’s good fun.”

The most passion Rebekah generates for a sport is rugby. The British equivalent of American football, rugby is rough and raw, and it requires none of the extra padding and gear worn by American players.

“I went to a 49ers game [in early September], and for me, it was very kind of stop-start, so they’d play like four minutes of football, and then they’d stop,” Rebekah said. “And then, they’d have some adverts or like some kind of people doing fire-breathing, a band, cheerleaders. It’s far more showy whereas rugby, I find, is more all about the sport. You’d have play for like 40 minutes, and then half-time, and then another 40 minutes. And it’s far more violent, seeing as they don’t have the big pads and… the helmets. I feel like rugby is the real deal.”

Even though Rebekah is increasingly more comfortable in the U.S., there are little things from home she is nostalgic for. For example, she greatly misses her favorite British snack, marmite, a yeasty, meaty creation similar to the Australian vegemite. But for now, she’s found a new distraction.

“I like frozen yogurt,” Rebekah said. “That’s something we don’t get in Britain. There’s too many flavors [though]… [So far] I’ve only been to Yogurtland, but I’m looking for [shop] suggestions.”

As of now, Rebekah plans to stay in the U.S. through college. She looks forward to experiencing the American high school life, like homecoming and prom, the former of which is nonexistent in Great Britain.

“I think I’m going to stay here, and just see how it turns out,” Rebekah said. “Maybe [I’ll] transfer halfway through and do a Scottish university for a bit. [I’ll] see what happens.

And a last message for the school, regarding the infamously violent 1995 movie of Sir William Wallace and the Scottish army that has been the root of so many stereotypes: