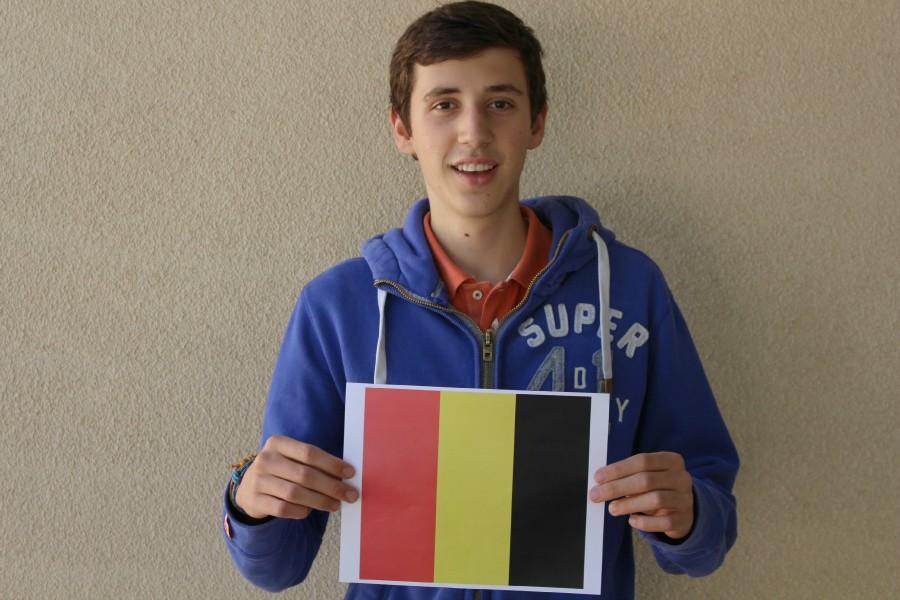 Senior Jens Tuyls poses with the flag of his home country, Belgium. Photo by Allegra Maeso.

Senior Jens Tuyls was born in a Dutch-speaking town, Turnhout, in northern Belgium. After moving to Los Altos in August, Jens is acclimating to the contrasting lifestyles of his hectic hometown and the small suburb of Los Altos.

“Los Altos is a pretty quiet town,” Jens said. “Nothing really big happens [in Los Altos], and it is a small town and I like it because in Turnout, we lived in the center, and it was busy with cars and busses.”

Jens moved to California because of his dad’s job. While Jens does miss his friends from his hometown, he is finding his way at the school easier by the day. After only one month, Jens has already started to feel more comfortable in his new surroundings.

“I quite like it,” Jens said. “It’s different but the people are friendly. It’s nice. I [also] like the interest in technology because I personally like engineering and all those kind of things.”

Jens had been to the U.S. once before; prior to moving permanently, he and his family toured famous locations in California such as San Francisco and Yosemite to begin the transitional process to his new home.

Since he plans to attend college in the U.S., this fascination with technology is one that Jens may apply to his studies. Even with the limited amount of time he has spent in the U.S., Jens has noticed the benefits of the interactivity and diversity within the U.S. education system.

“In Belgium, we just listen [to our teacher] the whole class and take notes,” Jens said. “The main difference here is the students [debate] against each other. In Belgium, it was more like the teacher saying things and you just [wrote them] down. [A] big difference here [is there are] more students working together.”

Jens appreciates the wide range of cultures and personalities that exist within the school.

“With [this] school, I think people are more accepting for international students,” Jens said. “This school is really open [to] different kinds [of] nationalities. That’s a big difference.”

While Jens does not have any sort of immediate plans to go back to Belgium, he does wish America had one thing his hometown excels in: Belgian chocolate.

“[Belgium] is where you can get the best chocolate there is,” Jens said. “It definitely is better than American chocolate.”