Impressions of the “Gilmore Girls” sequel 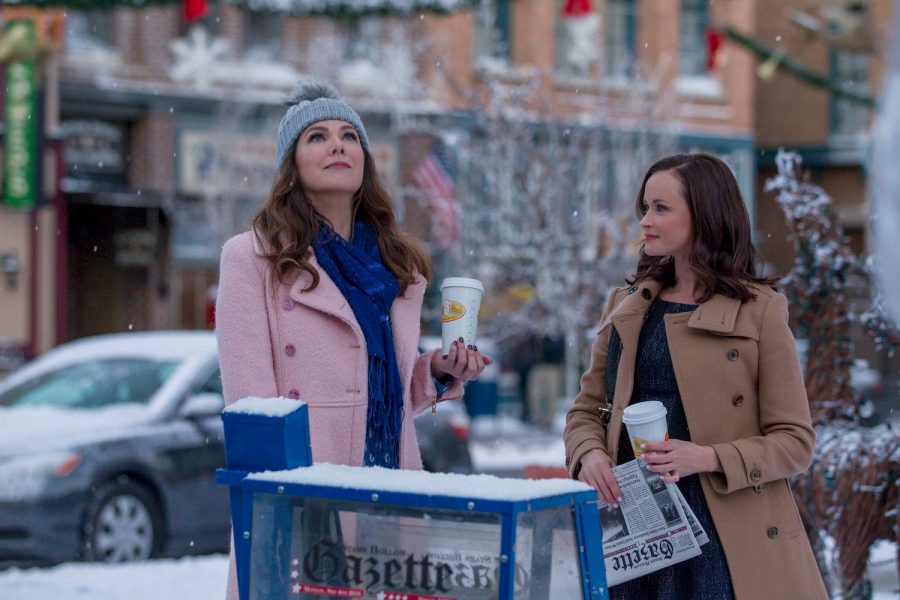 By Hanna Khosravi and Sana Khader

On November 25, millions of fans returned to the famous fictional town of Stars Hollow, Connecticut, a place overrun with crazy neighbors and antique stores. “Gilmore Girls,” written by Amy Sherman-Palladino and Daniel Palladino, is back as a four-part Netflix original series, and while it was certainly nice to return to cozy Stars Hollow and its cast of peculiar characters, we were disappointed in the writers’ depiction of Rory’s (Alexis Bledel) transition from the end of the seventh season to the revival.

“Gilmore Girls” is, above all, a dialogue-driven show, and the Palladinos peppered the now-signature fast-paced writing with references to pop culture and literature. Rory and Lorelai, the show’s mother-daughter duo, grounded what could otherwise be a rather cliche story in an innovative way with their sharp-tongued heart-to-hearts. With the tagline “Life’s Short. Talk Fast,” “Gilmore Girls” was a guilty pleasure that never actually felt like one. It was light viewing, but it wasn’t a soap-opera or a cheesy small-town exposé. The storyline revolved around two highly intelligent women who used their wit and charm to navigate their funky, honey-hued, unrealistically comical lives. Viewers loved them for it — so much, in fact, that they tore through the show’s seven seasons repeatedly when they began to stream on Netflix two years ago and revitalized the “Gilmore Girls” following.

And so it hurt viewers when they realized that the 32-year-old Rory of the revival was no longer the graceful and hard-working journalist we left at the end of the original series. What looked like determination in her youth translated to entitlement in her adulthood — and it seems that this might have been a deliberate choice. The Palladinos made it clear that it was never their intention to have Rory’s life tied up perfectly by the end of the revival. But it was still a shock to the viewers to see her arrogant reactions to her seeming failures.

Rory’s career mishaps cast such a large shadow over the revival that fans missed out on further exploration of Rory’s relationships. It’s a major departure for the original series, in which it felt like the character of each season was shaped by Rory’s and Lorelai’s romantic lives.

However, we were satisfied with Lorelai (Lauren Graham) and Luke’s (Scott Patterson) coupling for the majority of the series. Had the writers chosen to keep up the “will-they-won’t-they” act they milked in the original show, viewers would have probably taken to the streets with pitchforks and protest slogans. Lauren Graham, arguably the superior actress in the mother-daughter duo, took back the reigns of the charismatic Lorelai persona with ease. Seeing Luke and Lorelai consider having a child in 2016 with the help of Paris Geller (Liza Weil), Rory’s hyper-competitive frenemy turned internationally-renowned fertility specialist, was a fun quip on modern family life that might not have been written into the show 16 years ago.

But the series hits it out of the park not with its main two heroines, but with its portrait of Emily (Kelly Bishop), Lorelai’s controlling mother and the eldest Gilmore Girl, who is refashioning her entire life following her husband Richard’s death. Emily, who maintained an intricate balance of villain and sympathetic grandmother in the original series, is no longer in the show purely to spar with Lorelai at “Friday night dinners.”

Instead, we see the previously buttoned-up Emily in jeans and T-shirts, actively endeavoring to take charge of her life after losing her greatest friend and partner. And she most definitely succeeds — she refuses to be subjected to the victimization to which she was constantly susceptible in the original series, and makes a conscious choice to discard anything that makes her unhappy. And the fact that Emily had the entire revival’s only scene of foul language — in which she tells off her fellow socialites and walks out of her gossip-heavy women’s group — has to be some kind of badge of honor. We were pleased to see that Emily is ultimately able to find her own happiness, independent of the many things she was tied to as a married woman.

Though some were disappointed with the major cliffhanger dropped in the last ten seconds of the series, it did feel as though the writers had wrapped up all other plot lines successfully. Rory’s future was left hanging uncertainly, but we can reasonably imagine Luke and Lorelai living the rest of their lives in cozy Stars Hollow, visiting Emily in her Nantucket home in the summer. As for Rory, we can only hope that she realizes a few fruitful freelance pieces do not guarantee her permanent bragging rights, and that the determined, passionate teenage Rory we know and love finds her way back into her adult life. And — for the sake of indulgence — that she ends up with the right guy (we’re totally Team Jess).