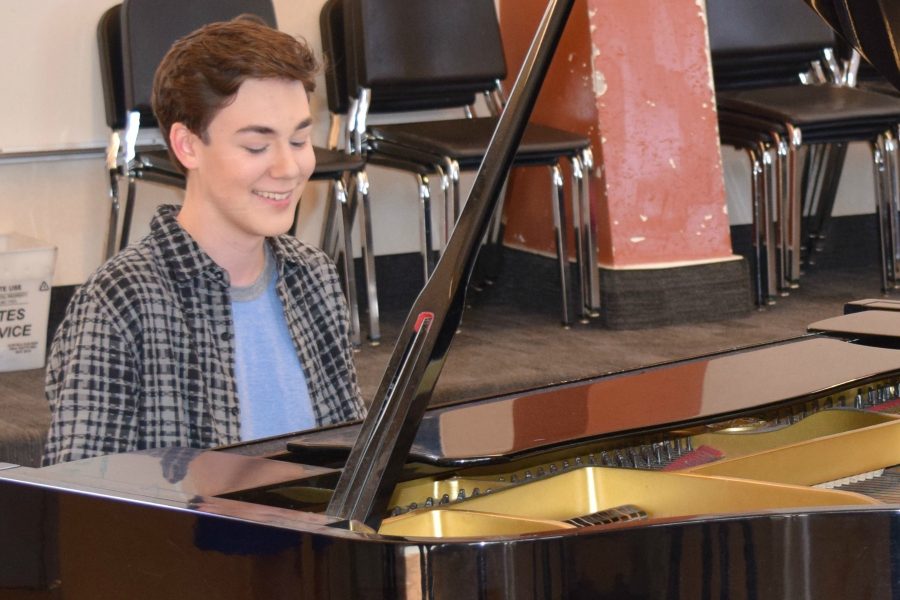 Sophomore Henry Wright has always surrounded himself with people. Even as a kid, he often performed plays in his bedroom for others. Through his involvement in performing arts programs on and off campus, Henry finds the most value in the connections he forms with others.

“I still love to sing but mostly I really enjoy the company of other people who sing — for whatever reason, people in performing arts are some of the most down to earth, respectful, inclusive people which is really nice,” Henry said.

In his eighth grade year, Henry continued to pursue musical theater and began work for Peninsula Youth Theatre’s Les Miserables the musical. But one day during rehearsal, Henry was met with a challenge he would have never anticipated — cancer.

“I was Marius so there was a scene where I had to catch Eponine because she was dying and when that happened my knee broke out and there were crazy amounts of pain,” Henry said. “I thought I had just broken a bone.”

Henry recounts the blurry period of being hauled from doctor to doctor, each of whom admitted him to further treatment, “just in case.” Brought from his pediatrician to an orthopedic surgeon to a radiologic technologist, he was given MRI which revealed a hidden section of underbone that looked abnormally white. According to his biopsy, Henry’s lower thigh bone was found to be malignant and he was diagnosed with osteosarcoma.

“It’s hard to explain but cancer is always this thing that you hear about all the time, but it’s always something that happens to other people,” Henry said. “You get sad about it, but it’s never something you can even fathom happening to yourself. It was a thing that was happening to me, but it didn’t feel real.”

In just two weeks, the tumor was removed entirely in a super-invasive surgery where a large portion of his leg was cut out and replaced with an endoprosthesis made of metal. The cancer itself brought only slight pain but undergoing three layers of chemo — Methotrexate, Doxorubicin and Cisplatin — caused arduous side effects such as nausea and weight loss. Despite these physical side effects, for Henry, the emotional endurance was the most challenging part of making the recovery.

“I didn’t realize it happened until it was over. Your body just kind of goes into a mode of shutting off all emotions — dealing with this and only this. Your physical needs come first and your emotion goes away,” Henry said. “My body shut down for those nine months and I became a machine — go to the hospital, get treatments, do everything I could to get better, go home and deal with symptoms, go home and take more medication for those symptoms and repeat.”

After finishing chemo last December, Henry has made an expeditious recovery from the disease. He is left with more gratitude and emphasizes his newfound ability to find more enjoyment in the seemingly insignificant parts of his life.

“If you’re a person who hasn’t had that many lows you can’t have that many highs,” Henry said. “I feel like because I was in such a low place and I really experienced so much crazy stuff, I just have a happier outlook towards everything and I’m really grateful for little things. Everything’s a lot brighter.”