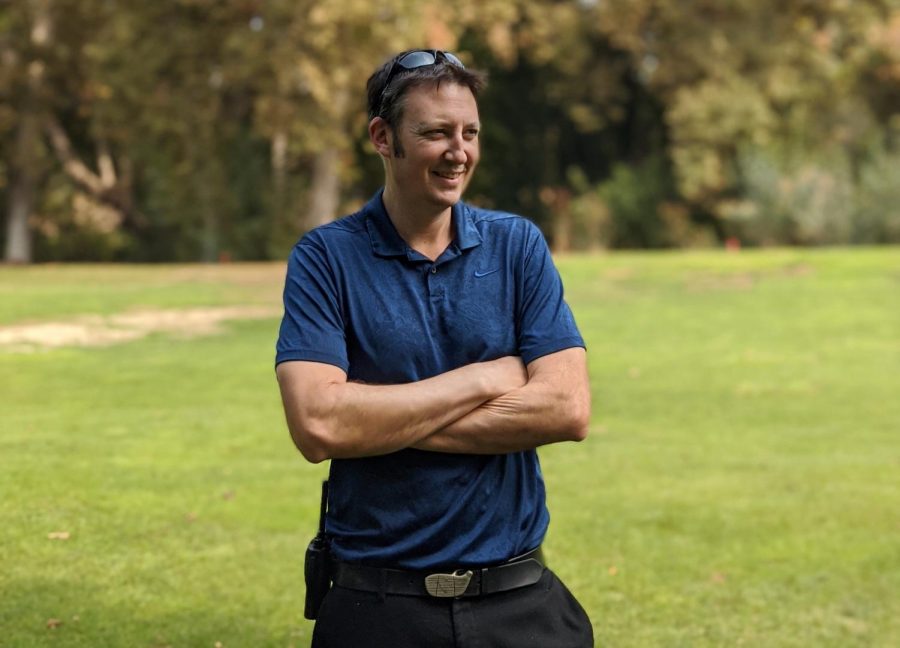 Abe Roof, Los Altos High School’s new girls golf coach, has been playing golf since elementary school. He also has a long held passion for studying history. Even though the two don’t seem to go hand in hand, Roof is able to see there are more similarities than what meets the eye.

Girls golf coach Abe Roof first got interested in the sport when he was in elementary school and watched the adults in his life play it. His curiosity led him to develop another deep passion: history. He was specifically interested in it on an international scale and eventually pursued an undergraduate degree and PhD in the subject.

But how do golf and history come together? For this new coach, it’s a mix of coaching, mentoring and surprisingly engaging bus conversations.

In addition to coaching the Eagles, Roof is the general manager of the Bay View Golf Club in Milpitas, which was the girls golf team’s home turf and practice green. He learned of the job opportunity from an LAHS student he previously coached: sophomore Grace Cai.

Even though this is his first time coaching a high school team, Roof has experience running the Deep Cliff Players Academy in Cupertino. There, he coached a range of players, including high school students.

Los Altos is just a two-hour drive away from Roof’s hometown of Sacramento, where he was introduced to golf by his grandfather in late elementary school. Initially, his grandfather was not too keen on bringing Roof into the world of golf, but he eventually came around.

“I asked him if he’d take me to the range, and he said ‘No, it’s for older people,’” Roof said. “Then I hit his wiffle balls over the fence, so he took me down to the range and it just kind of grew from there.”

As Roof further developed his passion and skills, he began taking lessons from a professional golfer. Apart from athletic aspirations, Roof was not particularly interested in his high school’s American history classes, but he took college as an opportunity to expand his knowledge of world history.

“There’s this whole other world out there that really matters,” Roof said. “When I got to college, I had a professor who taught Chinese History. I was like, ‘Wow, this is fascinating and important,’ and so I kept taking those classes, took an extra year and did a second thesis.”

Eventually, he put golfing aside for a few years while he attended the University of California, Santa Cruz, and graduated with a Bachelor of Arts in History.

Roof knew he wanted to further pursue his passion and a few years later, attended the University of Calgary in Alberta, Canada. There, he got a Master of Arts degree and Doctor of Philosophy, both in History with a major in Economic and Diplomatic History. He also minored in Modern U.S. and Modern Chinese History.

Even though golf and history may not have a direct connection, Roof has found that his  two passions often overlap. When he coached at his Deep Cliff, Roof remembers that he and the players would occasionally talk about history and world events on the bus rides to away matches.

“Usually, it was a really lively conversation,” Roof said. “Part of my training was to challenge people to think critically and ask questions about the world and how it ended up this way.”

Despite one being a school subject and another a sport, Roof sees both history and golf as ways to better understand others and the world around them.

“The discipline of History is the reinterpretation of lived lives viewed through historical evidence,” Roof said, “while golf is a metaphor for life and in each round a player feels many of the emotions of a lifetime, condensed into a few hours.”

Roof’s coaching philosophy emphasizes positivity, as the sport is a mental game and relatively short in length. Although golf is often seen as a very individual sport, Roof believes that players are more so playing with one another than against each other.

“Golf is very fair,” Roof said “There are no judges and even if you’re playing with somebody, you’re not against them. Their success doesn’t hurt you.”

Although the season was not under ideal conditions, Roof already anticipates the upcoming fall season and hopes the team will be able to play without restraints.

“I’m looking forward to this fall because it looks like it’s going to be normal,” Roof said. “We’ll be able to work our way up to the upper division play in the playoffs and the team should be pretty good. I’m definitely excited.”

Even during this year’s shorter season, the LAHS players got the chance to make positive memories with the new coach.

“Our coach is really helpful,” senior Joanna Hsieh said. “I’ve improved a lot on my swing and my short game since he started coaching our team.”