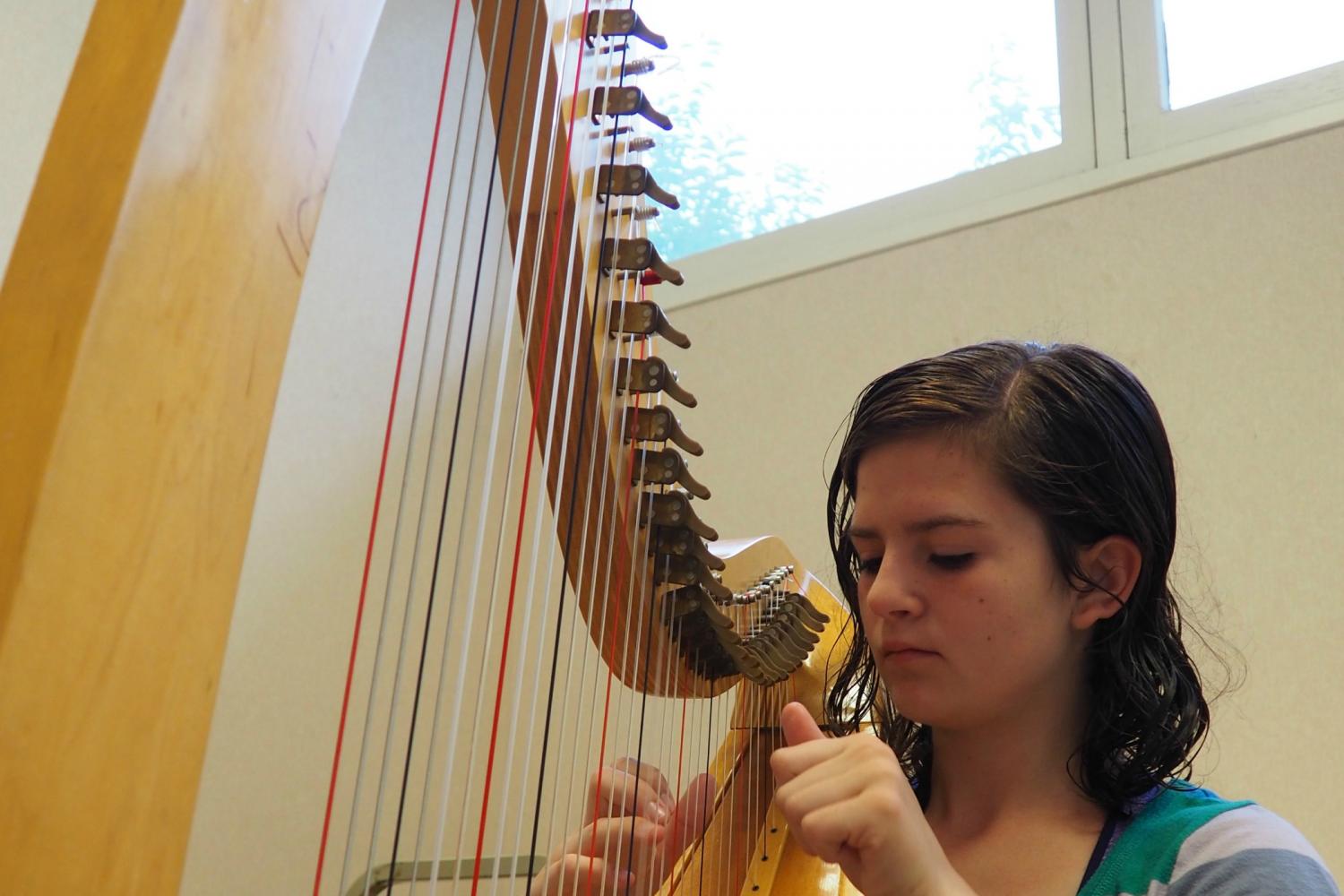 When imagining a harp, often times, we picture a Greek goddess, or maybe an angel, easily plucking the instrument while eating grapes and wearing fine robes. However, in the case of junior Brooke Bettinger, her journey toward playing this instrument has been less than graceful. From childhood, Brooke struggled with her hands, which were extremely underdeveloped and weak for her age. To cope with this, she enrolled in occupational therapy, which consisted of various hand and arm exercises.

“I didn’t want to do [occupational therapy],” Brooke said. “[But] I had trouble holding a pencil, I’d type when others would write.”

Brooke began by taking violin classes in Cleveland, prior to moving to California. Playing the violin neither helped strengthen her hands, nor did she enjoy it. So, when she moved after her father got a job at Stanford, she and her parents felt it was time to try something new.

“My mom used to teach piano lessons… I thought it was pretty cool because she was really talented and [was able] to help me,” Brooke said. “[When] I don’t understand how to play something, [she] helps me on the piano.”

Choosing the piano also allowed her to stop occupational therapy, as the repetitive and strenuous movements of the instrument helped exercise her hands. However Brooke wasn’t sure if it was the instrument she wanted to pursue.

At the age of 8, Brooke decided it was time to move on from piano, and began searching for a new instrument that could still replace occupational therapy. She reminisces that the idea of taking harp lessons came out of nowhere, and after meeting with multiple harp teachers and experimenting with the instrument, she decided to take classes and stick with it.

“A lot of [harp] is practicing with your hands, and keeping your hands and arms perfectly still,” Brooke said. “A lot of strenuous things. It’s helped.”

Now, many years later, Brooke is involved in the school’s Concert Orchestra, takes classes and plays at her church. She feels as if she made progress in the harp that she couldn’t notice with the violin and piano, and wants to continue with it into the future, possibly moving on to play for more prestigious orchestras. Brooke also noted that her hands have become much stronger- she is now able to hold a pencil and write, and also participates in Marching Band.

“It started out with me playing really easy stuff, like… ‘Twinkle Twinkle Little Star,’” Brooke said. “It’s worked its way up… gradual increments of difficulty. I didn’t really notice it until I was like ‘Wow, I’m playing stuff that is significantly more difficult.”