Half and half, but not the milk kind 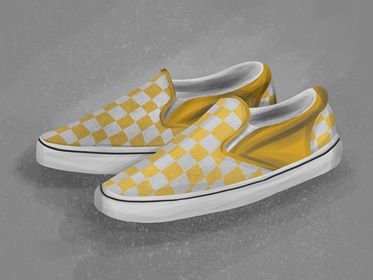 A pair of checkered yellow Vans. Staff Writer Katy Stadler writes about her experiences with being of mixed ethnicity.

I cried after watching the Diversity Assembly last year. And I don’t mean one-tear-rolling-down-my-cheek crying—I mean full-blown-sobs-puffy-cheeks crying. I still remember sitting quietly in the bleachers, watching the colorful, happy, proud performances below. I stayed quiet until lunch, when I had my weekly meeting with a school therapist. I broke down when she asked me if I was okay—that was when the sobs and puffy cheeks started.

It’s taken me almost a year to figure out why I was crying, although I think I had a little bit of an idea at the time.

Sitting in that assembly made me feel small and invisible, stuck in a sea of people I didn’t know. I was looking down at students with strong cultural backgrounds, students who could dance or sing to traditional songs, speak fluently in their ancestors’ languages, students who seemed to know exactly who they were. Their proud displays of culture only reminded me of my own insecurities about mine.

I didn’t know who I was, and it seemed like everyone below me did.

I’m biracial—half Chinese, half a bunch of types of white. I call it “Wasian.” I know what I am, but I just don’t know what that means, how that translates to who I am. I’ve felt in the middle my whole life, unable to fully connect with the Chinese part of myself, unable to connect to the white parts. Which white was I even supposed to pick? Irish? German? English? (If I could, I would have chosen English because of the accents.)

So I was excited when I learned that the name of the Diversity Assembly was “Gradient.” The halls were decorated with signs, huge letters going from black to grey to white. It felt like the school was recognizing the continuous spectrum of colors exhibited in the student body, even the ones that were kind of confusing and blended.

But sitting there in that “Gradient” Diversity Assembly, I felt the immense empty space between myself and my cultures grow wider and wider. It became clear to me then that I couldn’t tie my identity to any part of my race. I couldn’t say that I was Chinese, couldn’t say that I was German or English or whatever other European I was. All I wanted in that moment was to have my own little race box to check on a questionnaire, to pick one thing and be it, to be part of the culture I saw around me.

I know that diversity is valued in our current culture. Whether we achieve that or not is a whole other question, one that deserves a whole novel to itself. But I’ve learned that sometimes diversity, or at least the mask of it, comes with a price. It’s important to fully embrace your culture, but what if you don’t know which to embrace? Everyone wants to know what you are so that they can accept you, so they can determine who you are. They want to know, “Where are you from?” or “What are you?”

I mean, the easy answer is that I’m half-and-half (not the milk kind). I guess I’m not even half and half, I’m more like half and a bunch of smaller fractions.

Thankfully, many are just as confused as I am. I think that my half-and-fraction-ness absolutely bewildered one white jewelry vendor my mom and I met at an art festival. As soon as we entered her tent, she closed in on my mother, baring a bright smile.

“Are you Vietnam?” she asked, as if my mom could be a Southeast Asian country. My mom said no, she was Chinese—or should she have said China?

The woman then turned to me and asked the question any racially ambiguous person has heard all too often: “What are you?” She didn’t even give me time to answer. “Your father must be white,” she helpfully informed me. I wanted to lie, confuse her a little, but I just smiled. “You’re beautiful,” she told me. Because all Wasians are beautiful—that’s what everyone says. I always joke that it’s true, just not for me.

We bought four pairs of earrings from her because they were cheap. I got a pair of bumblebee ones that I still wear to this day, because I love bumblebees more than I dislike that woman.

I knew even then what that woman wanted from me. She wanted to know which box to put me in, where to categorize me in her scattered brain. She was like every other human—afraid of what we don’t know, and so needing to know what everything, everyone, is.

That was what the Diversity Assembly brought out in me. I wanted to fit into a neat little box, just like everyone else wanted, but then I realized that I didn’t. I live in the middle of two cultures, two races, two different images of myself. I’m Chinese but not quite Chinese, white but not quite white. I feel fake trying to order food in Mandarin at a Chinese restaurant, yet out of place visiting my white family in Kansas. If I imagine myself dancing to traditional Chinese music on the shiny gym floor, I cringe and worry about what others would say, whether they’d make fun of me for “trying to be Chinese” or just “trying to be less white.”

I can’t pretend that being Wasian is the worst thing in the world. I’m proud of it. I even have “Wasian shoes,” white and yellow checkered vans. But I’ve learned that labels are important, almost too important. Sometimes it feels like we don’t matter if we’re not easily defined. So many of us are caught in the middle of two or more groups, and that shouldn’t make anyone feel like anything less of a person.

The way I see it, being biracial is kind of like cherry coke: Coke is one thing on its own, cherry is another. Put them together, and you get something just as good, maybe better. It’s something else on its own, with its own identity and culture and soul.

I am cherry coke, and I think that’s enough for me.