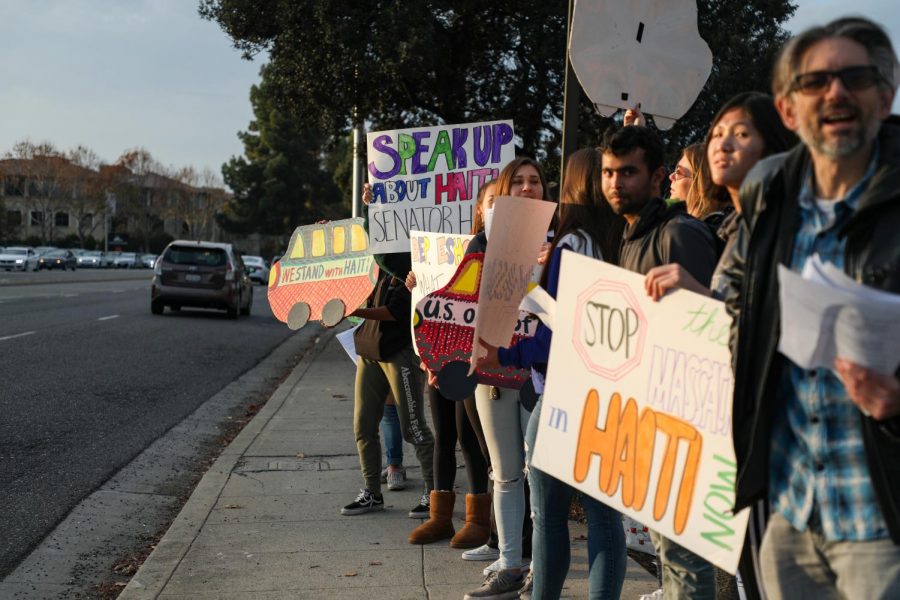 The Students for Haiti Solidarity Club led a protest on International Human Rights Day to raise awareness about the massacres taking place in Haiti.

The Students for Haiti Solidarity Club organized a protest on Tuesday, December 10 at San Antonio Road in Mountain View. The club raised awareness to the murdering of student activists in Haiti in light of International Human Rights Day.

Los Altos students carried signs that displayed some of the victims of massacres taking place in Haiti. They hope to put pressure on elected officials to persuade Congress to withdraw funding toward the current Haitian administration. Last year, some club members met Representative Anna Eshoo, Senator Dianne Feinstein and Senator Kamala Harris. However, they have not followed up with these demands.

“A lot of people in this area don’t know a lot about Haiti, or they don’t really pay much attention to it,” club president junior Annelisa Fache said. “They just kind of brush it off. So we want to bring attention to it and make people realize just how dire the situation is and how people in Haiti need our help.”

In 2004, the US supported a coup in Haiti against democratically elected President Jean-Bertrand Aristide. Since then, the US has occupied Haiti and supported several corrupt elections. The current president, Jovenel Moïse, was appointed by the EU in 2017. Under Moïse’s regime, the number of protests by Haitian students has increased, in which the Haitian police and military torture the activists and, in some cases, murder them. However, the US government continues to give Haiti financial support.

Official reports in Haiti say that the massacres are brought upon by gang violence. However, club advisor Seth Donnelly and Bay Area activist Judith Mirkinson visited Haiti earlier this year and discovered otherwise. They held a Human Rights Assessment under the National Lawyers Guild and Haiti Action Committee. They found that the official reports were inaccurate as the Haitian police were, in fact, killing protesters.

Since 2010, the Haiti Solidarity Club has taken its members on 12 trips to Haiti, but last year the annual trip was canceled due to the violence and disruption in the country.

“Haiti is our neighbor,” Donnelly said. “The people in Haiti are experiencing the greatest levels of suffering and poverty in the Western Hemisphere. The very least we can do is support them in this revolution and call our congressmen and tell them to stop supporting dictatorship.”