Green Team Wraps Up Earth Week With an Almost Picnic 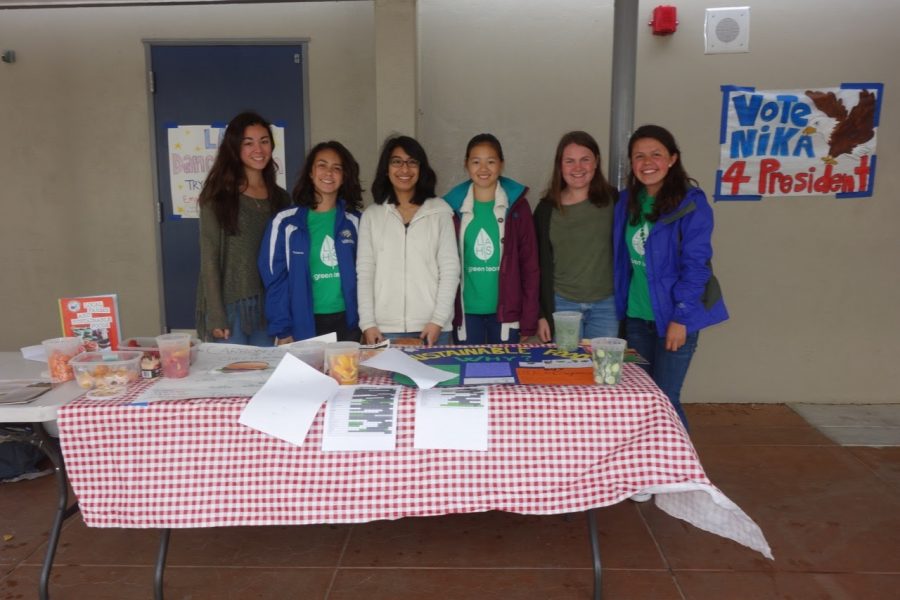 Green Team members pose next to their produce. This Friday, Green Team hosted a table outside the large gym to promote local produce and awareness.

Green Team hosted its final Earth Week lunch event on Friday in the hallway by the large gym. The team offered free samples of organic fruits and vegetables — about $40 worth of produce donated by Milk Pail Market — with the dual goal of encouraging students to stay on campus for lunch and educating them about local food.

Unfortunately, the rainy weather forced Green Team to revise its original plan of setting up picnic blankets and music in the quad.

“The picnic [idea] was new this year, but it wasn’t as successful as we anticipated because of the rain,” Green Team president senior Bianca Champenois said. “We settled on just giving out samples of sustainable and local food. There was no picnic, but students were still excited to try different fruits and vegetables.”

The week’s past activities included electric vehicles in the quad on Monday, a waste-sorting relay on Tuesday, carbon emission trivia on Wednesday and mini-potted succulents on Thursday. Bianca called Green Team’s Earth Week efforts a success but expressed frustration at having to compete for attention with ASB’s annual dodgeball tournament.

“Every single year, they schedule dodgeball at the same time as Earth Day even though it is an internationally recognized day,” Bianca said. “Earth Week is a really awesome event, and many students on campus get very excited about it, which is why I think the school should also put more effort into making it the best it can be.”