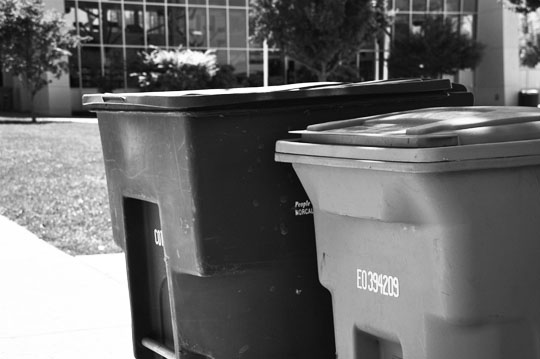 “For a very long time, [Green Team] has been trying to convince people to recycle or compost,” Co-president junior Wendy Wu said. “By taking out the trash cans, we’re basically forcing people to be green.”

Any kind of meat, vegetables, fruit, dairy products, cartons or paper materials are to be disposed of in the composting bins. Everything else can be put into the recycling bin. Green Team is placing laminated labelling stickers onto the two types of cans for the purpose of differentiation.

The team reported to have split the cost of $650 with the administration on 300 stickers that are being evenly distributed among the 50 bins in the central area of campus. The stickers for composting bins say “Compost” or “Anything you can eat” and recycle bins either say “Recycling” or “Anything you can’t eat.” The club said that there are some inedible materials that are biodegradable but are not mentioned on the composting bin stickers for simplicity.

“We were hesitant to use ‘Anything you can eat’ and ‘Anything you can’t eat’ because that’s not always the case, but ultimately decided to do so because they are easy to understand and accurate for the most part,” Co-president junior Sarah Jacobs said. “The simplicity of the system is supposed to make being green easy and convenient for everyone.”

When the recycling company Recology collects the recycling bins, it sorts out the garbage from the actual recyclables. This enables the system to maximize the amount of recyclable material that gets recycled. According to Green Team, the numerous measures it is taking will not completely eradicate waste, but they will greatly reduce it.

“As a school, you’re not going to have absolute zero waste,” Wendy said. “It’s a goal more than a literal thing.”

According to the Environmental Protection Agency (EPA), recyclable items and organic waste constitute about 80 percent of what is thrown into America’s trashcans. Paper, a school’s primary source of trash, can have a substantial positive effect on the environment if recycled. Each ton of paper that is recycled can save 3.5 cubic yards of landfill, 17 30-foot trees, 7,000 gallons of water, 380 gallons of oil, 4,100 kilowatts of energy, and eliminate 60 pounds of air pollutants at the same time. Composting organic waste reduces the amount of solid waste deposited in landfills, reduces atmospheric pollution and replenishes soil with nutrients.

One of the reasons Green Team decided to incorporate a new set of recycling bins was a lack of motivation for students to recycle. Since the blue recycling bins (toters) have lids, students neglected to use them and often threw their recyclables into the garbage can. Instead they are now using open-faced recycling bins and resorting to the toters for underpopulated locations on campus because of the limited quantity of the new, circular recycling bins. Due to the implementation of the new, open-faced cumulative recycling bin, both the administration and the club are unsure about the future of the toters and are waiting for the results of the system to make definitive decisions.

Green Team said that its additional goal along with having zero waste is updating the community on the current advances in recycling.

“We just want to get people into the habit of recycling as more and more packaging becomes recyclable,” Sarah said.

Furthermore, Green Team members regularly volunteer to gather and empty recycling bins from classrooms for the recycling company to pick up. The annual Earth Week event in April will also aim to educate the school community about environmental consciousness.

“We want to reduce [the school’s] waste footprint and I’m hoping students will learn that most of the things they use are recyclable, so the education part of it is important,” Green Team adviser Greg Stoehr said.