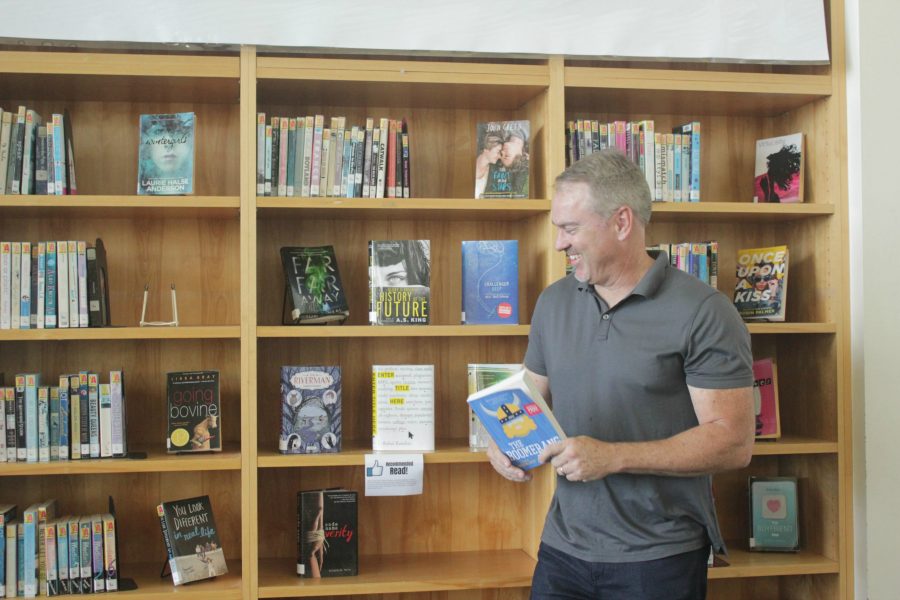 The idea behind school librarian Gordon Jack’s debut novel, “The Boomerang Effect,” began when he noticed that while there was a wide range of humorous children’s literature, there were not as many humorous young-adult books.

“I think that’s a real shame [because] those are my favorite kinds of books,” Jack said. “I see a lot of students who love those books or loved them when they were reading ‘Captain Underpants’ or ‘Diary of a Wimpy Kid’ and there’s no kind of equivalent of those books at a high school level. So a part of me thought since I love those kinds of books so much… I could write something that was maybe funny.”

Jack’s book, published by HarperCollins, is scheduled for release at Kepler’s Books on November 9th. The book is a young-adult novel that follows a troubled high school boy, Lawrence Barry, trying to avoid expulsion as he is framed for a series of attacks at his school that he never was a part of. Inspired by American movie “Arthur” Jack penned his first draft in just one year.

“[‘Arthur’] basically follows this rich aristocratic drunk who gets in these trouble and his stoic butler who takes care of him and gets mad at all these problems,” said Jack. “I thought that would be a good model for me to go off of and make a young adult version of that for high school. In my version, rather than having the kid be an aristocratic drunk, he’s a rich kid who gets high all the time. Rather than having a butler, he has a kid he’s assigned to mentor who may or may not be on the spectrum and [is] logical and the polar opposite of who [the main character] is.”

Despite this being Jack’s first published novel, it is not the first story he has ever written. Years prior to writing “The Boomerang Effect,” Jack worked on another story. Although he successfully queried an agent, he fell out of touch with it, shelving the book and working on “The Boomerang Effect” instead as an individual project that spun into a full-scale novel.

In Jack’s first unpublished book, he notes that he tried to keep switching genres, from adult to young adult, which was the root of his issues. However, the experience being a librarian and working amongst teenagers has allowed Jack understand the YA genre better, helping him write “The Boomerang Effect.”

“I have never read as much young adult literature when I was an English teacher [but] as soon as I became a librarian, I had to immerse myself into this genre that I knew very little about and loved it,” Jack said. “The librarian work gets me into the world I’m trying to write for. Also, just being around teens all day helps me be in that world and understand that world. My work as a librarian informs my reading and everything that I read informs my writing in some way.”

While Jack integrated most of the revisions editors made in his story, he fought to keep a controversial subject in — the word “gay” being thrown around casually as a derogatory term. Although Jack does not advocate using the term in that manner, he believed it to be an essential part to understanding his main character’s pressures and motivations.

“The book in some ways deals with the pressure guys experience to be masculine and a lot of times that pressure comes out with guys calling anything that’s not traditionally masculine gay,” Jack said. “You hear that kind of word being thrown around a lot and it’s one of those words that people still feel okay to use amongst their friend. I wanted to represent that because I think that’s how guys talk when they’re amongst each other.”

Jack’s editor expressed concern over keeping gay jokes and how that would affect the release of the book, but Jack believed that those jokes were important to the root of the story and understanding why certain events occur in his book.

“My character loves origami, and he also has a friend who’s a male cheerleader,” Jack said. “Neither are traditionally masculine endeavors, so they get teased a lot. One of the characters says ‘I don’t care, I’m still going to [be a cheerleader], I love to do it’ [while]… the main character says ‘Okay, I’m not going to do this anymore, I’m going to start smoking pot instead,’ because that’s more socially acceptable. The book really talks about how guys respond to that kind of pressure, but in order to represent that I have to put in these gay jokes. I felt like it was important because the… main character’s problems start from being in a world where what he’s doing is not socially acceptable. To take [the gay jokes] out makes the pressure that he experiences not as important. I fought for that to be in.”

While writing the draft for “The Boomerang Effect”  only took one year, the rest of the writing process took two years, including the process of querying an agent, and revising and editing the manuscript repetitively. However, Jack acknowledges that completing the first draft of the book was a quick process because of how much he enjoyed writing it.

“This one actually came pretty quickly I think because the… whole thing was just to be silly,” Jack said. “I wasn’t trying to do anything with a big message or theme, I was just having fun writing it. I was just trying to make myself laugh and it just ends up being very silly… I had fun.”