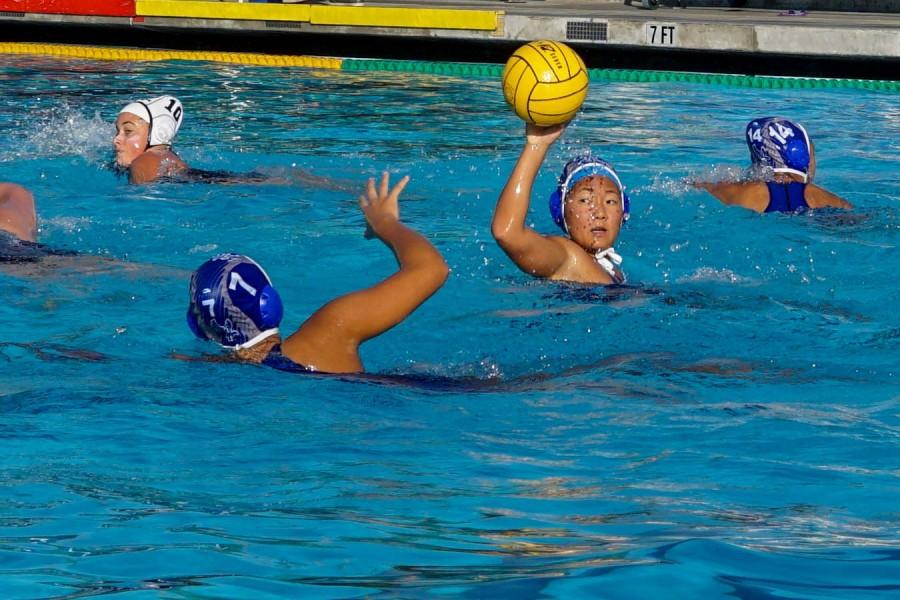 The girls water polo team won an exciting match 13-9 against crosstown rival Mountain View in the CCS quarterfinals, ensuring the continuation of their successful season.

After a tough loss against Los Gatos in the SCVAL league finals, the Eagles returned with intensive purpose, controlling the game right from the start. Throughout the match, Mountain View struggled to handle the Eagles’ pressure-based defense, and was generally unable to score off any unified plays, relying on shots from one or two of their players. On the other hand, the Eagles dominated both ends of the pool with the help of the entire team, making steal after steal and capitalizing on a variety of different offensive opportunities.

The first quarter, while balanced in scoring, belonged to the Eagles, who retained possession of the ball far longer than their opponents. Cohesive team defensive and quick reflexes allowed players like senior co-captain Christina Pao to steal the ball, shutting down the Spartans’ attacks before they could begin. On offense the game played out the same way, with Los Altos finding opportunities on almost every possession thanks to effective passing. Sophomore co-captain Julia Santos put the Eagles on the scoreboard with a hard nearside skip, followed by a series of quick steals that shut down the Spartans’ attempts on goal. 6 on 5 power plays on both sides yielded no goals, but senior Julia Suh was able to pull off a low skip that pushed the Eagles’ lead by another point. Mountain view replied with their own goal with thirty seconds left, ending the first quarter 2-1.

The second quarter played out in a similar fashion, beginning with a nearside shot from senior Ellen Roper that slid past the goalie. Steals from all players, including a leaping grab from sophomore Annalisa Pao, allowed the Eagles to control the tempo and momentum of the action. Strong defensive pressure made it almost impossible for the Mountain View players to even pass the ball. Julia Santos scored again with a quick spin-shot, burying the ball in the low corner of the goal. Mountain View replied with a lob shot, and later a five meter goal, but was outpaced by another shot from Ellen and a quick rebound goal in the last seconds of the half from Annalisa. The half ended 6-3, with the Eagles clearly in the lead.

The third quarter held a glimpse of hope for Mountain View. After an eight meter foul-and-shot from Julia Santos, the Spartans picked up momentum, scoring two back-to-back goals to bring the score to 7-5. However, their efforts were quelled by Julia Santos, who scored once from set, and then again off a steal and counter. Christina added her own top-corner shot to bring the score to 10-6, with the advantage to Los Altos.

The fourth quarter brought goals from both sides, but the Spartans’ one-off shots were no match for the Eagles’ deliberate, calm offense. Strong defense prevented an early Mountain View counter, and shots from Ellen and Annalisa brought the score in the back half of the quarter to 12-8. Senior Brittany Haley put the nail in the coffin with a nearside catch-and-shot, assisted by Julia Santos, and the game ended 13-9 with a win for the Eagles.

“I think that was a really great game for us, especially coming off of our last league game against [Los] Gatos,” Ellen said. “We came back and kept our heads in the game the entire time… I could feel the energy in the water.”

Coach Katie Buzzetta was also pleased with girls’ performance, and their ability to adapt to the pressure in the game.

“I thought that the girls were able to handle the adversity that the game threw at us very well, and in a very mature, high-level manner,” Buzzetta said.

The girls attribute their victory today to their solid, and much improved, communication in the water.

“I think [our success] directly correlates with how much communication we have,” Christina said. “As we started communicating more and moving more, we were able to not only shut them down on defense, but also get more opportunities on offense.”

The girls will further their CCS hopes in the next semifinal game, against season rival Los Gatos.

“There’s some work to go going into the Gatos game,” Buzzetta said. “It’s a team that we’re going to be seeing for the fifth time this season, and every time you play a team it gets harder.”