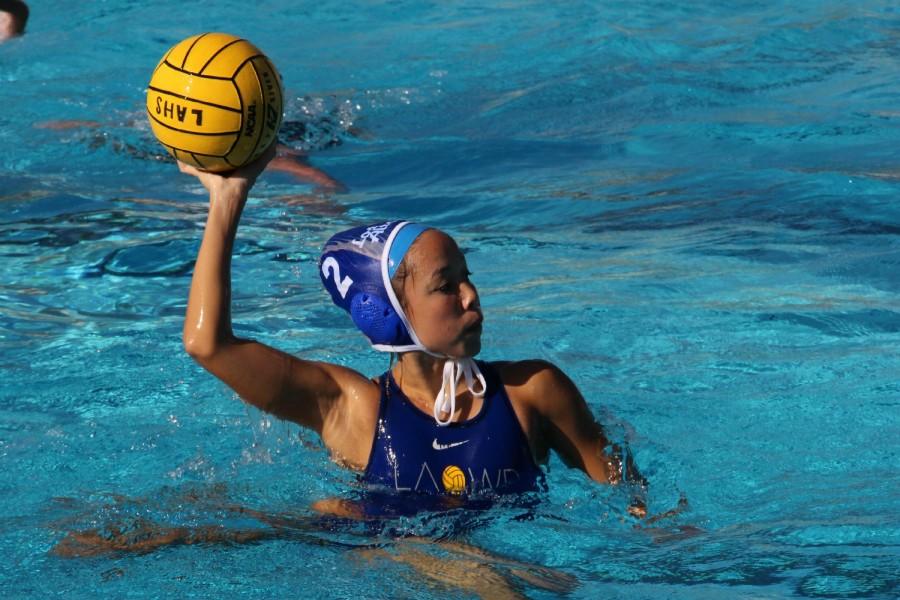 The Girl’s varsity water polo upheld its undefeated streak against Palo Alto today, October 6, winning 10-4. The Eagles suffered a loss against the Vikings earlier in the season in a scrimmage, but displayed their dominance in the water this time around in a game between the top two teams in the De Anza League.

The game began tensely in the first quarter, with no goals scored on either side. Both sides pressed so well on defense that it was hard to gain any offensive traction.

However, in the second quarter, the Eagles kicked things into high gear. After winning the sprint, sophomore co-captain Julia Santos drew a 5-meter penalty, and scored a high skip shot. Palo Alto replied quickly with a crafty catch and shot. Unintimidated by the retaliation, Los Altos rained goals in quick succession, with a two-meter shot from senior co-captain Ellen Roper, a 6-on-5 shot from sophomore Annalisa Pao and another 5-meter skip shot from Julia.

Defensively, the girls played a strong combination of drops and hard presses, but the defensive success was largely due to sophomore goalie Trinity Suh, who managed to prevent multiple shots from all angles.

“The bulk of the credit has to go to our amazing goalie Trinity,” senior co-captain Christina Pao said. “She saved so many good shots today.”

The half ended 4-1 with the Eagles in control and in high spirits.

The third quarter was all about Los Altos’ offense, led by junior Kaleigh Peterson who dominated the quarter with a series of three goals: a low, patient skip shot, a bullseye cross cage shot from nine meters out and a quick hand-transfer counter goal.

Palo Alto rallied and tried to respond with two goals in the second half of the quarter, but Los Altos was already beginning to emerge as the clear winner. Julia finished the quarter with a long-distance high corner goal as the shot clock ran out, and the Eagles led 8-3.

Los Altos won the fourth quarter sprint, and a quick goal from Annalisa further increased the lead to 9-4, and Kaleigh scored her fourth goal of the game in a quick spin and shot to bring the game to its final tally. Thanks to strong defense from the team as a whole, the Vikings were barely able to send off any shots. Those that managed to reach the goal were stuffed by Trinity, and the game ended 10-4 in the Eagles’ favor, putting them in first place in league.

“I was really excited to see everybody play and contribute to that win,” Christina said. “The girls went into it with fire, and we continue to keep pushing one game at a time.”

The girls’ next games is Thursday, October 6 at Lynbrook, and their next home game is Tuesday, October 13 against Los Gatos.