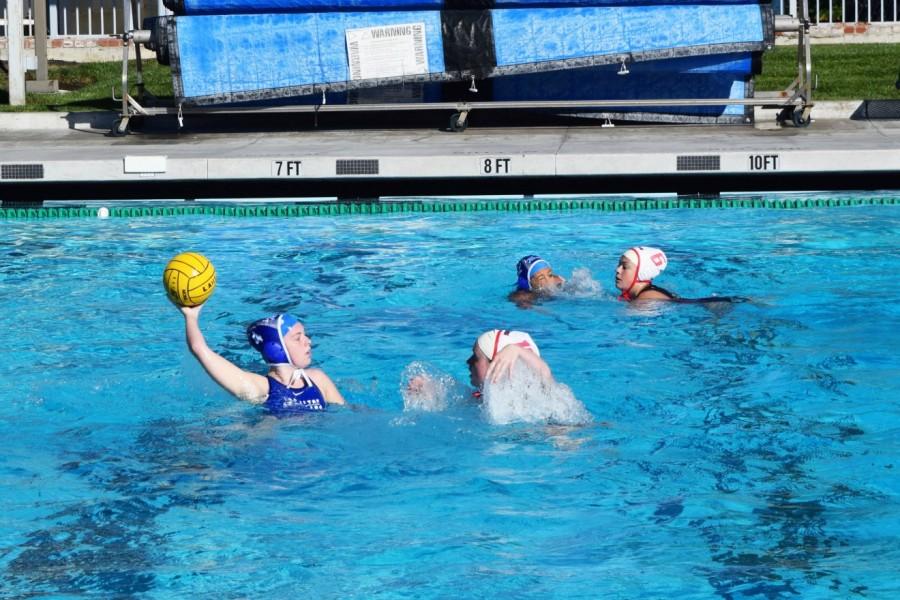 First place in the De Anza division. Over a hundred goals scored. Only one league loss. The varsity girls water polo team is dominating.

As of press deadline, the girls had recently made it to the SCVAL championship match, falling to Los Gatos to tie them for first place in the De Anza league. Despite the loss, their record gave them a high seed in CCS, which awarded them a bye for the first round. Their first game was against rival Mountain View, and while the team wasn’t going to overlook the Spartans, their goals were much higher than a single game.

“Our goal is to be in the CCS championship match,” senior co-captain Christina Pao said. “Every girl on this team has the heart to do it. We just know that we have to take each game as it comes.”

The team attributes the majority of their success in the pool to the players’ unified efforts.

“I think our biggest advantage is how well we work together,” junior Kayleigh Peterson said. “All of us know where a teammate wants the ball, [and] when they’re ready for the ball.”

The Eagles’ biggest strength is their spread of talent across the different players, which makes their offense difficult to defend against. While it is easy to stop one individual scorer, when the entire team packs as much firepower as they do, opponents are left scrambling to cope.

“Every person on the team can shoot,” Christina said. “We have really made ourselves a threat from all angles in the pool.”

Sophomore co-captain Julia Santos is leading the team in goals scored, but the spread is fairly equal. The nature of the team is balanced; movement and inclusive offense take priority over one-sided, “give it to the star player” plays.

“The team is on the smaller side, which gives us the ability to move faster on offense, drive more, and post up without having a [definite] set player,” Kayleigh said.

This success is the result of continual practice. Now, in the final homestretch of their season, the girls are benefiting from all of that hard work and team bonding.

“We’ve become more cohesive as a team,” Christina said. “Everybody knows each other’s strengths and weaknesses.”