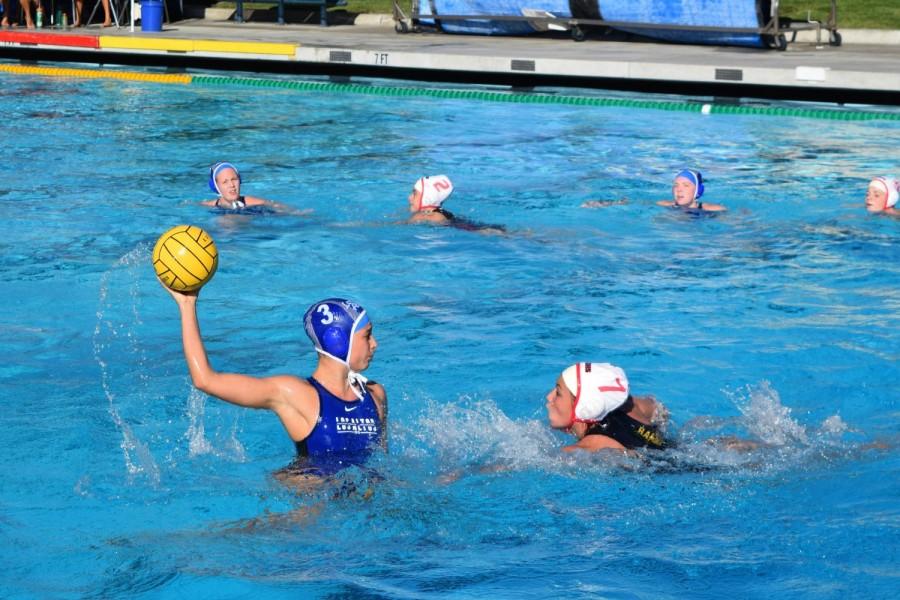 Junior Margo Lusinchi winds up for a shot. The Eagles dominated the Rams on both sides of the ball. Photo by Francesca Fallow.

On Friday, October 2, the varsity girls water polo team defeated the Willow Glen Rams in a home contest 13-3. This win places the team at an overall record of 8-5 and a league record of 5-0.

The second quarter began with two goals from Willow Glen within the first three minutes, but Julia responded with a goal of her own less than half a minute afterward. The pace of the half evened out after that, with both teams passing around the ball to maneuver for closer shots. Later in the quarter, junior Kayleigh Peterson scored to take an 8-2 lead with sixteen seconds remaining in the half.

Coming out of halftime, the Eagles attempted to slow the game down by setting up a half court offense and taking up more of the shot clock. Willow Glen scored an early goal, but junior Anne Piercey maintained Los Altos’ lead with a goal of her own, making the score at the end of the third quarter 9-3 in favor of the Eagles.

The Eagles went back on the offensive in the fourth quarter, with an early goal from Annalisa, which was followed in quick succession by goals from Kayleigh, Margo and Anne to put the game away at 13-3.

In a game that saw high offensive output, the Eagles benefited from a faster, more aggressive defense that allowed them to limit the Rams’ offense and let them counter quickly.

“On defense, we did a hard press throughout the entire game and that really showed that we would be able to press people out and they would not get… so many balls on Trinity,” Christina said. “We have been working on that throughout the season, so it was good to see that that has manifested into wins here.”

The team’s next game is a conference matchup on Tuesday, October 6 at home against Palo Alto.