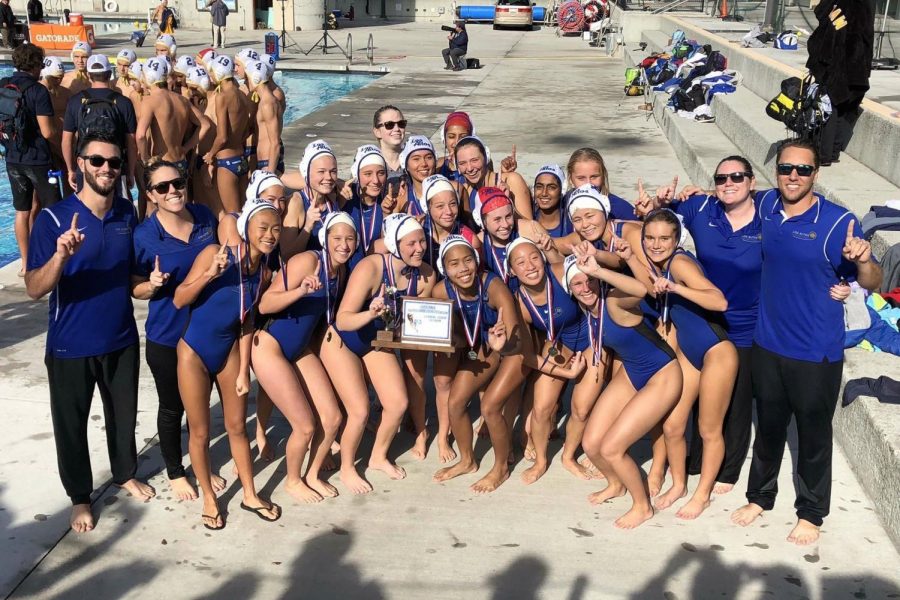 The Eagles pose with their Division I CCS Championship trophy. Captain senior Julia Santos called the match the best of their season, with consistent defense and offense through all quarters.

In Los Altos’ last three meetings with Mountain View’s girls water polo team, the Spartans have consistently dominated Los Altos in the first quarter, finding margins as large as 8-3. In yesterday’s CCS Division I Championship, Los Altos left the first quarter with a 1-0 advantage for the first time.

That scoreline set the tone for a long, hard-fought game of narrow leads that made every goal count. But with four goals from captain senior Julia Santos and one of the team’s most consistent defensive performances of this season, the Eagles took home the title with a score of 9-8.

Coach Katie Buzzetta attributed the win over Mountain View to the tactics the girls have been drilling this past week.

“We know that they are a very respectable team and every girl that plays can whip the ball,” Buzzetta said. “We wanted to try and force them to shoot when we wanted and under our terms and not let them get too comfortable getting the counter up on us. The girls came in, we executed our game plan, and we came out with the W.”

The teams went toe to toe at the start of the first quarter, sizing each other up as they passed up the sides and taking their time to set up the shot. It seemed neither team had a clear advantage, but Los Altos’ quick passing game kept Mountain View from the kind of walkover they’d become used to. After multiple shots from both teams went wide and one close-range save from Los Altos’ goalie junior Alex Warren, the Eagles struck first with a goal from Julia off a foul in front of the Spartans’ cage. It was a start to the game neither team expected, Julia said.

“It was insane,” Julia said. “We caught them so off guard that we saw everyone on the other team’s reactions and we were thinking, ‘Oh my goodness, we are a completely different team right now, and that’s amazing, and if we keep that up, we can play a good game and even win.’”

The first quarter picked up the pace as it neared its end. Both teams began sprinting on counterattacks, sending long and taking shots from afar. In the final play, aggressive defense even caused Mountain View to lose a two-on-one in a counterattack.

The second quarter started with a block inside the two-meter line from Alex, which the Eagles converted through a long pass for a close-range wet shot from Julia. From there, minutes of back-and-forth action were punctuated by frequent shots, with Los Altos’ offense frequently dropping all the way back to cover passes around by Mountain View. For one long stretch, Los Altos kept the ball in Mountain View’s half, passing around the perimeter, taking shots and intercepting Spartan passes until Julia put a goal in from one of Brynn’s rebounds, making the score 3-0.

But Mountain View made a quick comeback towards the end of the quarter. After two quick shots — one from an undefended drive into the two-meter zone and one mid-range shot from the center — the second quarter ended with a score of 3-2 Los Altos.

Both teams came back from halftime determined to strike first. Los Altos delivered; soon after a top-corner goal from Julia, sophomore Silke Tuyls, given space on the right flank, sniped the near corner from a tight angle, eliciting loud cheers from Los Altos’ crowd. But Mountain View came back again, scoring on back-to-back plays with a narrow deflection from the goal post and a wet shot under Alex’s arm to make the scoreline 5-4.

For the rest of the quarter, the Eagles slowed the game down. They passed around the perimeter until sophomore Olivia Cairns sniped the far corner of the cage, sending the Los Altos crowd into a frenzy. The teams settled into a mid-tempo passing game — until an unexpected long shot hit the crossbar and went in for Mountain View, leaving Los Altos with a narrow 6-5 lead.

Midway through the fourth quarter, it seemed that Los Altos had sealed the deal. A long shot from Brynn found the net before the goalie had a chance to react, and a second precision shot by Olivia made the score 8-5.

But after calling a timeout, Mountain View came back with a vengeance. Defensive mistakes allowed the Spartans to score three goals in rapid succession, completely erasing the Eagles’ lead.

“[I was saying,] we got to make sure we’re coming back, we’re not allowing girls to score or attack in with wide open looks at the cage,” Coach Katie Buzzetta said. “I think [it was] just kind of that mental fatigue with us knowing what we were supposed to do. Neither team’s really subbed too much in there, so to play 28 minutes of water polo can be very tiring. [We had to get] everyone back on the same page.”

With a couple minutes left on the clock, both teams played carefully, running down shot clocks in an effort to find a game-winning look. A tense close-range block from Alex on a Spartan breakaway kept Los Altos in the running. Finally, a pass out to junior Cynthia Yee gave her a split second for a shot that connected with the top corner, causing a roar from the Eagle crowd.

In the last minute and a half of the game, both teams called for time-outs, no doubt searching for a last-minute strategy to either seal or tie the score. Los Altos spent the last twenty seconds passing around the back, the Mountain View coaches shouting at their players to pressure the players with the fuel they had left. When the buzzer sounded, the Eagles cheered, and the entire team and coaching staff jumped into the pool to huddle and celebrate their win.

“There were some moments where we really thought we were going to win and then we lost the lead, but we still stayed focused and played the same water polo to maintain that lead,” Julia said. “When the ending buzzer blew, so many different emotions came over me and I honestly couldn’t believe it.”

For Julia, the match was a high water mark for the season — and not just because of the title.

“We’ve really struggled with putting together four full quarters of water polo,” Julia said. “This is the one game in our entire season where we played a strong offense and defense for every single second of [every] quarter.”