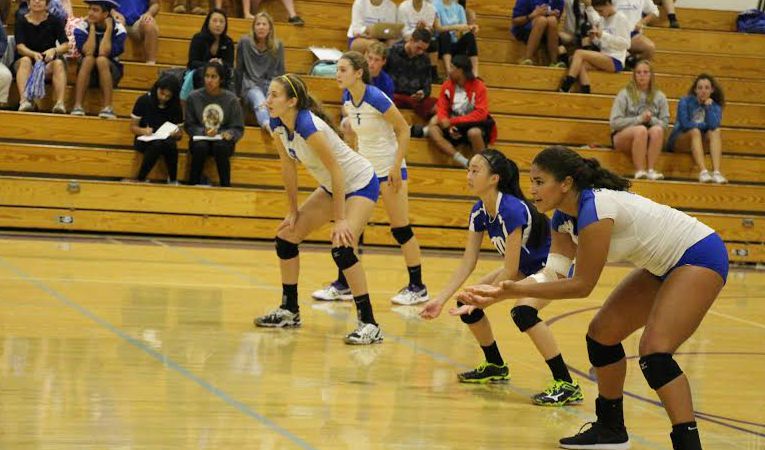 Girls Volleyball lines up to defend a serve. Photo by Allegra Maeso.

On Wednesday, September 16, the girls varsity volleyball team triumphed over the Leland Chargers in its second home game of the season. Reeling from a shaky loss to the San Benito Haybalers, the Eagles earned their first win of the season, taking a 3-0 victory.

The Eagles started off stronger than ever with a clear nine point lead. Although the Chargers put up a tough defense with steady blocking, junior Katherine Mumm pushed Los Altos ahead with a few clean spikes, and the Eagles took the first set 25-16.

Despite a slow start to the second set, Los Altos came back with good team communication and strong serving. Led by multiple aces by senior Megan Wilhem, the Eagles took the set 25-20.

“I think our best strength tonight was serving for sure. We’re known for being a really good serving team so I think we delivered that today.” Megan said.

The third and final set began neck-and-neck as both teams rallied back and forth. However, good team play punctuated by key kills by senior co-captain Alexis Malgesini helped  Los Altos come out on top 25-14.

The Eagles will play their next home game on September 22 against Los Gatos.