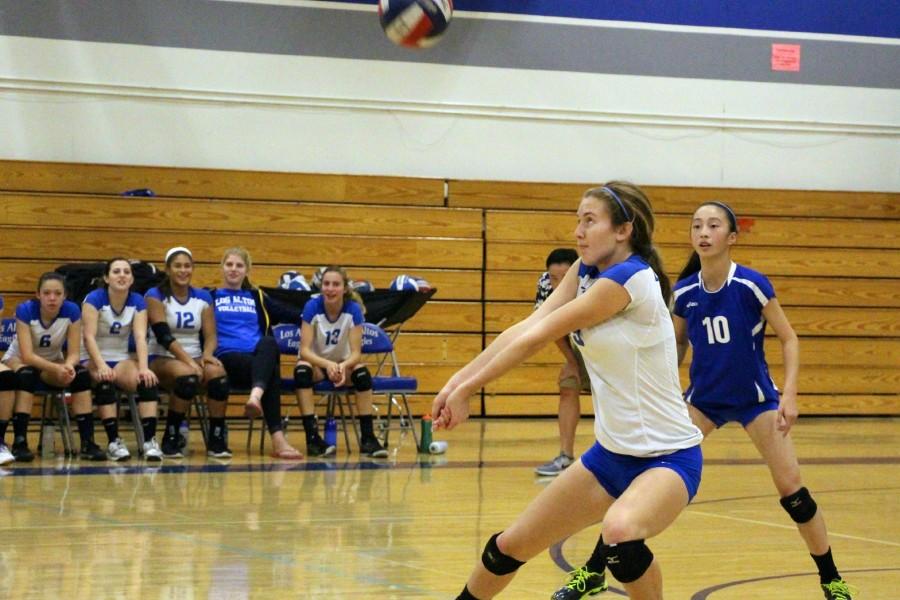 The girls volleyball team took down Homestead today, October 27. In a tough, scrappy game, the Eagles came out on top three sets to one.

The first set started off close, indicative of the match to come. The two teams battled to a 20-20 tie, but four straight Mustang errors and an ace from senior co-captain Sarah Callan gave the Eagles a 25-20 win.

The second set was even closer than the first. Aside from a quick Los Altos run giving the Eagles a 13-10 lead, neither team was able to lead by more than two points at any time in the set. Los Altos looked to be in position to take the set after a quick rally fueled by two kills from senior co-captain Lulu Kishton, but they were unable to pull it out, and Homestead took the set 24-26.

Despite the third set starting off like the previous two, Los Altos was able to jump out to an 11-6 lead, forcing the Mustangs to call a timeout. The stoppage ended the Eagles’ momentum, and Homestead clawed its way back to tie the game at 14-14. The teams went back and forth for a bit, but multiple Homestead errors and clutch plays by the Eagles turned momentum back in Los Altos’ favor, and another kill from Lulu ended the set with the Eagles on top 25-20

Los Altos finally broke through in the fourth set. Again aided by sloppy play from the Mustangs, the Eagles were able to jump out to a 24-14 lead. Homestead tried to mount a last-minute comeback, but sophomore Hanadi Nassif put the game away for good at 25-19 in favor of Los Altos.

“Overall, we stayed together through tough moments where we were losing momentum,” Lulu said. “We did a pretty good job of not getting down when that happened.”

The win puts the Eagles’ record at 8-1 in the De Anza League and keeps their first-place status in the league safe for now. Their next game is one Thursday, October 29, and their next home game is Tuesday, November 3 against Gunn.