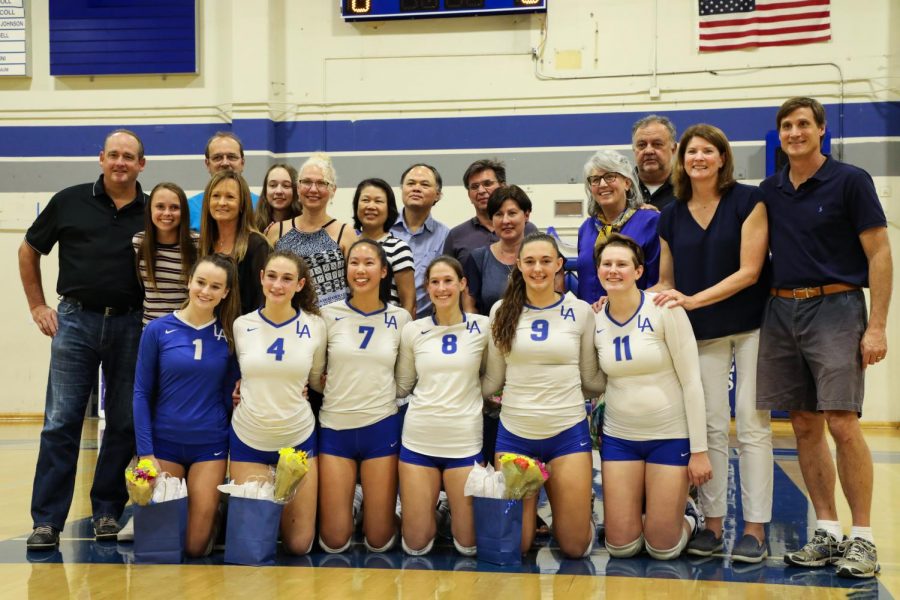 On Thursday, October 24, the varsity girls volleyball team celebrated their six seniors during senior night during their rematch rivalry game with the Mountain View Spartans.

The girls shared heartfelt hugs and even shed a tear or two while they spent their last time in the gym together giving speeches to the seniors about their time on the team. Seniors Alice Kutsyy, Claire Kwok, Katie Kishton, Megan Corley, Raluca Nistor, and Sydney Enthoven remembered the bonding experiences they had together over the past season.

“This has been a constant in my life,” Katie said. “I see our coaches, I know this gym inside and out. I’m going to miss the security of being able to come here everyday and relax.”

After celebrating their six seniors, the team warmed up and got ready for their second match against Mountain View. Their previous down-to-the-wire match ended in a loss in the fifth set for Los Altos. Since then, the Eagles had worked on their setups for spikes and their ability to work together as a team.

With Katie, Claire, Sydney and Raluca up to play at the start of the first set, the two teams  scored points in succession, keeping the score tied. However, the Spartans broke this streak with tricky tactics such as tipping the ball over a net instead of spiking, bringing the score to 11-17. Although the Eagles stepped up and started scoring more points, capitalizing on Mountain View’s missed serves and out-of-bounds shots, they weren’t able to gain enough momentum and the set ended 16-25.

Going into the second set, Mountain View created a lead of 5-9 by sending spikes over the net that Los Altos struggled to return. However, the Eagles were able to score 11 points in a row, taking advantage of Mountain View carelessly hitting shots out of bounds and missing dives for spikes, blasting the score to 16-10. This lead carried them to the end with a score of 25-17.

The third set was the closest set the Eagles had this season, and the teams were neck-and-neck for most of the set. The large crowd of students and family members were frozen in anticipation during the lengthy rallies and exploded in cheers at every point scored by the Eagles. The score was pushed past the usual 25-point winning cap because neither team could achieve the 2 point lead needed to win. The set finally ended at 29-31 after the Eagles lost two quick points by hitting the balls just out of bounds.

After losing the hard-fought set, the Eagles huddled together and prepared to give it their all to win.

“We knew that if we lost the fourth set it was going to be our last one, so we gave it our all,” team captain Katie said. “We had to go for it no matter what.”

Fueled by this motivation, the Eagles scored twice as many points as the Spartans in the fourth set, with a final score of 25-12. They hit powerful serves and set up aggressive spikes throughout the set.

In the final set, only 15 points and a lead of 2 are needed to win. The Eagles kept up Mountain View until the score reached 11-11. Exhausted by two and a half hours of play, the Eagles were unable to return three quick spikes by the Spartans, bringing the score to 11-14. After fouling with an out of bounds ball, the game was over.

“We just all had a great time, and this was a night to celebrate seniors,” Katie said. “We got to enjoy playing volleyball with our teammates for the last in this gym.”