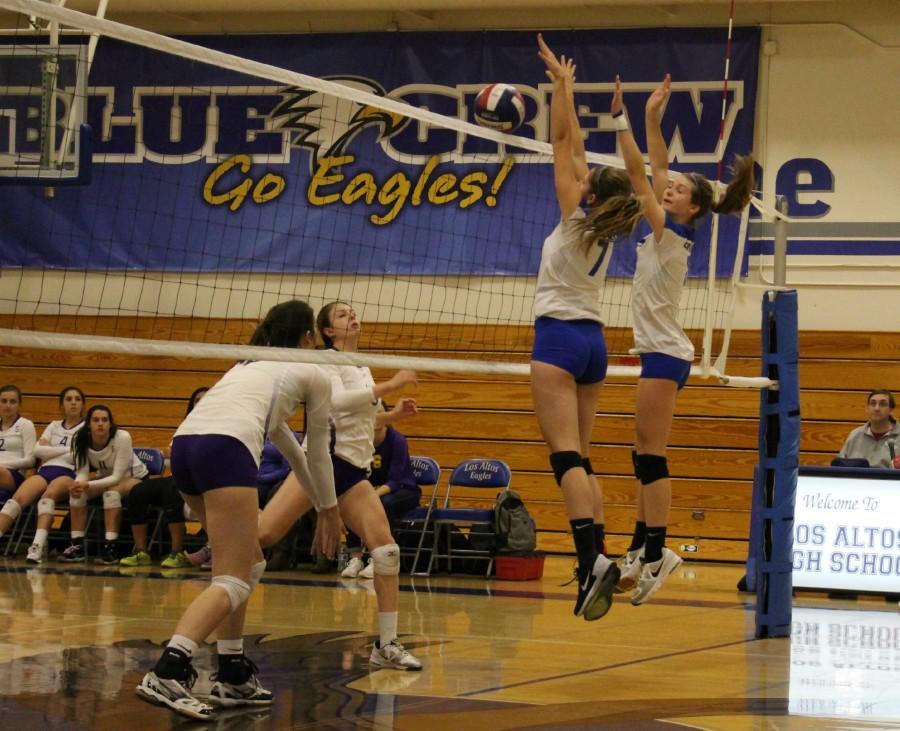 On November 14, the girls volleyball team flexed their number-one seed muscles over the Salinas Cowboys in their CCS Quarterfinal win. This victory will move Los Altos on to the semifinal of the CCS Division Ⅰ tournament.

The first set was opened up by a series of back-and-forth rallies leading to the two sides locked at 7-7. However, Los Altos was able to settle into their groove and began to pull away behind senior co-captain Louisa Kishton who had 6 kills in the first set. Add that to an ace from freshman Kaitlyn Wong, and the Eagles were able to build an insurmountable gap between them and the Cowboys.  Los Altos finished off the first set on a strong kill by junior Katherine Mumm, with a score of 25-17.

“I think they were a pretty challenging team, however we really pushed and played well overall,” senior co-captain Megan Wilhelm said. “Kat and the block really stepped up and were a key factor for the win.”

Los Altos came out in the second set looking to continue their success, yet Salinas was not going down easy as they were able to keep the score even at 5-5. The complexion of the set changed significantly after a huge instinctive dig from Kaitlyn. From there, momentum was on Los Altos’ side as they went on to build a four point lead. The Eagles were able to maintain that lead, winning the set by the score of 25-19, after another finisher from Katherine.

Consistent with the rest of the game, the third set started out with the two teams trading points to 6-6. As the pressure built on Salinas, they committed a series of costly unforced errors. Los Altos was able to take of advantage of this and gained a lead of 12-7. Los Altos began playing shut down defense and took a commanding 18-9 lead after a authoritative block from sophomore Hanadi Nassif. With their backs against the wall, Salinas showed their grit by leaving their heart on the court every point. This was highlighted by a drawn-out rally that was ultimately won by Salinas and left the fans from both sides cheering in disbelief. Nonetheless, it was too little too late for Salinas as Los Altos was able to hold on to the lead and took the set by a score of 25-21.

“We need to work on finishing and not letting up when we are close to 25,” senior setter Sarah Callan said. “We tend to relax and let the other team come back with a few runs before we finish.”

“We need to bring our best game [to the semifinals] and not expect to win,” Sarah said. “We need to stay calm and take it point by point.”