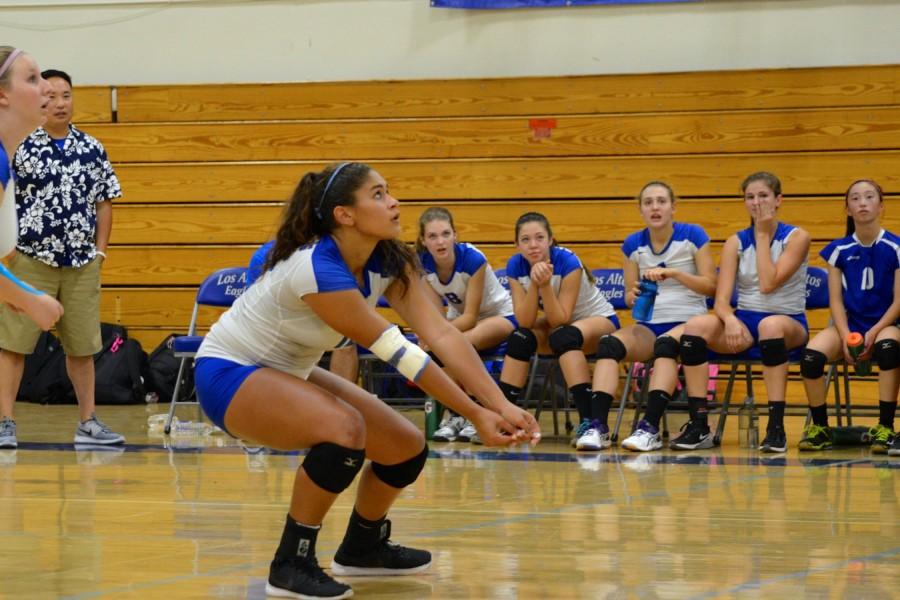 The varsity girls volleyball team lost a well-fought match against Saint Ignatius on Monday, October 12. Despite the game not counting for league standings, the Eagles saw the game as an opportunity to test their play against better opponents outside of the league.

“This was a non-league match, so it was more [about] playing a really good team and getting that exposure to a strong team,” varsity head coach Peter Kim said.

Los Altos’ numerous unforced errors in the first set contributed to a 25-17 loss.

“In the first [set] I don’t think we were as focused when we started,” Kim said. “[Errors] happened, but you know it’s part of the game… when we get frustrated, that’s where we committed a lot more errors.”

Coming from the break between first and second sets, the Eagles made fewer unforced errors and improved on their focus. They won the set 25-18 on a 20+ shot rally.

Although they eventually lost the third set 26-24, Los Altos challenged Saint Ignatius to the end, holding off two set points to stay in the set, and dropped the fourth and final set 25-20.

“Saint Ignatius is a good team… and we fought,” Kim said. “We were in every set, we won a set… it was a good match. Obviously I am not happy about the loss, but I am happy the energy and the effort that we put out.”

With the season in full swing, Los Altos maintains high hopes for the remain games, and with a strong 14-5 record, the Eagles are poised to finish the season on top of the league.

“We should win league,” Kim said. “Or at least be in the top three… [to] get the automatic bid to CCS and to the playoffs.”

The team plays tonight, October 13, at Gunn. Its next home game is Thursday, October 15 against Mountain View.