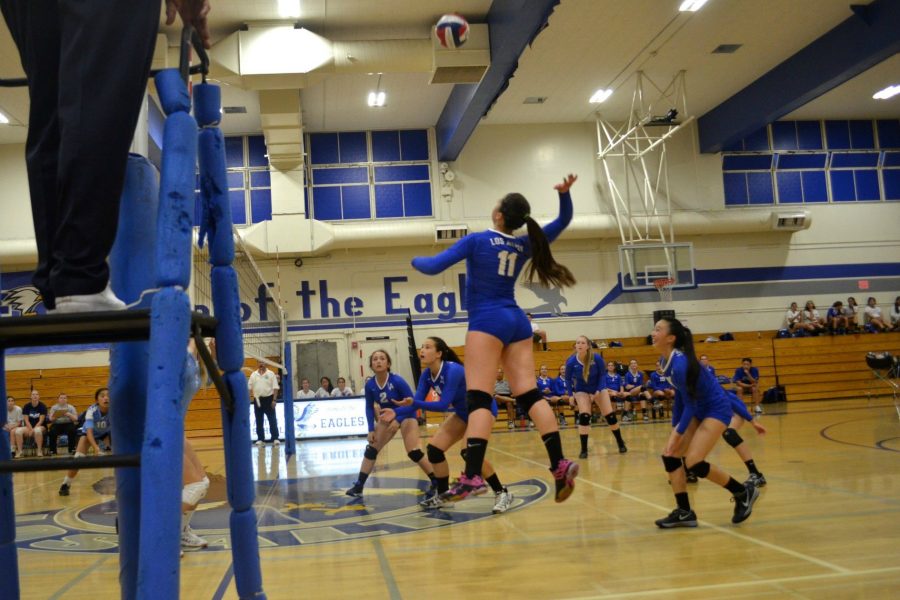 On Tuesday, August 30, the Los Altos Eagles girls volleyball team dominated the Leland Chargers, winning the match 3-0 in their first home game of the season. Despite the loss of multiple seniors and a subsequent addition of many new players to the roster, this year’s team was able to come together quickly and play cohesively as a unit.

“We lost a lot of people last year which is sad,” co-captain senior Kate Carlson said. “But at the same time, with a young team, there’s so much potential.”

Los Altos took the first set ending with a final score of 25-11. The combination of a powerful offense in the form of well-positioned kills along with consistent defense from the back row gave Los Altos the edge in this set. Good judgment played a large role in the Eagles’ success during the night. While players are expected to be aggressive and save the ball from the touching the floor every time and at all costs, the Eagles won this game because of knowing when not to go for the ball. Los Altos was awarded 8 points throughout the first set due to their ability to recognize and anticipate if the ball was going out of bounds and by making the decision not to go for it

“We really played together and were communicating on the court,” junior Jamie Kesten said. “We didn’t have any dropped balls and everyone knew their job which really worked well for us”

In the second set, Los Altos immediately took a 6 point lead over Leland which they maintained or exceeded throughout the set. A major downfall for the Chargers was the number of points lost on technical calls such as double-touching or stepping under the net. In addition, the Eagles’ consistent serving and multiple aces brought to light Leland’s issues with serve-receive: communication errors and gaps in their formation which allowed playable balls to drop untouched. The set ended with the Eagles winning 25-11.

“[Leland] had a bit of miscommunication back row where they weren’t sure who was taking what…” Kesten said. “They didn’t serve strong enough to get us out of system.”

Once again, the Eagles took the lead in the start of the third and final set due to a long serving streak by junior Aevia Trainor. Well-positioned kills aimed at Leland’s open spots resulted in many points for Los Altos in this set, and the final score was another Eagle victory of 25-9.

“[The rest of the season] is going to be tough,” head coach Peter Kim said. “We have an opportunity to win league again, but it’s just a matter of that we gel quickly [and] we play as a team… I think we are going to have a really good year.”