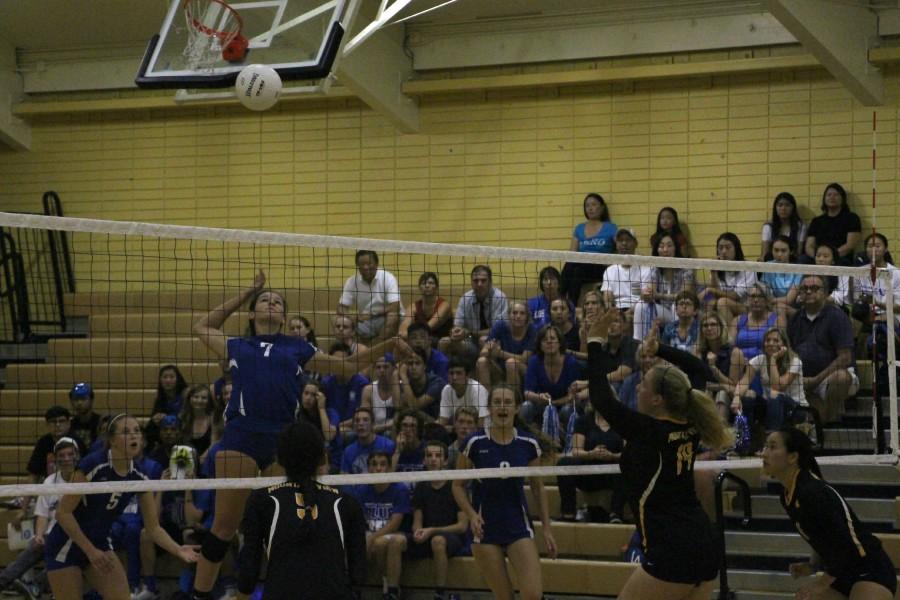 Junior Kat Mumm lines up a spike. Though each set was close, the Eagles ultimately fell 3-0 to Mountain View. Photo by Josh Kirshenbaum.

In a battle of grit, passion and intensity, the girls volleyball team was defeated by local rival Mountain View 3-0 today, September 24. This was the Eagles’ first loss in league play, leaving the team with a 2-1 record overall.

“I think it was a tough game, [but] we didn’t give up even though we were behind a lot,” senior setter Sarah Callan said, “We kept trying to come back — we just had trouble pushing ahead and getting a lead.”

The first set was very tight as the two teams traded points until the end. The Eagles were able to take a 23-22 lead after a block by senior co-captain Megan Wilhelm, but the Spartans were unfazed and came back to take the set by the score of 25-23.

In the second set, the Eagles fell behind quickly after a string of Spartan aces and Eagle errors.

“[The] bottom line is we made too many unforced errors,” senior co-captain Alexis Malgesini said. “Our offense gave them too many easy balls, which enabled them to terminate the play first.”

Led by Alexis and fellow senior co-captain Lulu Kishton, who finished with 15 kills on the night,, the Eagles surged back into game, closing the gap to only four. However, the Spartan’s lead proved to be too much as they won the set 25-21.

For the duration of the third set, the Eagles kept it close but we never able to take the lead. Down 20-16, Sarah converted a clever dump that injected energy back into the team. Still, the Spartans were able to take advantage of the Eagles’ errors and maintain their lead, eventually closing out the set, and the game, 25-20.

Despite the loss, the team views the game as a good learning experience.

”I think this loss really showed us where we are weaker,” Sarah said. “Now we can go back to practice and fix these things so we improve for our next games”

One positive from the night was the atmosphere created by traveling members of the Blue Crew, who showed up decked out in blue and filled with spirit.

“The Blue Crew was amazing tonight,” Alexis said. “Even though we lost, it was really motivating to have the crowd behind us and we hope to see more of it in the future.”

The girls volleyball team’s next match will be in a tournament on Saturday, September 26 against Marin Academy. Their next league game will be at home on Tuesday, September 29 against Palo Alto.