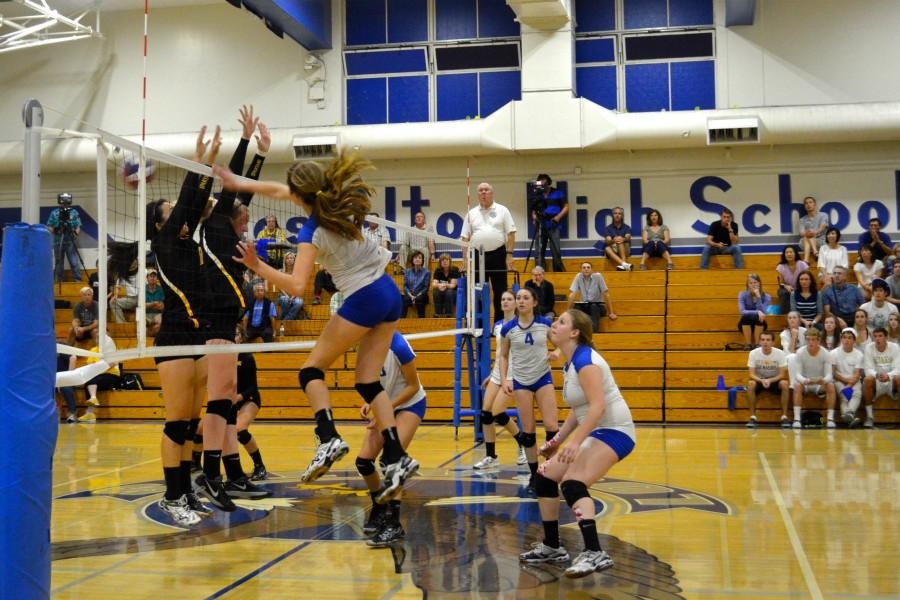 On Wednesday, October 15, the varsity girls volleyball team defeated the Mountain View Spartans in 4 sets. This win is a huge momentum boost for the Eagles as it gives them a 6-1 record and a first place seeding in the De Anza League.

The Eagles jump-started the first set with an ace from freshman Kaitlyn Wong, which led to a five point run by the Eagles, giving them an 8-6 lead. From there, the two teams traded points until senior Sarah Callan served two aces within three serves, which stretched the lead to 18-10. The gap turned out to be insurmountable as the Eagles finished off the set with an authoritative kill from junior Katherine Mumm. The final score of the set was 25-15.

“In general everyone playing did their part and executed it without making many errors,” Sarah said. “Everyone’s hitting was on and so we were able to end rally’s fast.”

The Eagles came out strong at the beginning of the second set. With three kills and a powerful block, Katherine lead a charge by the Eagles to obtain a quick 11-5 lead. However, Mountain View was able to recover quickly and pulled the score back to 12-11 for the Eagles. The teams then traded points to 17-15. The Eagles were fueled by huge second sets from senior co-captain Alexis Malgesini and junior Lauren Limbach and took the set by a score of 25-21. Los Altos finished the night with four hitter in double-digit kills

“We spread the ball around a lot which was key,” Alexis said. “It made our offense less predictable and therefore harder to defend.”

Lauren had a breakout performance on the night as she totaled a career high 12 kills on only 21 attempts.

“This was my second game playing [on the] right side,” Lauren said. “I really felt a lot more comfortable hitting on the right side. Everything felt better when I was on the outside rather than in the middle.”

“We got a little too comfortable since we won the first two [sets],” Sarah said. “That lead caused us to make a few more mistakes and Mountain View’s energy went up a lot because of that.”

Sarah energized the entire gym as she had an eight-serve run which included three more aces in her the first five points of the fourth set and opened up an 8-0 lead. Once again, Mountain View was able to claw back into the game and equalized the score at 12-12 and even went on to take a 12-14 lead. With the lead constantly changing, the intensity was at a high when the score was tied at 17-17. After a couple of clutch kills from senior co-captain Louisa Kishton, who finished the night with 21 kills, and some strong play from Mountain View, the two team found themselves at a stalemate with a score of 24-24, making the fourth set a win-by-two situation. After a forceful kill from Mumm, the Eagles just needed one point to clinch the win. The Eagles got just that after a Mountain View player hit a ball that was ruled out after initially being called in by the referee, sealing the Eagle victory at 26-24.

The Blue Crew, who were dressed in all white tonight, erupted at the end of the game and showed their support for the team.

“Energy was consistent and strong,” Alexis said. “The Blue Crew provided a lot of the energy and helped us stay pumped.”